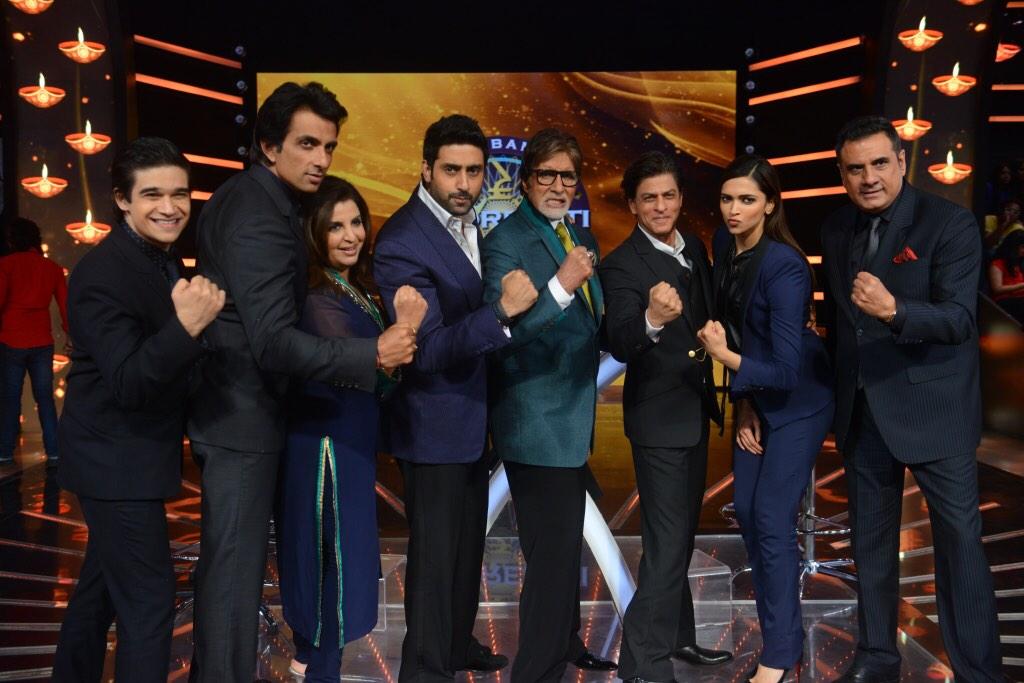 Happy New Year movie team are the special guest on Kaun Banega Crorepati for the Diwali Special. The HNY team makes a quiet entry with torch lamps and takes out the PCs from the stage and then SRK and Abhishek goes into Big B’s room and takes/steals some clothes as well. SRK also finds Big B’s pen and takes it.

All HNY team are wearing black shades as eyewears and all dressed up in suits except Farah. They come on the stage with Big B’s belongings and finds Abhishek to not there with them and then Big B brings out Abhishek and suggests on getting hold of the thief. Deepika, SRK asks how Abhishek (AB)  has been caught ? Abhishek informs of getting caught when he visited to say Hi to his father. Big B then asks who is the thief in HNY team ? Deepika speaks of calling Big B as Baba thus can’t steal from him. Big B thanks her for reminding his age. Boman speaks of playing a corrupt policeman in an earlier movie with Big B thus can’t steal and Sonu Sood calls himself as Bhakt of Big B and then goes on to his knees and makes a bow at Big B. Vivaan speaks of being the son of Naseer Uddin Shah and thus cannot do anything commercial. On that note, Big B and others have a laughter. Farah comes on stage and takes the blame on herself and suggests that her cast got the habit of stealing after working in the movie for 1 1/2 yrs. After Big B’s insistence, the HNY team puts back the PC’s on the hot seat. SRK and Deepika sits first on the hot seat with Big B. SRK speaks of copying Big B and will never steal. Big B calls SRK and Deepika as thief who steal people’s heart and calls SRK as Dhamaka Daar Superstar Shah Rukh Khan and Deepavali Chamakdar Phulgadi Deepika Padukone. Big B speaks that Deepika had played the role of Leela in her movie Goliyon Ki Rasleela Ram leela while SRk had played the role of a monkey in Ram Leela play. SRK speaks of Ram Leela plays during his younger years in Delhi organized by Chhabria.

SRK speaks of chanting Hanuman hymns in the play. Big B asks SRK about the story of his movie Happy New Year where he alongwith Deepika are playing as thiefs. SRK speaks that HNY is a heist film and to accomplish their heist mission they needed to participated in World Dance Championship. They are all bad dancers and thus bring a bar dancer Mohini as their teacher. She teaches them dance but doesn’t know that they are all learning dance to carry out the heist. SRK makes a witty remark that Big B needs to come to watch the movie since his son Abhishek is also in the film. SRK speaks of donating the winning amount on KBC to Prime Minister’s Relief fund. The second question is how many characters is the maximum length of a Tweet on Twitter ? Deepika replies 140 which is correct. Farah thinks that SRK is revealing much on the plot of her movie but when Big B asks SRK on how has he entered the dance competition ? SRK speaks of the plot by putting his finger in the mouth so as to speak in a manner that people including Big B couldn’t understand. Big B also does the same finger-in the mouth talking before the 3rd question. The 3rd Q -> Brothers-in law Burton Baskin and Irvine Robbins started out in what business ? Deepika is quite confident on knowing the answer even before the options. Deepika speaks Ice-cream as the answer which is correct and wins 20 K INR. Deepika goes back on the lovely song.

Farah comes next and calls Abhishek as the most rowdy person who lives with Big B. Big B speaks that his son is very decent and innocent. Farah calls Abhishek as 6 year old and her favorite and refers him same like her 6-year old son. SRK shares an experience when Farah told him to intervene since Abhishek and Vivaan were teasing her and putting her photos on facebook. SRK went to speak with them and then pondered that Abhishek’s father is Big B and Vivaan’s father is Naseer Uddin Shah and if they aren’t able to teach their sons then how could he able to tell them to change their mischievous behavior so he stopped. The 4th question is to identify the singer, Mai Tenu Samjavayi..song.. and Farah replies Alia Bhatt which is correct. Big B speaks that Alia sang that song for the movie Humpty Sharma Ki Dulhania. The 5th Question is Which is the tallest building in the world ? Farah replies Burj Khalifa and Big B tries to pull her leg and then speaks that her answer is correct and its height is 828 metres and has more than 160 storeys. Farah and SRk grooves and dances on stage on the Dard E Disco song. Both are very much synchronized in their dance moves and does very well.

Abhishek comes next and Big B asks him How does he like KBC ? Abhishek replies in candid manner that its nice and also Big B is good and does lot of hard work. Abhishek show more style and dons the character of Nandu. Abhishek speaks on telling to Sony TV that if there is some problem with Big B hosting KBC then he will manage along with SRK. Big B then gives a witty reply to their veiled praise by showing a childhood photo of SRK where he is seen only in small nickers and calls it nude photo of him. SRK then shows a photo shot of Big B with actress Zeenat Aman in a swimming pool from the movie Don. SRK speaks on bringing that Big’s B photo of swimming pool to take an autograph. Big B speaks after the shot he just left on his way and Zeenat Aman left on her way. SRK suggests that Big B was the only actor who was present with her in the swimming pool and didn’t look at her. The 6th Question is In which sport have the sisters Susan, Sofia, and Judit Polgar been highly ranked players ? SRK chooses the audience helpline and then gives Chess as the answer which is correct. Big B speaks that Judit Polgar was a child prodigy and she was the No 1 women chess player in the world and all sisters were from Hungary. The 7th Question is – In which modern-day country would you find the ruins of the ancient city of Babylon ? SRK replies Iraq which is the right answer but Big B pulls the leg of SRK by suggesting they had 3 helplines. Before Big B replies it is correct, Abhishek gets up and speaks that the answer is correct.

The 8th question, What nickname has the western media given to the 2014 pro-democracy student movement in Hongkong ? SRK speaks of giving the Nagin step and then goes on to show some Nagin step with Abhishek and shows to Big B. Abhishek in his Nandu style speaks that the step features in the movie and Farah suggests that Abhishek took 1 year to learn that step on lighter note. Abhishek speaks the Nandu’s dialogue – Engliss.. Engliss.. Abhishek speaks that the answer to be Umbrella Revolution which is the right. The students were using umbrella to protect themselves from police’s pepper spray. Abhishek speaks of finding the answer from his father’s blog. Big B writes his blog almost every night around 2 to 3 am before he goes to bed. SRK then speaks about knowing Big B since 15 to 16 years and he got love from him and Jaya Bachchan (Jaya aunty). SRK then suggests that whenever he used to find Abhishek and his sister Shweta he thought that his children also grows up to be like them. SRK then asks Big B how he has developed a friendly bond with his son Abhishek ? Big B replies that when Abhishek was born he made up his mind to refer his son as a friend and also there is an old saying that when a son wears a father’s shoe he turns into a friend.

Big B speaks to Boman that he is playing the role of elgible parsi bachelor in the movie HNY ? Boman replies that all Parsis are eligible bachelor then big B asks why didn’t he got a Bachelorette ? Boman replies on not having the budget for it. Big B thinks Sonu to be the prankster in the movie and Deepika informs that Abhishek is the actual prankster and calls Big B to be mistaken. Sonu, Boman pulls the leg of Farah when Big B was speaking on pranks. The 9th Question for 12.5 Lakh INR and it is – Which of these bridges completed its 100 years in February 2014 ? SRK takes the helpline of 3 experts who gave the answer to be Pamban Rail Bridge and he chooses their answer and Big B replies that its the correct answer. SRK speaks that he has brought a present for Big B to celebrate his 72nd birthday and reminds that Big B completed 72 years some days back. That present is 73 long playing records of Big B’s movies and then SRK, Abhishek and all sing the Happy Birthday song for Big B. SRK greets Big B by touching his feet and Abhishek showers a warm hug to his father. SRK speaks that Abhishek and Big B will dance on Nonsense Ki Night song which is constructed by translating the hindi proverbs into english and Farah thought about it. The song fits well since the plot deals with World Dance Championship. One of the Hindi proverb – Bandar Kya Jaane Adrak Ka Swaad which literally translates to Oh Monkey what Knows.. Oh Flavor of Ginger..Abhishek and Big B then grooves on Nonsense Ki Night song and Big B follows the dance step of his son and SRK and rest of HNY Team dances in background and looks at Big B and Abhishek’s dance. KBC ends on a happy note with HNY team dances on the Indiawaale song with Big B.