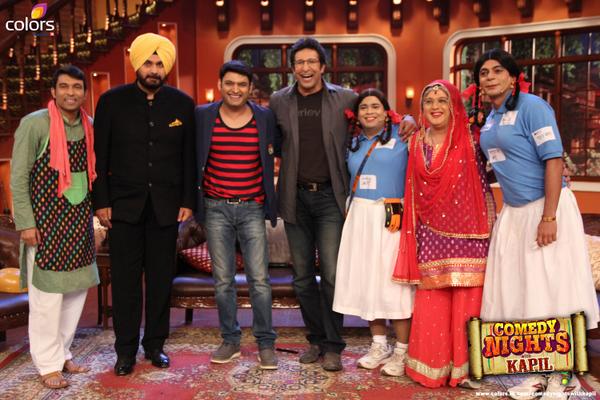 Kapil welcomes all and asks Siddhu that he has played Cricket for so many years and according to him who are the bowlers which used to give him troubles in his batting ?

Siddhu replies Malcolm Marshall, Richard Hadlee, Imran Khan, Kapil Dev, Wasim Akram. Kapil welcomes former Pakistani Cricketer, Commentator, and Cricket expert – Wasim Akram. Wasim speaks of being friend with Siddhu on and off the field since they have retired almost 10 to 15 years ago. Siddhu speaks of not able to see some deliveries of Wasim’s fast bowling. Siddhu speaks of having a good laugh when Inzamam Ul Haq’s runout with Wasim Akram and wants Wasim to share that anectodal experience. Wasim speaks that Inzamam was a big player and also captained Pakistan and also his friend.  He speaks of the time when the match was played at Sharjah and it was hot weater and Inzamam was playing on 90’s and there were 2 deliveries left. Wasim suggested to Inzamam to take a run in one of the remaining deliveries and West Indies bowler Ambrose was bowling. Ambrose bowled a yorker at Inzamam who fell on the ground after receiving at his foot. Wasim started running and reached close to Inzamam’s crease and he called Inzamam fondly as Inzy. Inzamam replied to Wasim, How come you are there ? Siddhu and all got a laughter on that note.

Kapil starts to speak with Wasim more and suggests that Bollywood and Cricket always had a relation. He speaks of naming Bollywood stars and asks Wasim to place them in different positions in a cricket field. Kapil asks about fine leg. Wasim replies Deepika since she has fine legs. Kapil then asks about gully. Wasim ponders a bit and replies Emraan Hashmi. The next question is about cover position. Wasim replies Mallika Sherawat is suitable for cover position. Kapil asks about extra cover and Wasim replies Sunny Leone. Raju comes sitting on a small horse replica and informs that Bittu’s wife came on a small wooden cover (tokri). Bittu makes a taunt at Raju. Raju wants to join Wasim’s team and offers two benefits – prepare Rotis and also play cricket. Bittu makes a taunt at Raju’s face and asks how come he can think of playing cricket ? Raju wants to hear from Bittu who is his job on how does his face looks ? Raju asks whether his face looks like Deer’s tail. Bittu speaks that Raju has diversity in expressions and his face becomes one according to the things he sees. Raju makes a taunt at Bittu whether he becomes Big Boss after seeing the show. Bittu goes on to make more taunts referring Raju’s face as Taxi meter after seeing taxi and others. Raju wants one chance from Wasim and will make sure to win the world cup. Bittu makes another taunt at Raju calling his face to that of a plate. Raju becomes sad and goes with his horse replica.

Kapil goes on to his Q&A fun chat with Wasim and asks who is the player most distracted by girls ? Wasim calls himself to be that person. He speaks of fights between players to decide who will stand on the fine leg and close to boundary. After getting the nearest spot to boundary, he used to exchange some signals towards female fans regarding post-match meeting. He was referring to the time playing in Australia and New Zealand. Kapil, Siddhu and others get laughter to know Wasim’s mischievous revelation. Wasim shares another anectodal experience with Inzamam going back to Delhi test match with packed house. People in the stadium called Inzamam as Aloo and Wasim tried to calm him down and Inzamam asks Wasim what-if people around 50,000 called him Aloo, how would he feel and will not get angry ?

Daadi will come on stage and give a dance performance with Wasim and will be in her usual style and Itta Sa Tha moment. On other hand, Palak and Gutthi will be displaying their interesting cricket techniques to Wasim and display their cricket talent.

Wasim speaks of growing up after watching movies of Sr Bachchan like Sholay and then asks Kapil who does he admire in Pakistan. Kapil speaks of liking Nusrat Fateh Ali Khan, Ghulam Ali, Arif Lohar, Sajjad and many. Kapil then decides to sing a sufi song from Nusrat Ali and sings Thare Bina Laga Nahi….Piya Re… song. Wasim signs a bat with his greeting message for Kapil which gives him much excitement and the show ends with Maara Re song from the movie Ferrari Ki Sawaari. Stay tuned to Comedy Nights on Colors @ 10 PM.