Show’s Theme: Everybody has their individual EVEREST in Life which they try to conquer.

Few examples: a young boy wishes to play Cricket and represent India at the national level; a Cancer patient wants to defeat the illness and overcome it to have healthy life once again; a maid aspiring to send her daughter to a private international school; To be perfect in doing things; achieving every day with positive results, and many more. Whats Your Everest is a metaphor to highlight one’s biggest ambitions/dreams.

Anjali Singh Rawat is a young 21 year old girl who just completed her graduation in English Literature and have passed with flying colors – topper in Rajasthan state. Anjali’s father Jagat Singh Rawat works as a Brigadier in the Army and her mother Sarita Singh Rawat is a housewife and they live and stay in Jodhpur. She was happy on her graduation day ceremony and makes a request to her father who most of the times doesn’t speak to her in a friendly way. When she makes a request for him to attend her graduation day ceremony, he decides to not attend and have his own reasons for it. He opens up and informs those reasons to his wife Sarita and Anjali overhears their conversation. Brigadier Jagat Singh Rawat speaks of not being able to love his daughter Anjali since destiny played against him and he didn’t have a son. He puts blame on his destiny and also on his wife’s inability since she grew complications in her first pregnancy which meant she cannot give birth again in her life. He thinks that if his son would have joined Army like him if present and thinks that Anjali can never take the spot like that of his son. He speaks of his pain and not able to fulfill his dreams and wishes (Armaan) because of Anjali.  And goes on to extent of calling her as his helplessness, punishment. Anjali cries on hearing such revelation (negative) from her father and understands the reasons about his hatred towards her.

In this situation, Anjali’s mother Sarita provides support and solace to her and tries to suggests that her father loves her and doesn’t not hate. Anjali counters that argument by saying that her father doesn’t love her and even never wanted a daughter as well and has herself heard all his conversation. She also cites on not having any photo with her father right from childhood days. She feels the loss of father’s love and goes through her childhood photos. She cancels her graduation ceremony and haven’t gone to receive the Best Student Award and thus her friend Maithili receives the trophy on her behalf and brings it to Anjali’s home. Anjali who was in despair breaks the trophy and makes announcement that the trophy was supposed to be received by his brother (if she have one). She speaks of having no control on the already broken trophy pieces but have control in combining her broken dreams to realize her first and last wish which is to win her father’s love. Anjali was feeling completely neglected by her father gets transitioned into a girl with much confidence overnight. She have seen different emotions in short time span – happiness (best student award news), dejection, hate and feeling neglected (after knowing about her father’s rationale), and vibrant confidence (pursuing to win her father’s love and to do more than what a son could have done).

Anjali begins her trail on winning her father’s love and her first test of courage is underway when a young man on the road harasses Maithili by touching her in an unwarranted manner. Anjali is defiant to catch that man so as to teach him a lesson for his harassment activity. Anjali will be standing up and proving her courage at the time when needed. Post that incident and after a while, Anjali decides to summit the Mt. Everest and wants to engrave her father’s name after reaching the summit and moreover to accomplish it as his daughter and not someone’s wife. She starts her mountaineering efforts towards Everest after a period of 3 months and begins her trail. During the course, she finds a valley to be crossed to reach another ice-sheet mountain and finds a dead body of a mountaineer. She makes an attempt to use an existing descending ladder there to cross the mountain but the ladder looses its grip on ice and she looses her control midway and is about to fall inside a Crevasse – deep crack in an ice sheet/glacier. How would she manage to save herself from that dangerous and risky fall ? Whether she will get help there ?

Aakash Joshi is a young videographer/Journalist based in Mumbai and has lost a dear friend Gaurav when they went together to shoot Kidnapping case. After a brief fight with the Kidnapper at an under construction multi-storied building, Gaurav accidentally falls from the building after engaging in a fight with the kidnapper and dies. Aakash tries hard to save Gaurav but he himself gets injured with iron rods lying there piercing his leg and thus couldn’t manage to hold Gaurav’s hand for long. Gaurav’s death has given Aakash a big setback in his work as well and develops Vertigo problem (Vestibular system dysfunction) because of which he gets thoughts about losing Gaurav during sleep as well. Aakash meets Gaurav’s mother Shikha Maa often and she motivates him to pursue his career and look ahead in life instead of worrying and lamenting about the loss. Aakash goes for the interview for an interesting assignment to meet Ramesh Roongta (ruthless & focussed owner of Century Corps). Aakash gets a vertigo attack when he was going in the lift and remembers losing Gaurav. He meets Ramesh Roongta at his office on the 15th floor. Ramesh speaks about his plan of organizing Mount Interest Summit Expedition and informs Aakash that Arjun Sabharwal – celebrated mountaineer who has already made summits on many mountain peaks (8 out of 14) will carry on the expedition and wants him to record it in his camera so that they can either make a documentary or possible telecast on a channel. Ramesh thinks his plan of mountaineering expedition to Everest has all the ingredients and can be runaway success. He also speaks of knowing well that Aakash has covered numerous difficult incidents with much ease – riots, protests and so forth and thus finds him the perfect man to cover the expedition sponsored by his organization Century Corps.

Aakash learns that he need to climb Mt. Everest as well to record and shoot for a period of 4 months assignment and becomes wary to accept the offer since he is well aware of his vertigo problem and is scared (fear) of heights. Aakash informs Ramesh on taking few days to give a final reply to his offer which makes him puzzled since he learnt from Aakash’s former boss Alok Tiwari that he is available and free since some months. Aakash after some pondering decides to accept Ramesh’s offer to cover Mt. Everest expedition and informs the same to Shika Maa. Does he overcome his vertigo problem to accept that offer and inspired by Gaurav ? Will Shika Maa happily give her approval to Aakash ? 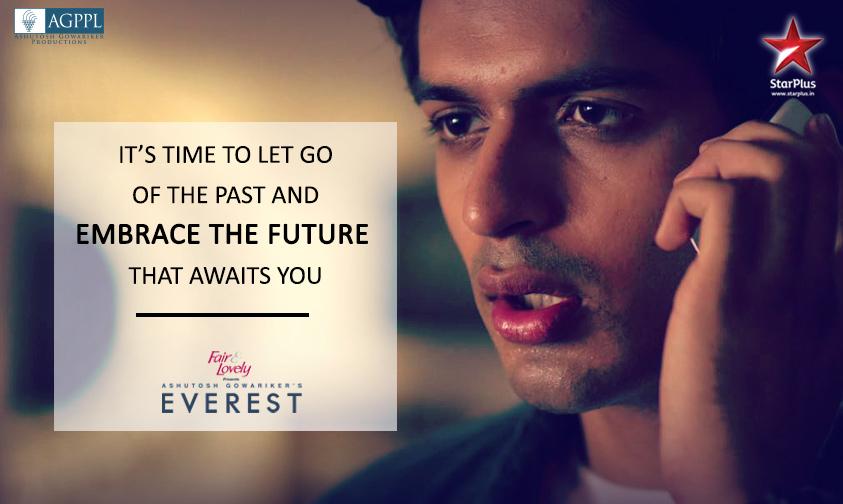 EVEREST offers intertwined emotions, courage, loss, yearning for love and acceptance, achieving dreams and most importantly celebrates life in its full essence. Everest is telecast on Star Plus @ 10 PM IST from Monday to Saturday and have taken the slot of Pyaar Ka Dard Hai which ended last Saturday.

@TellyReviews1 @StarPlus @AnjaliSRawat is todays girl, a go getter ,a fighter. She knows what she wants and works for it #EVERESTLiveChat

@TellyReviews1 @StarPlus #EverestLiveChat – thanks.it was difficult location location wise and east coz team has made it easy

@TellyReviews1 @StarPlus he is a rockstar with a heart of gold,a guy with a lot of layers!it's a dream debut,learnt so much #EVERESTlivechat

* Rajat Kapoor as Ramesh Roongta (ruthless and focussed owner of Century Corps)
– Roongta’s thinking: The fear of losing makes you succeed in your mission, and informs the same to Aakash during expedition agreement finalization.
– Rajat’s Twitter page

* Suhasini Mulay as Shikha Maa (Gaurav’s mother) and like mother for Aakash.
– Suhansini ji is a veteran actress working in Bollywood, Marathi films as well on Television.
– Read more at her Wikipedia page

* Milind Gunaji
– Portraying the role of Col. Abhiyankar. Head of N.I.M and leader of Everest Expedition

* Mohan Kapur
– Actor and theatre personality. Portraying the role of Weather man of Everest Expedition. Marks his entry at Everest base camp
– Twitter page of Mohan