Anjali has shown first signs of courage after getting a eve-teaser arrested. Sooner, Anjali learns about arranged marriage proposal for her. Sarita informs that the boy is Vidhaan, the son of her father’s friend Brigadier Vikram Bhardawaj.

Vidhaan works in the Army. Anjali’s and Vidhaan’s family used to stay in Jhansi until she was 10 years old and she have fond memories. Anjali meets Vidhaan and his parents at her home after overcoming initial disapproval to meet and got words of advice from her friend Maithili. Vidhaan learns that she used to play basketball during her childhood and he likes the sport as well and pulls her leg on it. Vidhaan is scheduled to go to Siachen border in 1 month time and going to be stationed there for almost 2 years. For this reason, Vidhaan’s mother wants him to get married with Anjali before travel to Siachen in one month time. Anjali learns about it and doesn’t want to get married so quickly and informs her mother Sarita.

Vikram shares an important facet of his life and reminds on how Jagat aka Jags/Rocky have saved his life in Kargil war. In saving Vikram’s life, Jagat Singh has made a big sacrifice in not caring for his injured leg during the war. The consequence of such sacrifice is Jagat Singh now cannot climb mountains. Jagat Singh used to love mountains and have expedited to Nanda Devi track just an year ago before the start of Kargil war. He was awarded Veer Chakra medal but on the down side he has lost all hopes of summiting Mt. Everest which was his dream. At this juncture, he opens up and suggests that if he had a son then he would have summit Mt. Everest. He further adds that dreams does not deserve attachment as they are meant to be shattered. Anjali listens to his father’s open desire on why and what he expects from a son and how he values only son. Her morale gets another hit though her father has always been her hero. Anjali has shown sparks of true grit – Eve-teaser beat-up is one such example. She makes her mind to fulfill exactly what her father’s wanted from a son – summit the Mt. Everest. She decides to go ahead in summitting the Mt. Everest and start her mountaineering trail to win her father’s love and gain his acceptance. 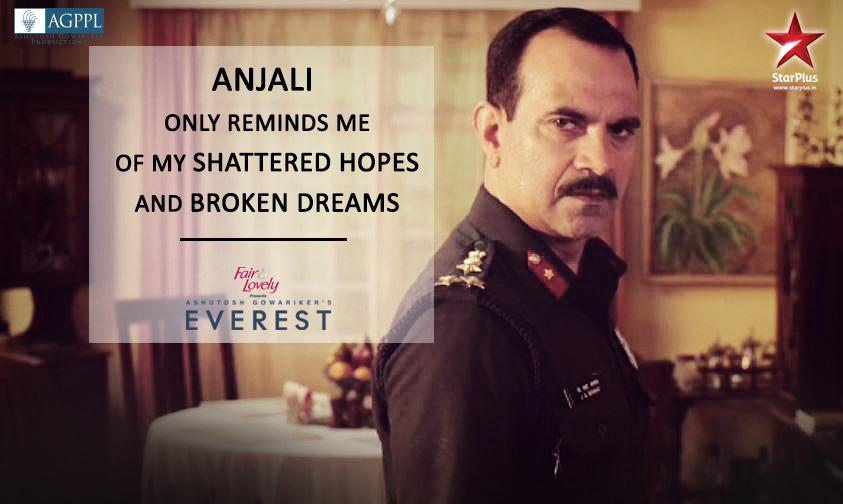 Earlier, Aakash decides to accept Ramesh Roongta’s offer to scale Mt. Everest and informs Shikha Maa about his decision and convince her though she is much concerned about his vertigo health problem. Aakash is taking medication from a Psychiatrist and is fine since 8 months. Aakash accepted the offer since he has to repay 10 lakh loan to the bank within 6 months. Ramesh Roongta agreed to pay 10 lakh INR in advance to him once he signs the Mission Everest contract. Aakash is going to visit Psychiatrist to inform about his expedition and makes a point there that he has to go at any cost. Arjun Sabhrawal – celebrated mountaineer does a photo shoot before his first meetup with Aakash who will capture his expedition on camera for documentary. Aakash motivates Arjun in their meeting and gives him the title Arjun – the mountain man. Arjun and Aakash will now meet next time at the NIM (Nehru Institute of mountaineering ) site in Uttarkashi for training. Ramesh clearly states to Arjun to not reveal anything to Aakash about their real motive. Ramesh wants Arjun to succeed in Mt. Everest expedition even if Aakash couldn’t make it and cites there is no option to fail. Arjun is following Ramesh’s instructions which is he should follow scripted approach in answering media Q&A’s at the upcoming press conference.

What would be the reaction of Anjali’s father Jagat Singh and Vidhaan’s parents about her decision ? Will Vidhaan be able to stand by Anjali in such a situation ? How Anjali’s first head-start in her Everest expedition materialize ? Coming to Arjun’s development, it would not be easy for him to take media trolleys in Q&A’s as always something unexpected crops up from them. The media is interested to know Arjun’s background – about his parents. Will Arjun be able to answer such questions ? Will he be vulnerable in revealing a piece of his real motive engineered by Ramesh ?. All the actors are effortlessly portraying their roles to a layered story, Hats off to them and the Everest team. Keep Reading..