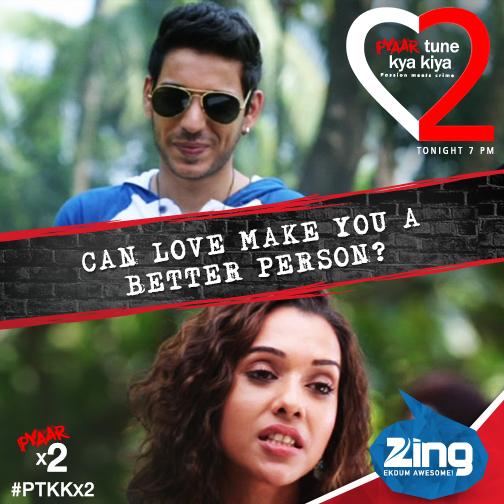 Meiyang Chang (the host) speaks about having hobbies changed within ourselves sometimes because of our partner. He speaks about today’s story is set in Ludhiana and is about Sonam and Chanpreet aka Champu, Champ. Their love story began with a fight but have changed into love later.

The story starts with Chanpreet seen in the jail and being told to wear a Sherwani in the lock-up by his Beeji (Daadi, grandmother). He forcibly wears the clothes making Daadi happy. The jail constables speak that some months ago Champu had done a big thing. The story goes back by 8 months and shows Chanpreet aka Champu engaging in a motor bike race and wins it and gets applaud. The police gets hold of Champu and arrests him since he was over speeding in the night. Champu’s father gets hurt after listening about the news and also get hit by his son because of some mistake. Champu, and his family are seen at their home and Daadi informs that Champu’s mother died some years ago. He apologizes to his father for the punch and his Daadi wants him to stop the race and suggests that he should go to Ashram with her. She makes a firm thing that he has to come with her. He reminds that his mother died on the way to the Ashram in an accident. She finally convinces him and goes with his Daadi to the Ashram next morning. He gets introduced there and helps her Daadi though he finds the kitchen work boring and speaks of liking speed. Just then, Sonam comes there and her aunt says that she has rejected 3 boys and 2 boys have rejected her. Sonam is an orphan and Champu looks at her and smiles. Daadi asks Sonam why she is so sad ? Sonam speaks of her aunt’s contribution in taking care of her otherwise she would have stayed in Ashram. She wants to marry the one which her aunt says so. Daadi wants Sonam to listen to her heart instead of mind. Champu was speaking on phone with a friend and Sonam comes there and starts arguing that he is creating noise. She asks him to go to some bus office stand. Both begin to fight more and after some strong words she leaves.

Meiyang speaks that Sonam was a pious girl and Champu was carefree and taking things for granted. He was only concerned about bikes and fights were bound to happen between them.

Sonam’s aunt asks her to not mingle with Champu. Sonam was seeing pouring water over him. She is being told that Champu just roams around and need to stay far from him. She is preparing food at her stall in the proximity of the Ashram and Champu goes there to mix salt in place of Sugar and wants to teach a lesson to Sonam. Sonam offers the food to all Ashram people and they vomit after eating it. Sonam was sitting idle after that incident and he goes to meet her. She opens up and speaks of making Besan Ke Laddoo since her mother’s dead anniversary was that day. He then asks about how her mother passed away ? She replies accident. He asks whether she knows Karate and pulls her leg. She speaks of not liking anything and wants to be alone. He begins to say sorry to her. Sonam and Champu meet later next day in the evening and he brings Besan Laddoos for her. She smiles after eating it and he speaks of girls getting attached to things fast. She reminds about manners and says that his tongue is very loose. He speaks of being normal and she replies in Tapoori language and asks him whether she speak in that manner as well. Both begin to talk and inches to have a good time. She speaks of feeling nice to stay with elders in the Ashram and her loneliness void was filled by the people and the warmth she receives here. She speaks of living for others and only then you will know the value of life and also you will know the direction in life. He speaks of losing his mother when he was 12 yrs old and now his father with him. He speaks of liking for bikes and she speaks of not liking bikes and speeds.

She thinks they are different and also similar in some way and wants to learn bikes if someone teaches her. He decides to teach her bike riding but there is one condition – she has to forgive him and also they should be friends. Champu begins to teach Sonam bike riding with all care and precautions. [Khali Salam Dua song plays]. Both begin to come close and starts to enjoy time together. Sooner then, Champu is being taken by his Daadi in the night from the Ashram and she thinks he is having good time in the Ashram. Sonam’s aunt finds her hugging Champu just outside her home. She informs her husband about Sonam’s mingling and going around with a boy who is a spoilt. But her husband shrugs off and says he will talk with Sonam. Champu is being pressurized to participate in the race by some racing boys – Ronnie and others. Sonam asks why he joined their group ? He replies on defeating Ronnie always and thus Ronnie always tries to put and incite new challenges. Champu doesn’t want to have fear but she thinks that race bike riding is risky. She thinks that he is not serious about life and he speaks of being a good rider and doesn’t want her to be scared. She wants to go with him and he speaks of not risking herself since she is also scared of speed as well.

Sonam tries to join him as a pillon rider in the race. He calls her as his girlfriend and she accepts it and finds that reason to be with him together in the race. He agrees to take her in the race after learning that she never ventured out in the night before because of his uncle. Next day, Champu participates in the race during the night with Sonam as the pillon rider and after some distance they hit some people on the road and severely injuring a couple. They are also bit injured and she blames him for being calling himself a bike racer and speaks how he has ran away after hitting some people. She speaks that he should feel shame instead of speaking of running away. She gives him advice that they need to surrender to the police. He speaks of father’s knowing him and also worries about media. She asks now he is thinking about family. She reminds him about true love and doesn’t have the problem to deal with truth. She tries to give him confidence and consolidation and says that they will deal with their mistake and convinces him to go to the police for surrender.

Meiyang (the host) speaks that Sonam didn’t like bike racing but she gave support to Champu in participating in the race against Ronnie. After the accident, Sonam gave him strength and he accepted in court that the accident happened because of him and accepts his mistake. Sonam’s aunt and uncle also learn that their niece was also involved in the accident.

Sonam tries to suggest to her aunt and uncle that Champu’s accident was not intentional. Sonam’s uncle speaks that Champu’s race have led to the murder of people and informs how Champu participated in the race with his loafer friends. At Champu’s end, he is meeting the lawyer with his family. The lawyer informs his father that since Champu has admitted in court, his punishment will be less but still it would be for 3 to 5 yrs. He informs that the other party who were the victims of that accident wants to put a drunk and driving case against Champu and suggested that he drove the bike under the influence of alcohol. Champu’s father speaks that his son never drank alcohol and then the lawyer informs that if Sonam comes in the court and says that Champu didn’t drank alcohol only then other charges will not filed against him. Champu doesn’t want to maker Sonam as witness since she and her family have already suffered. Champu is being told by his Daadi that she will bring Sonam since she is courageous girl. Sonam tries to speak with her aunt that in such incidents only one-sided things are shown and even the driver also gets hurt. Sonam see the news which says that the bike racer have taken drugs/alcohol and have attacked a young couple in the accident. The accident victims have a bleak chance of survival as they are in coma. Champu’s Daadi comes to Sonam’s house and wants her Aunt to allow Sonam as the witness in the court which will lower the punishment for his grand son.

Champu’s Daadi speaks of her helplessness since she was unable to convince Sonam’s aunt. The lawyer informs that Sonam has to come by 2 PM only then it will help Champu. Champu doesn’t blame Sonam and believes that her family is stopping her. Some 5 mins to 2 PM, Sonam reaches the lawyer’s office and signs as the witness. Champu asks how come she came there and she informs on keeping her Aunt locked in the room to run away to reach that place. Sonam’s aunt and uncle finds their nice on TV. Sonam speaks that she stood for the truth and thinks that their aunt/uncle will forgive her. The story comes back to present and Champu after serving the punishment comes out of jail. He speaks of learning a lot in the 14 months during his jail term and doesn’t want to participate in the race anymore and the story ends with Champu and Sonam prepares to get married.

Meiyang speaks that sometimes we walk on wrong path and we don’t have any idea where we end up and Champ was also going through the same. He found Sonam, and befriended her first and then fell in love. She became his Humsafar (partner) and Champ was jailed but she was his strength. He got new lease of life and mind because of her. Meiyang asks viewers what they would have done if they were in place of Champu and Sonam ? The people can share their feedback using the hashtag #PTKK on Zing TV’s facebook and Twitter page.