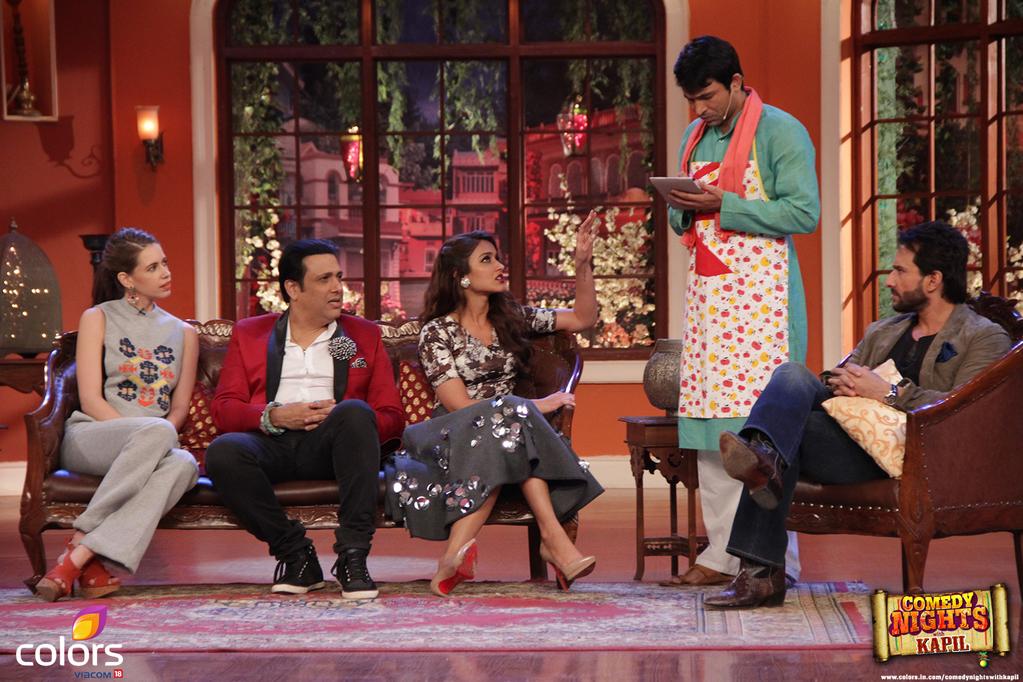 Kapil starts the proceedings and speaks that since start was good therefore there should be a happy ending as well, the curtains are down and he leaves. Siddhu comes on stage and Saif comes there as well and Siddhu informs that the game is over and has earned the money and then leaves. Saif is puzzled why Kapil, Siddhu are leaving and then Govinda makes an entry there to find musicians are also not not on set. Ileana and Kalki comes next and Govinda suggests that the show has ended and let’s go. He makes fun of Bittu’s family and the shortage of food. Sooner, the curtains are up and Kapil comes on stage and also Siddhu to end some suspense created earlier. Kapil welcomes the them and  starts speaking. He asks Ileana that she is doing the role of a writer and wants to know more. She replies yes and had to look sexy in her movie and on a lighter note haven’t wore full clothes as well. She says on the need to do something when sexy actors like Govinda are in the film industry. Kapil wants Govinda to develop a romantic dialogue from one of his earlier dialogues. Govinda wonders how to convert Hata Sawan ki Ghata. batti bujha ke so ja intukle, pintukle  dialogue (phrase normally spoken when someone acts in over smart fashion – Tapori style ) in romantic way ? He begins to enact the dialogue with Ileana in romantic way and in the end of it hugs her.

Audience Interaction with Happy Ending Team
Kapil opens the floor to the audience and a young boy wants Ileana to impress him and suggests always the audience wants to impress the celebrities. Ileana accepts his request and walks to him and says no need to ask the why to the boy. She asks about his name and he replies Dharmik. She asks about its shorter version and gets DK in answer [DK is also the nick name of the co-director of Ileana’s movie]. She showers a kiss on his cheeks and in return he kisses on her hand. Siddhu humorously suggests that Dharmik will not clean his face for next 2 months and Kapil speaks that its better to be in the audience instead of making shows invoking a laughter. A senior woman comes on stage and Kapil wants to enact a Saas-Bahu scene there (mother-in law vs. daughter-in law). Kapil himself acts as the mother-in law (Saas), Saif as her daughter-in law (Bahu jr), senior audience woman (Saas’ friend) and another audience woman as elder daughter-in law (Bahu Sr). Kapil as Saas asks to Saif (Bahu jr) why she is not listening to Bahu Sr. Saas’ friend speaks that Bahu jr doesn’t do work properly and Saif (Bahu Jr) while wearing a Dupatta makes taunting face at Bahu Sr and makes a taunt in suggesting that she even cannot take out the milk from the goat. Saif have also tried his luck to take out the milk from goat after giving the feed (chaara) to the goat.

Raju comes there and meets the guest and asks them on what food they like to eat at Bittu’s home and tries to take the order on a writing pad. Ileana and Kalki thinks that they will be getting food and speaks to Raju. Raju later also takes some music lessons from Saif in particular about how to play a guitar. Daadi comes on stage and is seen wearing a floral and trendy dress and wants to impress Govinda who is also well dressed in a matching red color suit. She will be in her usual self and as always Bittu will first listen to her. Daadi goes in drunken mode and goes to sit beside Saif. Gutthi comes there while wearing the costume of a Donkey and asks Daadi on why she left her at the party alone with other drunk people. Gutthi speaks of saving herself from there with much difficulty. Daadi in drunken voice replies that she has left Gutthi at the party with drunk people and not with fools. Gutthi speaks that some people have really harassed her there and then discloses that actually they were donkeys who don’t know to impress her. Daadi wants to give a demo for a party there and Gutthi speaks of a parcel (sofa pillow) which needs to be passed from one to another with music. When the music stops, the person holding the parcel has to accept and work on a task. Kalki becomes the first person to do a task and she speaks of learning from someone on how to do it. Siddhu and Saif wants Gutthi to teach Kalki about the task which makes her blush. Gutthi goes on to show some dance moves to Kalki who watches patiently and dances on Main Hoon Deewana… Agar Court Kacheri song and uses her hands like folding and Kalki follows her steps and both grooves well.

Laccha is seen in a new avatar and dons a modern look instead of rural dairy farm owner look. He is seen as a music enthusiast and composer on the lines of Pritam (Bollywood musician) and western musician  and wears specs, long-sleeve black coat and have beard. He is happy to hug some of the fan girls there. Laccha aka musician wears Union Jack T-shirt and then goes on to give few tips on how to play Guitar to Saif who then follows by trying his hand in playing Guitar. Laccha will be having some fun moments with Saif. The show ends with Kapil signing off and asking the people to keep smiling, have laugh and watching Comedy Nights.

Additional Note:
– Happy Ending movie is about a writer Yudi (played by Saif) who meets a movie star Armaan whose stardom is dwindling played by Govinda. Yudi is being approached by Armaan to write a movie for him. Illeana plays the role of writer. Kalki Koechlin and Ranvir Shorey also play important roles in the film. The movie’s Wikipedia page and its scheduled to release on 21st November.
– Union Jack is a trance music band (trance, is an electronic dance music originated in Germany) with collaboration between Simon Berry (Musician) and Claudio Giussani (trance music producer) from England. Union Jack band’s Wikipedia page.
– Twitter pages of Kalki, Ileana