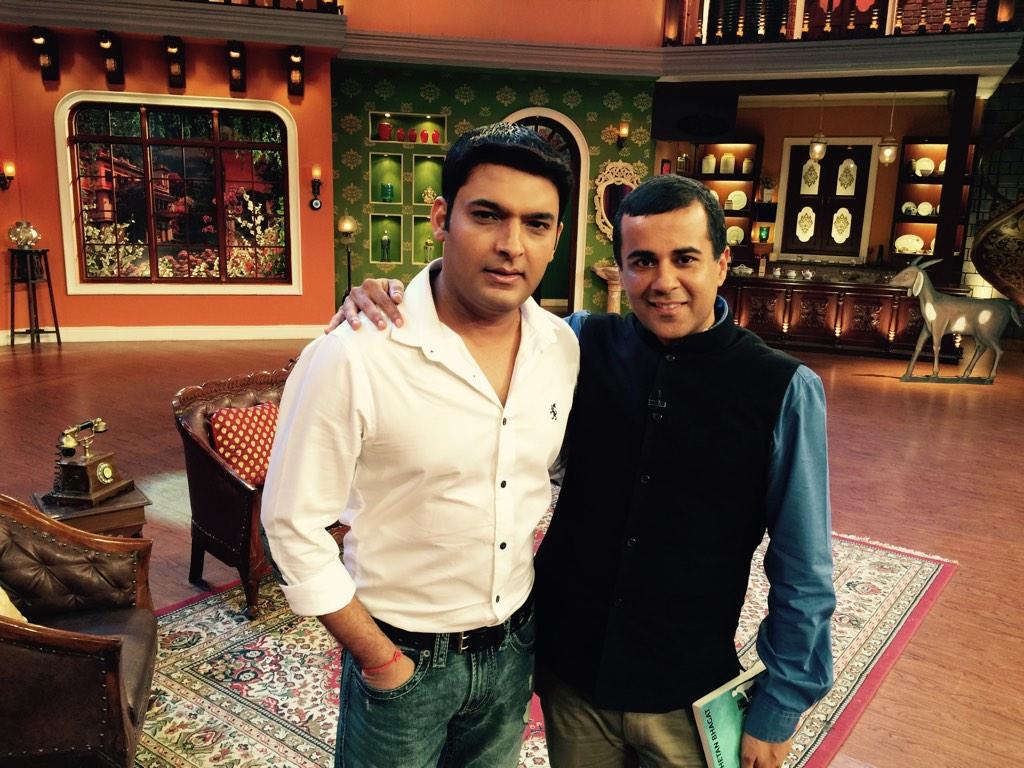 Bittu’s interaction with Electricity, Water, and Gas Supply Man & Finding Petrol
Kapil welcomes all and speaks that today’s people are living on bills since we have so many kind of bills – water, electricity, gas, phone. He adds that when you give the bill to others it looks fine but when you receive a bill then it directly goes to hit your heart (Dil) invoking laughter. Kapil makes a joke on his guitarist – Dinesh who drank so much tap water that his face became like a tap. A man in a white shirt comes on the stage and starts to ask for Bittu Sharma. Bittu makes a taunt at him and learns that he is Electricity supply (Elec) man.  He tries to make more taunts at Elec man and asks why he came in the world and who told him to come. He replies by showing the big scissor and speaks of coming there to cut the electricity at Bittu’s home. Bittu asks about the reason and he replies that Bittu haven’t paid the electricity bill since 3 months. Sooner then, two men come on stage in a safari suit and asks the Elec man why he is so harsh and threatening Bittu and refers Bittu as innocent and nice fellow. The men are from water supply  and gas supply dept. The Water man suggests that Bittu might had some compulsions thus he couldn’t pay the bills. Bittu compliments the Water Man and thinks he is showing humanity and soon learns about their identities coming from water and gas supplies.

The Water man informs Bittu that though he didn’t paid the water bill since 6 months they didn’t take any action against him. Bittu agrees with his argument. The Gas company man informs Bittu that he got gas supply to his home and since 4 months no bill was paid but still the connection was alive. By taking into account Bittu’s behavior in not paying bills, they have disconnected Bittu’s home water and gas supply from outside with much innocence. Bittu asks whether such thing is true and carries nervousness and worry on his face. The electricity supply man informs Bittu that earlier he thought to give him one day grace period but now will give him only 1 hour. Bittu tries to counter him but he makes it clear that the power wil be cut. All the men leave and Bittu says always the problems come in group and shows his displeasure. Sooner then, Daadi comes with a small water vessel and informs Bittu that water is not coming in the bathroom. If you open the tap only the air is coming out invoking laughter. Bua comes there and informs Bittu that Raju has said since morning gas is not coming and even she has called the gas man. Bittu replies that the gas supply man came but instead of gas he just gave an answer and left. Also, the electricity supply will be cut soon. Daadi gives her advice to Bittu and says that he should pay the electricity bill and can forget about water and gas bill. Bittu speaks of not having any money and Daadi scolds him and then asks Bua to find the money which she has saved. Bua takes out some money from her pocket and Daadi gives them to Bittu. Bittu thinks the money is too small which is just to buy some tablets for digestion and not to pay bills. He suggests that he has to add more money to pay the bill and calls Raju.

Bittu gives Raju the money for electricity bill and asks him to pay the electricity supply man who will be standing outside and this will make sure that their electricity will not get disconnected. Raju is also being told to call a plumber. A plumber comes and gives the reference of Raju for coming there. He asks Bittu where to place the motor and the tap. Bittu tells him about the location and the plumber goes on to fit a motor and tap. The tap is functional with water flow and asks Bittu 1200 INR for his services. Bittu makes a taunt at the man by saying whether he has helped him in preparations for a govt job for that money so as to indicate 1200 is too much for fitting tap. Daadi comes in and informs the plumber that Raju will pay him the money since he was the one who called him as well. The plumber leaves from there and Bittu wants to check how the tap fitting is done. He drinks the water from the tap and spits the next moment and says that it smells like petrol. Daadi checks it and informs Bittu that it doesn’t smell like petrol since actually it is petrol. Bittu validates Daadi’s claim by igniting the glass which was filled with liquid and gets fire flame and confirms it to be petrol. Bua wonders on how to get water in their home and on other hand Bittu is happy to find petrol at their home and plans to sell it to make lots of money. He humorously says that Bua can have many marriages and even take bath with mineral water. Bua, Daadi, and Bittu are all happy in the end.

Chetan Bhagat’s entry and his interview with Bittu’s family & neighbors (Laccha, Gutthi) for magazine
Kapil comes and speaks of being in tension since the guest coming on his show for the interview writes book in english. But there is no problem and the ones who don’t read his book can watch the movies which are based on his books. Kapil then welcomes Chetan Bhagat and calls him a talented writer. Chetan Bhagat comes and is greeted by Kapil. He informs last week the Nobel Prize winner for literature was announced and clarifies that he was not nominated.  But he is more happy to come on Comedy Nights than the one if he would have got on winning the Nobel prize nomination. Kapil speaks to Chetan’s wife Anusha Bhagat and asks her what she found interesting in Chetan. She speaks on meeting Chetan at IIM Ahmedabad and she used to have lot of work on her studies and Chetan was the only one who used to make her smile a lot. Chetan suggests to Kapil on a lighter note that if he had gone to IIM Ahmedabad then the movie would have been made on him. Laccha makes his entry and greets Chetan. He speaks of preparing his novel and once its completed wants it inaguration from Chetan’s hand and requests the same. Chetan agrees to do it and Bittu wants Chetan to first check what it is actually written by Laccha. Laccha then speaks of coming with few lines from his unfinished novel. He starts speaking with the context on his buffalo – You have lifted the tail and smile.. Got rid of itching with your horns.. After seeing your beautiful gestures, I couldn’t sleep in the night. I have gifted you grass and you have eaten it with Love [Bittu comes in and suggests that Laccha and the buffalo have eaten equal amounts of grass]. Laccha speaks more lines – With the smell of Gobar, you have brought smile in my life. Chetan goes to sit on the ground after having many laughs and touches Laccha’s leg with admiration for his phrases. Laccha wants to go after his poetic phrases and Bittu makes a taunt at him asking him to go carefully without passing out any air. Laccha like always will try to outsmart Bittu and their tussle continues.

Gutthi will also be in her spirits [Aap Aaye.. Is Bagiya Mein.. Gulshan Gulshan] with Chetan on the show and will also listen patiently to him and act like a knowledgeable person (Gyaani). Chetan is also present to enjoy comedy while also talk on motivation. Later, Kapil opens the floor to the audience and a young girl speaks of her interest to see Chetan dance with his wife Anusha on 2 states song and this will be different since normally the actors are seen dancing. Anusha comes and dances with her husband on the song Locha-E-Ulfat (Problem of Love) from 2 States movie. Chetan and his wife show some dance moves with their hands and soon ends it. Kapil signs off by saying viewers to keep smiling and watching his show.