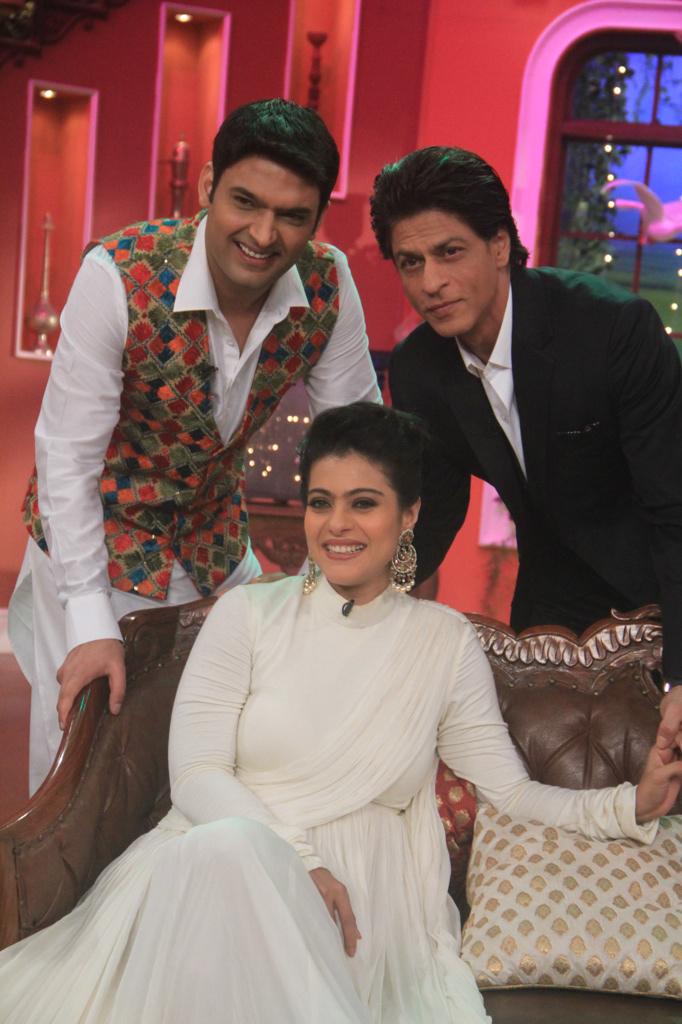 Guest on the show: Actor and Stars – Shah Rukh Khan and Kajol; Eternal Raj and Simran of DDLJ

Kapil welcomes all and speaks about movies being watched all over the world and in India there are more than 1000 movies being released in different languages every year . Under this setting, a special mention goes to a movie which ran well for more than 1000 weeks. Kapil suggests that this movie is eternal and what you will say to an actor of that movie is is Badshah. He then invites SRK by referring him as the Badshah of Bollywood, King Khan on stage. SRK comes and greets Kapil with a hug while the audience stands up and chants SRK’s name. He speaks with SRK that when Karan Johar came on his show spoke that SRK is the only one actor who has kept the chemistry intact from leading actresses Kajol to Deepika. SRK replies that what Karan said is right and on a lighter tone suggests that people think he is having a very good chemistry with Karan bringing laughter. Kapil congratulates SRK for DDLJ’s great and successful run and then dvelves into asking SRK in how he signs Yash Raj films. He asks SRK that he doesn’t read the script before signing a YRF film. SRK provides his rationale for it and starts speaking about late Yash ji (Yash Chopra) and how he used to read the script very fast and used to mix punjabi and hindi during his talk. SRK enacts how Yash ji spoke to him for the first time when enacting a romantic scene. It sounded very unclear to SRK but he got the essence very well. He was going to do DDLJ and actress Madhuri Dixit was being called and Yash ji spoke about romance, passion, Jhappi’s (hugs) all at one time to them and SRK enacted those expressions on Kapil’s show which brought laughter. SRK informs Kapil that according to Pam Aunty (Yash Ji’s wife), Uday, Adi [sons] he was the only one who used to understand Yash ji.  SRK shares an anecdote on how Madhuri got teary eyed after 2 ½ hrs narration from Yash ji,  and 2 days later he met her in Filmistaan studio as they were shooting for the movie Koyla. She then asks SRK on the story which Yash ji was narrating to them since she couldn’t understood earlier. SRK speaks from that day onwards he agreed with Yash ji on the script and movie just on phone without going through the narration.

Kapil then invites actress Kajol who portrayed the role of Simran in DDLJ. He informs that Kajol has made an impact on all and everyone got used to the violin which she played in the movie [During the song Ruk Ja O Dil Deewane..]. Kapil goes to take her but soon finds Kajol is already sitting beside SRK on the sofa. Kapil wonders and asks SRK how such thing have happened ? SRK speaks the dialogue – Bade Bade Shaher Mein Choti Choti Baatein Hoti Hai..[In big cities, there can be some trivial things happening]. Kapil adds that its not a small thing since SRK and Kajol are seen together in one frame. He then informs that Kajol is carrying a foot injurty and SRK goes on to show her feet. Kajol is seen having a plaster on one of her foot. Sooner then, Kapil informs that no one can stop true lovers and says it in SRK’s style and for this reason Kajol came. SRK pulls Kapil’s leg and asks to whom he was referring to. Kapil gives SRK’s name. He speaks that Ajay recently came on his show and have seen his muscle power and thus will not say such thing for Kajol. Kapil’s first question for Kajol is why she came so late on his show. She replies that even after having a foot injury she came on his show now. He speaks that Kajol came to celebrate DDLJ’s success which was released 19 years ago and still looks very new and fresh. He compliments DDLJ’s continuous run for so many years.

Kapil then asks Kajol on hearing a rumor and doesn’t know whether its true or not and it suggests that once she came to know of going to his show she jumped with excitement and in the process injured her foot which invokes laughter. She suggests that whatever maybe the rumor but she liked his explanation. Kapil speaks that he needs to ask such funny questions and she informs of understanding him well and points out his colorful jacket and tries to make fun of him on lighter note. SRK also joins Kajol to pull Kapil’s leg and suggests that he has stolen his jacket from somewhere and moreover no one will make such jacket on their own. Kapil opens the floor to the audience. A man speaks that he has watched DDLJ 10 to 12 times and wants to dance on stage with SRK and brings the person Sunil Chaubey who was sitting beside with him. They come on stage and dances with SRK on the Mehndi Laga Ke Rakhna song. While, SRK dances according to the lyrics but the guys were having their own dance steps. Soon, SRK starts dancing while following them in those hilarious and random dance steps. SRK grooves well with much energy and stole the limelight in dance. Kajol was unwell and leaves from the stage soon after. Gutthi comes on stage on Mere Khwabon Mein.. song with much excitement and makes few jumps as well. She comes to SRK and with some finesses introduces herself as Gutthi Rita and calls SRK as Raj. He wants SRK to come forward and she enacts a scene with Sarson (mustard) fields and both will play the role of Raj and Gutthi Rita respectively. Gutthi Rita calls Raj’s name while SRK as Raj spreads his both hands in signature style and wants her to come close to him. Gutthi Rita in happy mood suggests that Indiawaale will take the bride today.

Gutthi Rita comes close to him and SRK as Raj tries to close his nose so as to ward off any bad smell coming from her to have some fun. She speaks of not coming more close since some untoward things can happen invoking laughter. Raj replies that in big cities there can be some small things going on and asks her to not fear. She then replies that Raj is speaking like Ajit ji (yesteryear legendary actor) and smiles and then asks him if there are small talks then what name would they give to their children invoking laughter. SRK also dances with Gutthi on Tujhe Dekho To Yeh Jaana Sanam song with fusion of different dance steps which looked refreshing and Gutthi follows them well. They end their dance with the signature SRK’s dance step of spreading hands. Kapil signs off by informing the viewers about another episode with SRK and DDLJ cast tomorrow (Sunday). Stay tuned to Comedy Nights on Colors.

Additional Note:
* Dilwale Dulhania Le Jayenge (The Brave Hearted Will Take Away the Bride) is a Hindi Romantic drama film first released in October 1995.
* It continues to run for more than 1000 Weeks in Maratha Mandir movie theatre in Mumbai as of December 2014.
* In the movie, Raj used to call Simran as Senorita fondly and in Comedy Nights, Gutthi enacts the role of Gutthi Rita which mimics Senorita. Senorita is Spanish language equivalent to Miss or Lady.
* Read more at DDLJ’s Wikipedia page. Official Twitter page of DDLJ