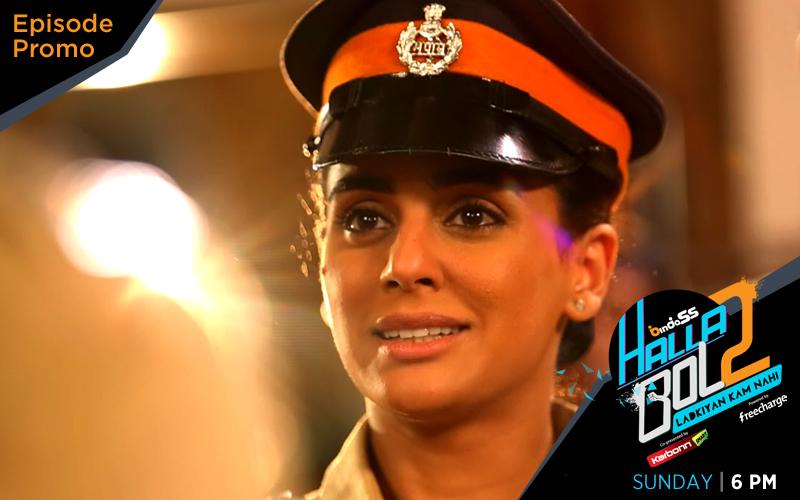 Karan Tacker (the host) speaks the girls are considered weaker sex even in 2014. When we see a girl in uniform we think her as weak and don’t give much respect. She writes the same tests and exams and deserves the job. Today’s story is about a girl Malvika Salve who wanted to find her place in a man’s world. Whether she will win her fight ?

The story starts with Malvika seen with her husband Dev and sister-in law Aashi and speaks about her first job. She takes the breakfast and leaves in police inform from her home. She reaches the police station and some police officers there are making some taunts on her. Malvika comes and introduces herself. One of the officers asks whether she knows cooking and she replies yes. He then asks her to take care of the canteen since the girls have magic in their hands and the men will take care of police duties. She was speaking with Mr Karthik and sooner then ACP comes and takes both of them for a meeting. The ACP speaks of a high-profile case and assigns it to both of them. Karthik is being told to provide the leads to Malvika and later he informs that women cannot match with men. He asks her to take his orders since all his team take his orders. She asks whether he took care of home and then asks whether he gave a birth to a child. She speaks of women’s capabilities and suggests that pain is being given to women since the men can’t handle it. She speaks that more dangerous is harassing a lady officer and he can get fired from job.

The ACP informs of a farm house where some drug peddlars will be found. Karthik speaks of a plan on how to put raid there and also Malvika speaks of her plan. Malvika and Karthik leaves with the police for the farmhouse and reaches there. The party is going on full swing there and the police stops it. Malvika finds one man trying to escape and he looked suspicious to her and carrying drugs. The man is seen in the restroom and flushes the drugs and Malvika sees him doing it. She arrests him and Karthik  at his learns that only alcohol is found. Malvika comes with the man whom she arrests and Karthik is afraid and informs her that he is Raghav Singhal – a top industrialist of the country. She speaks that Raghav has disposed drugs in the restroom. Karthik doesn’t listen to her and opens the handcuff thereby releasing Raghav from arrest. Raghav after the release thinks that Malvika has made fun of him without any proof and threatens an action against her. But he will not do such thing since he believes in women empowerment. He makes some comments on her while trying to come close to her and suggests that she is beautiful and then asks about her salary – 10K, 20K.. He tries to touch her and she replies that once he gets jailed then he will know his position. He introduces his name and threatens her that the result will be not good and she has to remember. He again gets back in the party mode. He speaks to himself that Malvika Salve will pay the price.

Malvika’s husband Dev reads the newspaper in the morning and finds an article that Raghav Singhal has accused Malvika of arresting him without any proof and also with wrong intentions. Dev is upset and Malviaka at her office tries to convince the ACP on how she saw Raghav Singhal disposing the drugs at the farmhouse. He suspends her from police duty without listening to her. She becomes shocked and suggests that she is right and they can prove Raghav as wrong. She requests dearly but in vain. Malvika removes her belt, cap and accepts her suspension but carries a heavy heart. Malvika is seen home and looks quiet and Aashi comes and reads the newspaper article which tries to defame Malvika. Malvika speaks of not doing any wrong to Aashi who was insisting her to speak. Aashi calls her as the best and also the true people aren’t defeated and asks Malvika to not take stress. Aashi wants Malvika to come with her for shopping and both goes for shopping. While returning and looking for taxi, Aashi is kidnapped by goons and Malvika couldn’t help her sister-in law and is pushed away. Malvika is worried and calls the police station. She comes to the police station with her husband Dev and she is being advised to apologize to Raghav and Kartik believes that Raghav is behind the kidnapping. Dev and Malvika comes home and he blames her for his sister’s condition and if something wrong happens with Aashi only she will be blamed. Sooner then, Malvika gets a video message with Aashi seen lying on a bed after forced to get intoxicated with drugs and also physical abuse. Raghav calls Malvika and asks her to not worry. He makes more taunts and she vows to find him. Aashi comes home and looks completely drugged and intoxicated and Malvika tries to support her. Aashi is in shock and Malvika at her end next morning remembers the Aashi kidnapping, Dev’s putting blame on her.

Later in the night, Dev speaks to Malvika because of her one mistake Aashi’s life is destroyed. Malvika speaks of just doing her duty. Dev blames her and suggests that people are right to say that girls should be in their limits. She asks what her mistake – That she is a girl and the girls need to take permission for everything and how could they walk and match men in their work. Malvika says that she is not wrong and haven’t done any wrong and was doing work and serving her role. She vows to not let men live easily who makes women weaker. She suggests that even Dev didn’t support her and now she will fight alone with people’s thinking and with the man with whom people is afraid of. She vows to find her self-respect and also justice for Aashi [Halla Bol title song plays]. Malvika gets info on Raghav from a constable and she goes to Raghav’s place after following him. There is a party scene there and she tries to sneak into and finally goes inside. She finds Raghav taking drug shots and also drugging a girl. Malvika tries to take the video and the drugged girl is going to be assaulted by Raghav’s colleague. Malvika’s phone rings and Raghav comes to know that there is someone outside his room. He wants the men to shift the girls to other farm house and then carries a gun. He asks the hiding person [Malvika] to come out and then finds her and shoots at her. Raghav speaks that no one has gone from there alive and even she will be killed and points the gun at her. She counters him and hits back and also hits at his private parts which makes him fall. She takes the gun and asks him why he is afraid now ? She asks him to show his masculinity and then goes on to slap him and also some punches. She takes revenge for inflicting insult to her, pain to family, considering police as mere servants and another punch for considering women as weaker sex. The police comes there with ACP and Karthik and arrests Raghav and she also hands the video proof of Raghav’s crime in selling dugs and his involvement in women trafficking racket.

Malvika is complimented by ACP and also gets a promotion in the dept and she is welcomed back with pride as with her courage a high-profile case has been solved after nearly 8 months. Karthik apologizes to Malvika for his earlier behavior and cites his own insecurities. She suggests to him that they are equals in a team and not lesser or more. Malvika’s husband comes there and also supports her. Malvika emerged victorius with her courage and determination.

Karan speaks that Malvika has proved her worth and there will be one day when Malvika like girls will get their rights. A guest on the show, a girl who works as a security agent in Mumbai with a security agency. She speaks of her family telling her to study and then get married. She found an academy to train for security agency. In the end, she proved others wrong. Karan says that women are not weaker and if they want they can fly and soar high with their wings.

Additional Note:
* We (TellyReviews) believe that Actors have given an amazing performance to an thoughtful and impactful story of Malvika’s fightback for equality and justice. Kudos to Actors, the team and Bindass TV.