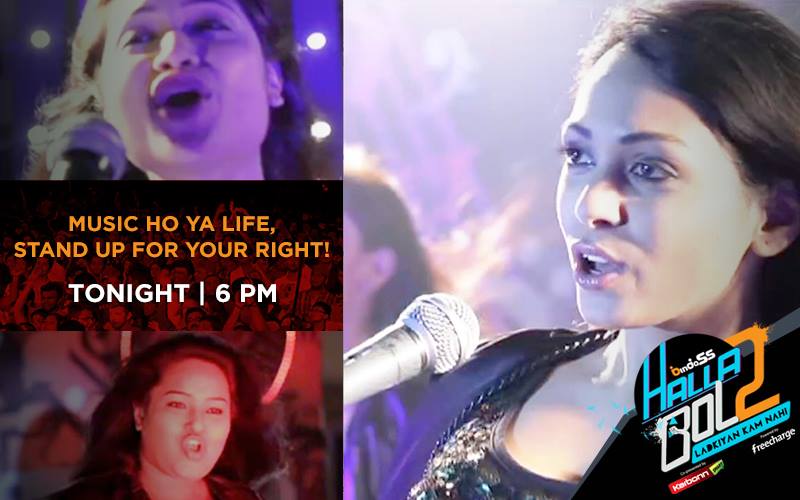 Karan Tacker (the host) speaks about how dedication is important with talent. He asks why girls’ passion is not allowed by some people and needs men’s permission. For Tara, Music was the way to convey her feelings. Let’s see her inspiring story and fightback.

The story is set in Lucknow, 2010. Tara comes to know of a intercollege Rock band competition and she calls Mohit and other students join. Some of the boys come and Shiv informs that girls cannot be part of a rock band. He threatens Mohit and leaves from there. Tara is shocked and Mohit speaks of talking with the principal. She comes home and speaks to other girls about Shiv stopping girls participation and she asks why he acts in that way. The girls compliment Tara and thinks she is breaking the rules of the hostel by giving the excuse of rock band. They begin to celebrate and sing together. Next day, Mohit and Tara comes to meet the Dean and he gives her the go ahead to participate in the rock band. She is happy and Mohit’s friends are worried about the problems that come with Tara’s presence in their band. Mohit tries to inform his friends that Shiv will not create problems and they proceed to practice. Shiv comes to their room and asks Tara and Mohit to stop their music practice. She informs Shiv that the Dean has given the go ahead for her to participate. Sooner then, the Dean comes there and Shiv speaks about the city Lucknow and thinks such things doesn’t suit the girls. The Dean agrees with Shiv’s concerns and asks him to leave from there. Shiv leaves with vengeance in mind against Tara.

Later in the evening, the warden has caught some boys and Tara and other girls come to see those boys. One of the boys speak that Tara has called them there and she speaks of not knowing those boys and haven’t seen them earlier. The boys continue to suggest on coming there to have party, drinks and music and tell the warden to come with them to find drinks in Tara’s room. The warden comes to her room and finds beer bottles and the boys put more accusation against Tara. They leave with shrewd smile on their face. The warden inquires more and warns the girls that their parents will be informed. Tara get taunts from other girls.

Karan (the host) speaks that Rock music was not easily accepted and some people think it is related to drugs, drinks and irresponsible behavior. Such thinking was exploited by some boys to falsely accuse Tara. There are some boys whose ego gets hurt to see the girl succeeding. Karan suggests that its the matter of thinking and only once it changes then society would usher in change as well.

Tara’s friend speaks to her dad and asks him to listen once but he is not willing to hear anything. Tara meets another friend and informs that Shiv is behind that false accusation and trickery. Tara’s friend suggests that future is not made with Rock band and doesn’t give good vibes to her and leaves. The Dean gives a warning to Tara and doesn’t want to give her another chance. She speaks that Shiv is behind all such things and he asks her to not take troubles if she knows shiv’s actions. Later, she meets Mohit and he is angry with her and thinks that his friends Parth and Raman were correct. He informs her that his career is important and thinks her music is not sincere. He breaks off the relationship and informs that she doesn’t have any role in his band and is sure he will win the contest without her help. Tara gets heartbreak and dejection and Mohit’s harsh words continue to haunt her. She begins to cry. [Preet song plays] Tara’s friends come to see her at the hostel room. She asks them to not worry and instead they need to focus on their lives. Her friends speak of not having strength but now they are back and will support Tara. They are worried about not having a band and Tara speaks they have a super duper band which brings smile on all their faces.

Tara and her friends practice music with their own rock band [Aankhon Mein Jiska Toi Koi Khwab Hain song plays] and she meets the coordinator of the rock band competition. The girls even practice at their hostel room and next day she meets the coordinator of not able to audition at the college. He asks her to not worry after knowing her story and how her rock band was created. Moreover, he asks her to come on time for the audition and the competition. Shiv and his friends find Tara happy and wonders what is going on and wants to keep an eye on her. Meanwhile, Tara and her friends practice music and is happy with the rehearsals and prepares to participate in the concert. One of the girls speak of having rehearsed since one week but now gets nervousness. Tara motivates them and speaks that her confidence was broken but because of her friends she got motivated another time. Soon, another girl speaks of not worrying about win or loss and is sure they will rock it. Shiv and his boys come there and comes to know of the rock band. They get hold of the girls and break the music instruments including guitar. Tara and her friends are shocked and he informs them their stubbornness have resulted in their current situation. He asks why they were becoming oversmart. They leave while the girls are in tears and thinks its all over. Tara gets quiet and looks at the broken music instruments and her earlier words on referring to have a super duper band and also the rehearsals. She contemplates more and informs the girls that things are not finished yet and they will definetely participate in the rock concert and have a plan.

At the rock concert, the coordinator speaks of removing the girls rock band entry since he thinks they will not come. Mohit and his boys come with their rock band and are the final contestants. The host speaks the judges about the result. Tara comes there and asks the judges to give them one chance before declaring the result. The judges agree and Tara and her girls without much music instruments creates tune by clapping their hands and with mouth. They perform on the chooley Aasmaan song while wearing all black. The audience and judges get excited with the performance. During the performance, Mohit realizes his mistake and appreciates the performance while Shiv continue to remain annoyed. The judges come on the stage and speaks that Tara and her band haven’t used any music instrument but still gave an amazing performance. He speaks that Tara’s band are not in the official list since they cannot be winners. He suggests that the girls have proven their calibre and thus rightaway going to sign the girls and will release their album. The Dean is happy to see girls success. Tara and girls come on stage and speaks that they were actually going to perform rock music. But some people have broken their instruments and she suggests that they are the girls who are not ready to accept defeat. Shiv comes to confront Tara and speaks of not easily letting her win. Tara slaps him and says Halla Bol.. [Halla Bol tune plays].

Karan speaks that Tara wanted to sing for artistic satisfaction. He speaks that Tara has proven her talent with limited resources and suggests that not all girls are fortunate like Tara. He signs off by asking the girls to have dreams and to not be quiet since they are not lesser than anyone [Ladkiyan Kam Nahi in hindi].

Info on Cast:
* Tara is portrayed by Actress who was recently seen in the role of Jaya in Pyaar Tune Kya Kiya [Season 3 Episode 4 which starred Juhi Aslam and Harssh Rajput aired on 12th December 2014] and Yeh Hai Aashiqui Episodes.