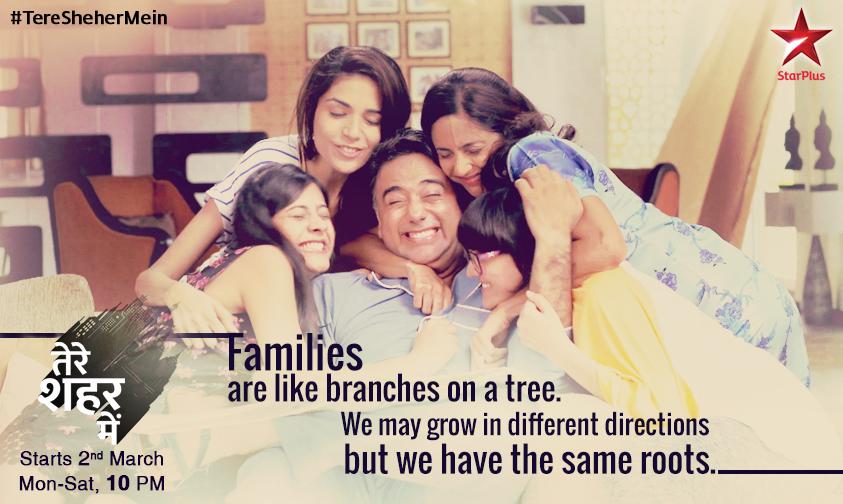 Tere Sheher Mein is a new show offering from Star Plus. The story is about Amaya Mathur and her family and how with change in time and circumstances their life faced such a drastic change. The theme highlights – when a person’s time is well then everything goes on fine – friendship, love, family and all things have happy feelings.  But it is also true that once time changes its course it would also bring change in friendship, love. It is true that everyone faces hard time at one time or other but some people couldn’t cope with it while others come out of it with ease. First, let’s dvelve into Amaya’s life. Amaya is beautiful and has enchanting destiny, lots of love from her family, and also gets much financial support via credit cards from her father. Her father thinks that money is used to solve the problems. Amaya alongwith three sisters and her parents lives in Paris and all daughters were princess for their loving and caring father. Amaya and her sisters were flamboyant with cars, friends and parties. Moreover, Amaya’s  eldest sister was engaged as well.

But, all happier things suddenly came to a halt when Amaya’s father Rishi Mathur was charged with a bank scam and was accused as a fraud. What follows after is his death. Amaya and her family were shattered at the loss which also had serious recurpursions – media scrutiny, loosing financial status. Amaya’s family was forced to move to Benaras, India. Amaya’s mother bears the brunt of her husband’s passing away and the responsibilities now come on her shoulder but she is unable to cope with it.  However, Amaya holds courage and works towards strengthening the emotional support in her family and is also defiant to not give up, face the situation at hand and not going to accept defeat. Amaya and her family begin their life in Benaras and prepares to adapt with new setting.  The show traces the journey of Amaya in how she comes out of the turmoil period and succeeds in her life.  It also depicts various intertwined emotions mixed with sorrow, love, and happiness. Will Amaya be able to consolidate her mother and usher vibrancy and hope ? The show is expected to take Everest time slot @ 10:00 PM once the former ends its telecast. Tere Sheher Mein is going to start on 2nd March 2015 – Monday to Saturday @ 10:00 PM.

Info On Cast:
* Amaya Mathur is portrayed by model and actress Hiba Nawab
– Hiba is very young around 17 years. She appeared in the films and TV series such as Saat Phere, Lo Ho Gai Pooja Is Ghar Ki and Shhh Phir Koi Hai as child Artist and did modeling in Delhi before her foray in acting.
– Worked in Channel V’s Crazy Stupid Ishq [2013].
– Hiba’s Twitter page