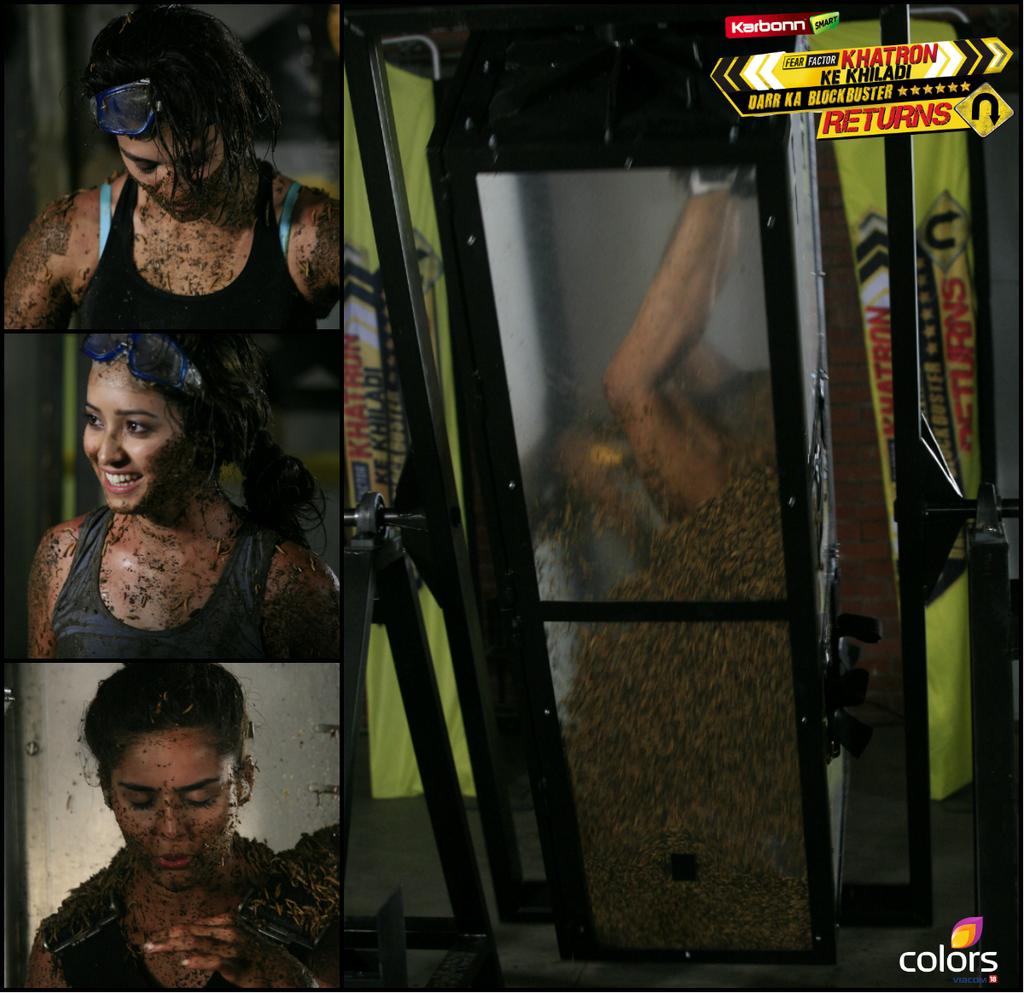 Rohit Shetty (the host/mentor) speaks of a family that have passed away in 1995. Riddhi speaks of strange things [scary, horror] happening at their home – Darr Ka Ghar. Sana, Iqbal, Archana face horror there. Rohit asks Rakesh to share some story of ghosts from his village. He pulls the leg of Rakesh with Natalia. After that horror comical fun, Rohit talks about safety and all the stunts are under expert supervision and shouldn’t be tried.

1st STUNT: SHOCKEEN, Location – Counter Manski Loof,
Contestants have to first swim and then climb to an aerial container which have pathways and also hanging chains are present which have electric shock. They need to pluck the 10 flags [1 pt each] and can get shocks in doing so. Finally, there is a last flag [5 pts] which need to be taken with a jump followed by diving in water.

* Harshad Arora
Harshad swims and climbs the ladder to reach the aerial container. He tries to pluck the first flag but gets a shock. He decides to crawl and gets a shock when he holds the chain. Rohit asks Harshad to try once but he feels much upset. And to his dismay, the first flag falls down. Rohit tries to motivate him further asking to bear some electric current. He finally decides to crawl to the final super flag and plucks it with a jump followed by diving in the water. Harshad completes his stunt and collects 5 pts.

* Sana Khan
Sana climbs the ladder while having a shaky start. She gets the shock on touching the first flag. She crawls on her back and manages to pluck three flags bearing the shock as Rohit advised her to feel it with a shout before actually touching the flag. That strategy worked and she comes to the super flag. She emerges successful in her final jump though showed hesitation at the start. She collected 8 points.

* Rashami Desai
She does prayers and reaches the ridge. She crawls and takes the first flag bearing the shock and follows Sana’s method of shouting before plucking the flag. She plucks 3 and prepares to collect the super flag. She takes composure and jumps to get the flag and dives in the water. She collected 8 points..

Result: Harshad gets the danger band and will participate in the elimination.

2nd STUNT: Buggy Ride, Location – Ottery School
Rohit asks the contestants whether they have seen horror movies and talks about typical witch shout. Natalia creates the witch shout first followed by Sana, Asha and Riddhi. Natalia emerges as the winner since Rohit finds the other three – Asha, Riddhi and Sana to create more humorous sound instead of scary.

Stunt: The contestants will be inside a tumbling Booth which is going to spin in random directions. The contestants have to retrive three keys while they are in motion and 3 bowls of bugs, worms will be with them. As the booth moves in all directions, the worms spread all over the place and the contestants need to use the keys to open three locks and finally press the lever to complete the stunt. The stunt time is 6 minutes.

* Natalia Kaur
The tumbler booth moves in random directions upside, down, circular and Natalia finds the keys to open the locks but couldn’t complete the stunt and signals Rohit to end her stunt. She stopped her stunt in 3 min 12 seconds.

* Asha Negi
She manages to get the keys and opens the 3 locks and completes her stunt in quick time and battles nausea, vomitting and bugs/worms. She completed the stunt. 4 min 51 seconds and wins Rohit’s praise.

* Archana Vijaya
She was not feeling well and was nervous before the stunt as the tumbler will be going to spin. She got the keys but couldn’t got the time to open the locks within 6 mins. Thus, was unable to complete her stunt. After the stunt, she speaks of trying much to complete but didn’t succeed.

Result: Natalia gets the fear funda or danger band and will participate in elimination round.

There is a small home with 2 rooms set-up which will be gradually immersed in the water as the contestants move closer to complete the stunt. The contestant first need to get the cutter and use it in cutting the ropes of the first room’s window (hexagon shape). They need to pass through it to reach the 2nd room. They need to repeat the first step with window in 2nd room. After passing through the window, they need to find a flag and then the room will be submerged fully. The contestant need to swim and come out of the water showing the flag to complete the stunt.

* Siddharth Bhardwaj
He starts the stunt and the home starts getting immersed in water gradually. Siddharth uses the cutter to cut the window rope of first room and manages to cut it and pass to second room’s window. During the stunt, he comes out time to time to get air for getting hold on his breath. He cuts the 2nd window and comes out while forgetting the flag. He goes again to get the flag and completes his stunt.

* Sagarika Ghatge
Sagarika is also a swimmer and a national level athlete. She starts cutting the first window and goes to the second room. She works on cutting the 2nd window and gets entagled and gets stucked in the 2nd window. Eventually, she needed help and the rescue staff helps her in coming out. She was unable to complete her stunt.

Result: Sagarika gets the fear funda for elimination.