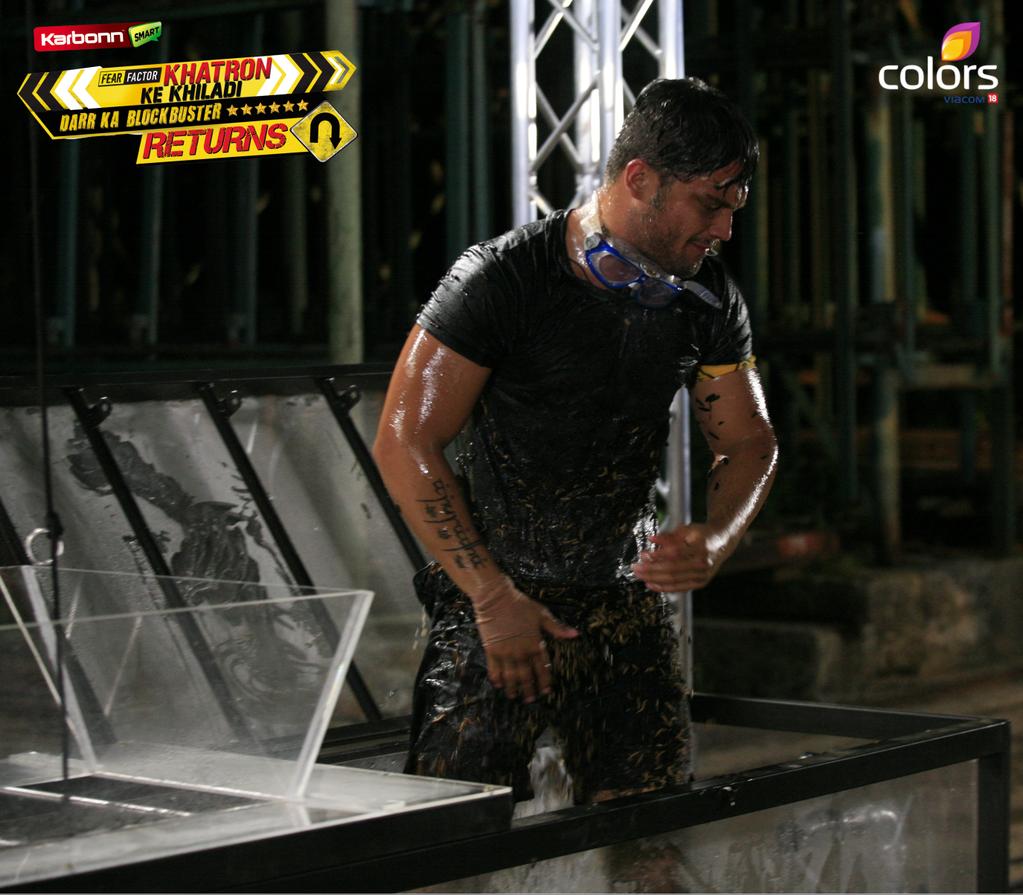 All the contestants spoke filmy dialogues to impress Rohit at the onset but he is not impressed. Rohit speaks that all stunts are performed under expert supervision and should not be tried.

1st STUNT: Bas Kar Na Yaar, Location: Long street, Cape Town
The contestants has to collect flags from lamp posts and also need to transfer eggs from one edge to the other edge of the moving bus. The stunt will be complete once the contestant reaches the last flag. Both activities to be done in parallel one after another. Flags [2pts] and Eggs [1 pt]. Sagarika, Ashish and Riddhi is revealed by the bus as the contestant and ordering is decided by contestants participating in a race with their remote controlled cars. Ashish wins it and informs Sagarika will go first.

* Sagarika Ghatge
She had a shoulder problem. She starts her stunt and Rohit is also standing with her on the bus. She takes the first flag but soon falls awkwardly on the bus floor. She misses a flag since she was collecting an egg. She collects some flags but for the next flag, she fell down and hangs to the bus’s side and her stunt was stopped midway. After the stunt, she speaks of having done the stunt with less speed but that was not the case. She clocked 3 Flags & 3 Eggs with a tally 9 pts

* Ashish Chowdhry
Ashish succeeds in collecting the flags and also put some eggs. He misses some flags and gets a slip but manages to collect the last flag. He collected 5 flags and missed 2 because of breeze. He earns 12 pts and later speaks of enjoying his stunt.

* Riddhi Dogra
Riddhi starts her stunt and collects 2 flags and moves to transfer the eggs. She keeps focus and collects flags but misses some and even falls down but manages to collect the last flag. She collected 5 Flags and 2 Eggs and earned 12 pts. She calls her experience as overwhelming.

Result:  Rohit speaks that Sagarika took the maximum risk as she made 3 rounds to transfer eggs. But Ashish and Riddhi fetch more flags and less eggs in only one round as they were of points and maths. Sagarika gets the danger band.

Ashish calls Rakesh as Munna and the fun banter continues with Rohit wants Ashish, Sana, Hussain, Iqbal to enact a kidnapping scene. Hussain kidnaps Sana and speaks to Ashish – her husband on his kidnapping and talk humorously.

The contestant will be lying on a platform and tied with belt and also one hand and legs are tied by means of locks. They need to unlock those three locks, take out the belt and swim out to complete the stunt. Moreover, they will be revolving on the platform which takes them inside water during its motion. It is a time based stunt and Iqbal wins the challenge to decide ordering via hand bout with Rakesh. Nevertheless, he decides to go first.

* Iqbal Khan
He starts his stunt and gets revolved with the platform motion. He quickly removes his hand lock. With some efforts, he unlocks the remaining two locks and swims out completing the stunt. He clocked 1 min 35 seconds.

* Rakesh Kumar
He quickly opens his 1st lock and with some efforts open the 2nd lock. Iqbal & other contestants motivate him and finally he unlocks the 3rd one and completes his stunt. He clocked 1 min 48 seconds.

Result: Rakesh gets the danger band. Rohit wants the contestants to give the best performance since they will get advantage which is Big and very useful to them.

The musical chair decides the ordering with Chang singing during contestants participation.  Siddharth comes out as the first contestant.

The contestant is lying on the coffin box and will be covered with worms all over the body and will breate using a pipe with their mouth. They need to open the knots of a rope 3 in total. The max time of the stunt is 1 5 mins.

* Siddharth Bhardwaj
Siddharth starts to open the 1st knot and succeeds. He goes to open the 2nd knot at other end and completes his stunt but took some time in the process. He clocked 8 min 26 seconds.

* Sagarika Ghatge
Her biggest fear is worms and insects. She was preparing and takes time before the stunt and feels much scared. Rohit comes forward to support and makes her relax. She quickly opens the first 2 knots and also the third knot. After the stunt, she revealed on feeling claustrophobic. She clocked 3 min 39 seconds.

* Hussain Kuwajerwala
He starts the stunt and quickly opens the three knots and completes his stunt. He clocked 3 minutes 19 seconds.

* Rakesh Kumar
He quickly opens the three knots and completes his stunt. He clocked 2 min 48 seconds.

* Sana Khan
She speaks of concentrating for her stunt. She was shivering and Rohit comes to relax her. She starts her stunt and quickly opens the two knots and the last one too. She clocked 1 min 56 seconds.

Elimination Result: Siddharth Bhardwaj gets eliminated and becomes the 2nd elimination after Harshad Arora. He doesn’t want to blame the luck. Rohit asks Siddharth to think first and then speak while also listening to his heart. He wishes Siddharth the best for future.

Next Week: Nandish Sandhu comes as the wildcard contestant. Friendships will be tested as contestants going to perform as couple but one against other. Asha and Riddhi – underwater stunt with levers and competing against each other, Dessert sand and car stunt, Rashami and Nandish [Rashami’s husband] compete against each other in revolving platform.