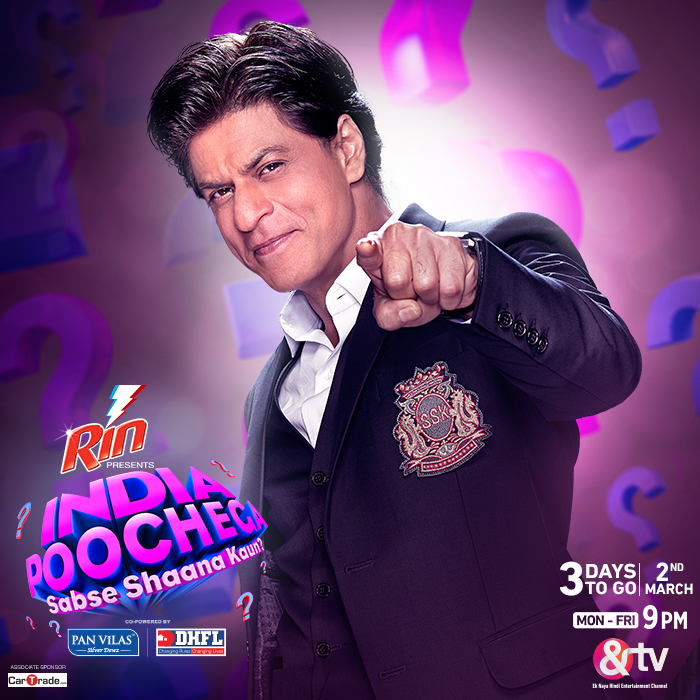 India Poochega Sabse Shaana Kaun [SSK, Who is the smartest fellow ?] is presented by actor and megastar – Shah Rukh Khan and got its 1st Episode telecast on a new GEC channel AND TV yesterday. At the onset, SRK entralls the viewers with dance performance on a remix of get on the dance floor, Indiawaale and Sabse Shaana Kaun tune songs. The show has the tagline – Don’t underestimate the shaanpati (smartness) of a common man. The format is such that the common man will ask and also answer the question. There are pool of questions with common people’s [different walks of life] recording and the contestants  need to chose from them. There are 3 rounds on the show where two pairs of common people compete against each other while answering to the questions posed. After those 3 rounds comes the final round – Koti ki Choti where celebrities will ask the questions to the pair which manage to make entry in that round. The max prize that the pair can win after crossing all levels is 1 Crore INR.

SRK’s last outing with Television hosting was with shows  – Kya Aap Paanchvi Pass Se Tez Hain, the Indian version of Are you Smarter Than a 5th Grader? [2008, Game show, Star Plus] and Zor Ka Jhatka: Total Wipeout, the Indian version of Wipeout [Imagine TV, 2011]. For the 1st Episode of SSK, two pairs competing against each other were Tahera & Zeenat  [Entertainmeny journos from Chandigarh] vs. Sachin & Rocky [Radio Jockeys from Delhi]. The 1st Round – Bhoni begins with Tahera and Zeenat and they chose a set of four common people by stopping the slider (express). From this set, they select the person whom they thought will ask the easiest question. In each round, two questions need to be answered.

* Rocky & Sachin answered both questions correctly and specifically the second question was about Shirmal’s (food item) name in Kashmir taken with Kawa [hot tea drink] and the duo answered it as Roti [breakfast food item with flour]. Moreover, the duo Rocky & Sachin gave an impromptu sketch of presenting Mr. Chaddha -fictitious character on not able to come out from his home as he was missing his inner wear. SRK compliments them on their talent.

Few notes from 2nd Round: SHANAPAN [Being Smart]

If the pair doesn’t wish to know the option, then the question’s price value would be doubled but there is a twist. The selection of common persons for a pair will be chosen by the competing pair. Thus, the girls will chose the set of people for boys and vice versa. Rocky and Vicky selects Anees – a scuba diving expert owning a company as well and think that girls won’t be able to answer him. They were right since Anees’s question – What does SC in Scuba meant ?  was answered incorrectly by the girl pair – Zeenat and Tahera. The girls took the options and chose Self-composed but the answer is self-contained. SCUBA [Self-contained underwater breathing apparatus]. SRK reminds all that Anees is his friend who has directed his underwater sequences in movies Don 2.

SRK makes the environment much lively by speaking in his usual self and asks the girls in the audience whether there are some limitaions in his dimples.The girls spoke of having much feelings for it and they go ahead to shower a kiss on his dimple bringing much smiles. For the second question, the girls got the answer though the boys tried to select a tough common man asking the question. Next, the girls turn come and they chose Iba Lindo as the questioner for boys. Iba is the lead singer of Shillong chamber music choir. She asked the meaning of Baichung – the initials of former Indian football captain Baichung Bhutia. The boys took options and answered little brother which turned out to be true. The boys leads by 15K rupees and earned 50K while the girls made 35K rupees. SRK speaks to girls in his witty style and consoles the girls by speaking about his learning from a great person and cites own dialogues from his movies – Every loser should get atleast one chance to become a winner [Happy New Year] and the one who after losing goes on to win is called a Baazigar [Baazigar]. He gave this context since the 3rd round is Bawaal Sawaal Round where both pairs will compete once again and the winner will go to participate in the final round Koti ki Choti and fight to win 1 Crore rupees.

SRK is going to share the Jab Tak Hai Jaan poem with the girl pair while Sachin from boys team going to share his emotional side. SRK’s sharing his anecdotes, witty one-liners, humour, dance, fun moments and songs are the essential elements of Sabse Shaana Kaun [SSK]. His amazing energy and momentum during the show is indeed like a fast train and provides much entertainment. SSK is telecast on AND TV from Monday to Friday @ 9 PM IST and is a new game format with competing pairs in a tussle trying to outdo each other with their smartness.