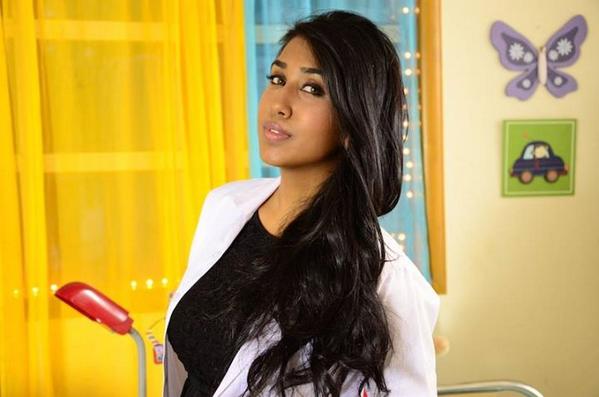 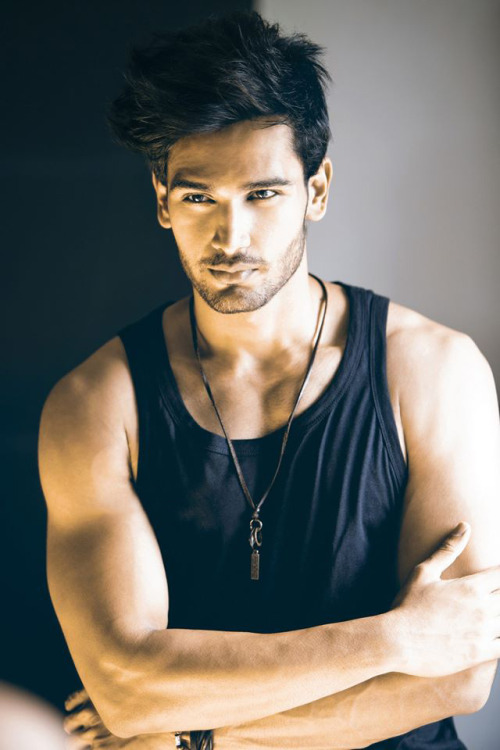 Meiyang (the host) speaks that on love you cannot apply force and shares a quote from poet Ghalib. The story is about Vanessa, Chris and Rahul. It starts with Vanessa asking her parents to come for dinner and she tells them to do prayers first before eating food. She prays with family and her mom compliments on how nicely she made the food – prawns curry. They also speak about Chris, her friend and thinks him as a good match for her but she is not interested to talk about it with a smile. Next morning, Vanessa meets Chris and he learns that she has passed in her exams and soon both leave to the college and he speaks fondly with her. He asks her about going to a movie and she replies on having study so its not possible. She instead suggests him to have a girlfriend and he starts speaking of being good looking and also have a job. He tries to impress her but she pulls her leg. Soon, Vanessa reaches the college and looks at a boy Rahul who was playing basketball and soon he gets introduced to her. Rahul is dramatics society president in college and also a basketball player. She starts speaking and he informs her on teaching basketball. They play basketball and he also goes to see her in the library. He asks her of wanting to go to bike ride but she is engrossed in study and informs him of getting 42 % marks.

He flirts her more and insists her to come to eat outside. But she is not interested so he plans to bully her by speaking that she is pregnant in the library. She goes out soon after and they spend time outside [Jane Yeh Kya Hogaya.. song plays] – bike ride and at the beach front. Later, she meets Chris and he asks what she is doing and seems she is busy. She takes a promise from him and speaks about Rahul and how she went with him on the beach front. She speaks of having crush on him and Chris asks whether he likes her as well. He congratulates her a bit and soon gets quiet and leaves. Meiyang (the host) speaks that Chris’s heart got broken after learning that Vanessa has love for someone else. However, Vanessa has fallen in love for the first time and its like magic.

Vanessa spends more time with Rahul [Kabhi socha.. Kabhi lage Aankhein Khol Di.. song plays] and later Rahul comes to see her on the bus and Chris is also travelling and present there. Chris gets introduced to Rahul. Rahul speaks of thinking about her in college and she speaks of not knowing what is he speaking. He confesses his love to her and she gets much excited and both hug each other in the bus. Later, they go for the dinner and soon she reaches his home to collect books. Both go inside his home and he tries to come close to her and both share intimate moments. [Khatra Khatra Mein Jalu.. Jal Ne Laga song plays] She then asks whether he will marry her and he replies yes. Meiyang (the host) speaks that Rahul was not knowing about the past or present and wasn’t much serious.

Few months passed by and Rahul on a fine day receieves a call from Vanessa. She asks him to come fast at the college. Rahul’s mom tells him that Vanessa or Vaheeda can’t be his girlfriend since she wants Vanita. Vanessa meets him at college and speaks of missing periods and its the first time. He asks her to relax and thinks it could be exam pressure and things will be fine. Vanessa does pregnancy checkup with the kit and learns she is pregnant and cries in the restroom. Later, she meets Rahul in the college and informs about her pregnancy. She speaks of being scared and he is also scared. He suggests that they can abort but she begins to cry. He gets more nervous but soon both go to the clinic and the doctor speaks of unable to do the abortion. The doctor suggests that in her medical condition the abortion cannot be done. Meiyang (the host) speaks that Vanessa and Rahul haven’t thought about the consequences and they were stuck and not knowing what to do..

Rahul speaks of feeling about her and speaks of coming to her home and asking for her marriage in hand. He asks whether she has another option and she thinks they cannot tell about the pregnancy. He wants to speak a lie to convince her parents for their marriage and hugs her. Later, Vanessa is at her home lost in herself and she informs her parents of falling in love with Rahul Sharma. Her dad thinks she is not serious and she speaks of loving him much and wants to marry him. Vanessa’s parents are not ready since she is just 20 years old but she informs that Rahul going to US for 2 years. She insists them to meet him once. Her dad asks what about the reaction of Rahul’s parents.  Meanwhile, Rahul tries to convince his parents that Vanessa is a good girl but his parents inform that they are not going to accept a girl belonging to other religion. He then opens up that she is pregnant though not intended but it comes out, and her mom thinks she has trapped him. She makes it clear to him that the girl will not come to their home and if he doesn’t listen then she will take her own life. Later, Vanessa tries to call Rahul but couldn’t reach and her dad suggests that Rahul understood well that its too early to marry and thus didnt’t came. He also tells the boys give deceit and asks her to grow up and suggests she needs to concentrate on studies.

Meiyang (the host) speaks that unwanted pregnancy, ego and elder’s differences and moreover Rahul’s parents has a problem with a catholic girl. Vanessa was helpless and lonely.

Vanessa goes to Rahul’s home and his mom gets angry and insults her. She gives warning to Vanessa and soon he comes there and speaks of being in a fix. She cries much and he informs her of being helpless and couldn’t support her. She gets teary eyed and holds him responsible. She cries at the beach front and also Rahul reminsces their past memories and cries [Preet song from Khoobsurat movie plays]. Chris finds Vanessa walking aimlessly into the sea and runs to rescue her from drowning. Soon, he learns about her pregnancy and asks why she didn’t told him earlier. He tells her to inform the truth to her parents and thinks they will forgive her. She is worried whether they will support her or not. Nevertheless, he speaks of supporting her always and she calls herself unlucky to not love him. Soon, Vanessa’s dad Anthony gets upset after learning of her pregnancy and even her mom gets angry. She asks her parents for help but her dad makes it clear that she can’t stay at their home. They are not going to support her. Sooner then, Chris comes there and speaks of knowing all and wants to marry Vanessa and it is not because of sympathy or compassion but because he genuinely loves her. He gives his words on taking care of her and asks her parents whether he can marry their daughter. Soon after, she gets ready for marriage and her mom thinks she got a one-off chance to found a partner in Chris.

Later, Vanessa prepares to get married to Chris but just then Rahul comes there and speaks of coming leaving behind parents and home. He will not run away and speaks of loving her much and will support her always. Vanessa’s dad gets agitated and Chris steps in and wishes to speak with Rahul. Chris thinks Rahul should be given a chance to talk and takes him aside with Vanessa. They go into a room and Rahul apologizes to Vanessa and speaks of feeling pain and was confused. He speaks of his decision that in every situation he will be with her. But Vanessa speaks that he is late since she will marry Chris. However, Chris suggests that she will not be happy with him and he wants to see her happy since she will be happy with Rahul. She hugs Chris on that note and he tells her to elope with Rahul via the back door. He sends them away while speaking of managing things there. As they left, Chris cries much and remembers past moments with Vanessa [PTKK title song plays].  The story ends on that heartfelt moments with Chris sacrificing his happiness and love.

Meiyang speaks that Chris haven’t thought about his own happiness and love but understood that first, Vanessa doesn’t love him; second, she would not be happy, and third Vanessa’s parents are not going to accept Rahul so he helped them in eloping. Vanessa and Rahul stayed in Pune and she gave a birth to a baby girl. After a while, Vanessa and Rahul’s parents accepted their true love and make them married.

Info on Cast:
* Vanessa is portrayed by model and actress Scarlett Rose
– Scarlett is the winner of MTV India’s Splitsvilla 7.
– Played a cameo role in Kaisi Yeh Yaariaan in the role of Rose.
– Scarlett’s Twitter page

* Chris is portrayed by model and actor Rohit Khandelwal
– Works in Channel V’s Million Dollar Girl in the role of Bhuvan – the leader of handloom weavers.
– Recently, Rohit portrayed the role of Veer in Bindass’ Yeh Hai Aashiqui Episode 76 aired on 16th November 2014.
– Follow the tag Rohit Khandelwal Actor to read his articles.

* Rahul is portrayed by actor Puneet Sharma
– Puneet worked in Bindass’ Yeh Hai Aashiqui Episode 45 aired on 1st June 2014 in the role of Karan, opposite actress Vrinda Dawda.
– Follow the tag Puneet Sharma Actor to read written articles on the episodes where he worked. 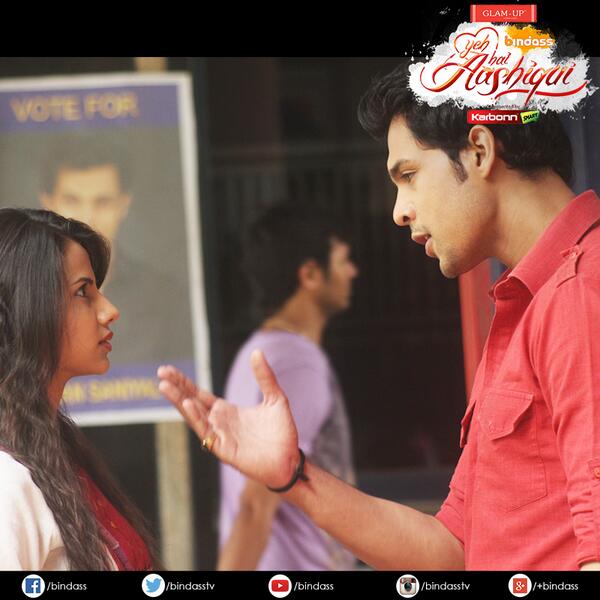