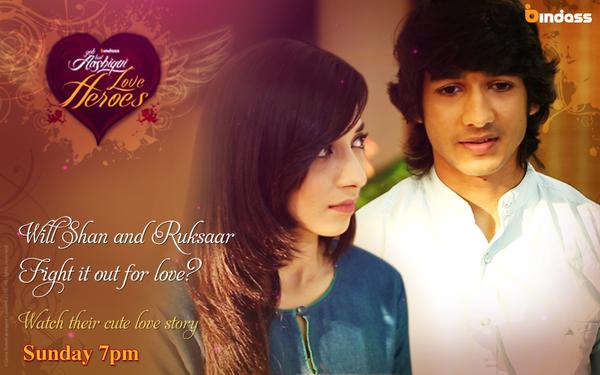 The story starts at the Royal Woods college of law with Shaan stammering in the class during the law discussion session and getting taunts by fellow students. Later, he recollects the same scene and also of his mom’s words while she was at the hospital that he should become a top lawyer. He feels teary eyed and soon Prof. Vikramjeet comes there and speaks of knowing what had happened to him in the class earlier. He further adds though haven’t had hope of such a thing but feels proud that Shaan took a step of speaking. He reminds Shaan that he is in the 5th year and for the first time he tried to become a speaker though was a researcher before. Shaan stammers a bit and speaks of not wanting to become a lawyer because of his speech problem. On that note, Vikramjeet informs him to complete his argument next time and motivates Shaan for the final term. He then gives Shaan a joining letter of a law firm where he can do an internship. He motivates him to go there and shine since time is just right.

Rithvik Dhanjani (the host) speaks that Shaan has a speech probllem and he always used to stammer since childhood and its not easy. He got support from Prof. Vikramjeet and welcomes all to Shaan-Ruksar love story.

Shaan goes to the law firm and enters the board room where he finds Ruksar breaking her foot sandal’s base since she doesn’t like them. She finds him there and apologizes for not noticing. She introduces herself as Ruksar Malik and asks his name. Shaan doesn’t utter a word and Prof. Vikramjeet comes there with Ajmal malik who is her father. Ruksar suggests that she is just an intern and will not get carried away to her father as the top head of that firm. Vikramjeet introduces Shaan to Ajmal Malik. Ajmal asks Shaan about his career field. He replies with stammering -civil law and speaks of following his passion. Ruksar thinks he is gutsy to follow his passion. Ajmal later speaks to Vikramjeet that Shaan has lot of speech problems and Vikramjeet replies that Shan is much talented and needs one chance to prove himself. Ruksar looks at Shaan while he is working and he too recognizes her. He asks what’s her problem and why she is looking at him while stammering. She asks that’s why he was quiet, and he couldn’t utter the word Bakwaas [Nonsense]. She suggests that her talks are not nonsense [Bakwaas] but apt [Jayaz] with a glee on her face. She thinks they need to work together and reminds that some people give them much importance making a taunt at him. Vikramjeet looks at them and gets glad and thinks that Shaan is understood by one more person – Ruksar. Next day, Shaan prepares a report and Ajmal compliments Shaan & Ruksar. He asks them the question – The boy was murdered by one of his family members, how did they came to that inference. Ruksar speaks that Shaan has done reviews and deduced it by studying the case. Shaan speaks of finding in the autopsy report that the child’s two ribs were broken which indicate that the boy is a victim of physical and domestic abuse.

He stammers more and Ruksar helps. Ajmal compliments their analysis and interpretation, and calls it commendable. Vikramjeet tells another intern Tahir to concentrate on his internship. Tahir soon hits Shaan outside the boardroom after getting jealous. Ruksar tells Shaan to ignore Tahir and pacifies him. He gets angry at her and soon apologizes. He admits on doing Bakwaas this time and both smile.  She thinks they should eat and speaks about common things in them though thinks he is a bit weird. She think he is intelligent but bit lesser than her. He wonders whether it is true and she asks him whether he brought the tiffin box. He speaks on having it but will eat later. As he was leaving, she holds his hand and asks if he eats with her then his food will not be digested. On that remark, Shaan stops and both share an eyelock. He tries to find his tiffin box and thinks Tahir has stolen it and haven’t thought such thing would happen. She wants him to share her tiffin box and speaks of liking Vegetarian food and knows he is veg. It turns out that Vikramjeet has taken the food packet of Shaan.

Rithvik (the host) speaks that Ruksar might be the first person who has treated his handicap in normal way. Moreover, Shaan’s self-confidence and determination has impressed Ruksar, and there was some connection between them. Prof. Vikramjeet, the love hero understood their connection and make them discover love.

Ruksar and Shaan are paired by Vikramjeet as a team during their work and Tahir gets more jealous. They spend more time together and Vikramjeet is happy. Vikramjeet gives them a new task to put a banner and Shaan shows concerns for her once she gets bit injured on her finger. Meanwhile, Tahir interriupts Ruksar at the library and he asks her what does she find in the charity case Shaan. She counters him by saying that intentionally she is not hanging out with him as he is fake. She makes more taunts and asks whether he felt bad and leaves from there. Tahir tells her to stay with own people. He reminds that he is Ruksar – muslim and Shaan is a hindu guy and for them to come close to be one is impossible. She asks Tahir to mind his own business. And suggests it is not guaranteed to be one even if you share the same religion. Later, she recollects what Tahir said is factually correct but she finds him something in Shaan. She admits that their religion can be a problem and she doesn’t want to create more problems for him. Soon, she finds a book 100 ways to deal with Stammering and wonders who kept the book in a law firm library. Later, in the evening, she finds Shaan in the parking place. He stammers and speaks of thinking where she has gone, and wants to drop her since it is very late in night. She speaks of her home being close so she can go back walking. She reminds that he has a scooty and he then learns she can’t sit properly. He speaks of understanding her and both have nice talk and smiles. He speaks of walking Chaar Kadam with her and both get smile. As they walk, he thinks there is much formality and she wants to speak but gets nervous.

She asks whether he has 10 minutes since she wants to do an experiment. She asks him to make a whistle and insists him. He does it well in the second attempt [YHA title song plays] and she also sings the tune. She asks where that beat, is it coming close to his heart. She asks him to say the words alongwith her and puts a finger on his mouth when he gets doubt. She asks him to close his eyes and they will say the words from the YHA song. She sings the Besharmiya… and he also begin to utter the same words while she holds her hand on his heart. He speaks those words from the song exceedingly well without interruption and she gets much glad.. She smiles with exuberance and showers a hug to him. He starts speaking while holding his heart and she informs him of removing his stammering problem with their efforts. She reminds that they are a brilliant team and will help him in final year placements in a law firm. Next morning, Shaan attends a meeting with Ajmal and Vikramjeet, and he talks on a case of Mr. Costa and soon gets interrupted. Ruksar motivates him and he continues to speak more and does it well. Ajmal observes Shaan and also notices Vikramjeet and infers the bonding of Shaan and Ruksar. Shaan at his end wonders about Ruksar’s family not agreeing to their relationship since their religion, cultures and customs are different. He meets Ruksar at the parking place and speaks of waiting for her. He asks whether she will come with him on a double scooty ride.

Soon, he starts speaking that there is something between them and she admits yes. She thinks it is difficult to hide such thing, and she is ready to go on the double-seat with him, hinting that she has feelings for him. Both smile on that note. As they were about to go, Ruksar’s dad Ajmal comes there and asks her to come to his cabin while informing Shaan to call his mentor Vikramjeet. Vikramjeet comes there and Ajmal gives him the termination letter of Shaan. Ajmal blames Vikramjeet for bringing Shaan and Ruksar close, and thinks himself of getting backstabbed. He tells Shaan to leave otherwise his remaining career will be destroyed as well. Shaan goes out and couldn’t tell Ruksar on what her dad said to him. She gets tensed. The story moves forward by 1 week and Shaan at his college is congratulated by other students on giving good speech and they are surprised with the drastic change in him. He reminisces all the moments he shared with Ruksar and gets teary eyed. Soon, Ruksar comes there and he asks how come she is there. She speaks of coming there since she always wanted to be with him or the place where he is present. She reminds him on how she has challenged her dad and told upfront that life decisions are taken by heart, and not by religion [YHA tile song plays]. She says its true though looks fimy and he completes the line on what both wants to say to each other. Both confesses their love for each other with I love you message, and Vikramjeet looks at them from a distance and gets glad. The story ends on that happy note with Shaan and Ruksar accepting their mutual love and moving ahead together.

Rithvik speaks that Ruksar and Shaan have accepted their love by looking beyond customs and traditions, and he suggests that love hero is needed for love and to understand it. Rithvik signs off by asking people to keep falling in love !!

* Incidentally, this is our 100th post on Yeh Hai Aashiqui. We dedicate this post to the hit pair – Shantanu & Vrushika who were amazing in this episode !!