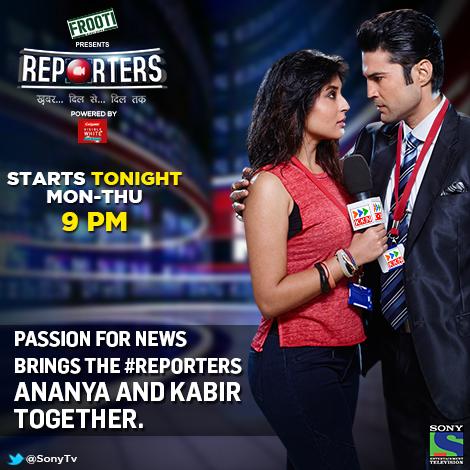 Reporters is the new finite show offering from Sony TV, and marks the return of Rajeev Khandelwal & Kritika Kamra,  Actors and Stars, on TV. The backdrop is news journalism and reporting at a TV channel.  It touches the aspect of where to draw the line between right & wrong in reporting news and its ethics. The show traces the journey of Kabir and Ananya who are both news journalists & have passion to work in their profession. Kabir is the Editor-In-Chief of KKN news channel. They are going to find and fall in love in that sophisticated environment where breaking news and to be up-to-date 24/7 is of prime importance. Ananya and Kabir are different individuals and have their own perspective which is quite opposite of each other.

Kabir thinks that there are indeed some news but he also points out with some shrewdness appeal about having some news which can also be ‘made’. An important aspect of Kabir’s thinking, approach and ethics is seen. Amidst that setting, how does their love going to survive or prosper ? Moreover, their pursuit of ambitions is important for them, and to compromise on them is very difficult. Will their love come in between their ambitions, or own ethics provide a hindrance in their way of life and love ? Reporters is going to telecast on Sony TV from Monday to Thursday @ 9 PM from 13th April 2015 onwards. Stay tuned to it.