Kunj is dying in the show. Anita and his goon shoot Kunj down. Kunj reached Goa to find Twinkle as per Anita’s plan. He has been shot while keeping his love for Twinkle. Kunj gets Yuvraj and argues with him. Yuvraj asks Kunj to go away, Anita wants to kill him. Yuvraj tells Kunj that he has come to alert and save Kunj. Kunj does not believe Yuvraj and pushes him away. Kunj goes to find Twinkle. He becomes a target by Anita.

Kunj reached there to save his wife, but faces death. Yuvraj tells Twinkle that he tried to stop Kunj, but Kunj did not believe him. Twinkle gets the news of Kunj’s death and faints. Yuvraj holds Twinkle in arms and tries to bring her out of her shock. Kunj’s character maybe alive, but actor would get changed. Siddhant Gupta will have his exit from this show. Keep reading. 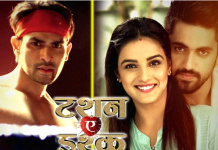