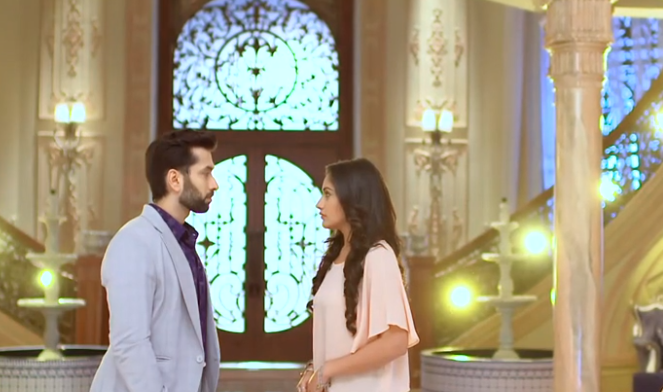 Rudra tells Shivay that Tia does not love him, it was just a deal, not a marriage, so Tia did not act angrily when Shivay walked away from the mandap. Rudra gets the mandap cleared to end chances of marriage. Shivay goes to see the video. Pinky is worried for Mrs. Kapoor’s state, who got more sorrowful. Jhanvi is happy that marriage did not happen in pressure. She says Tia’s family behaved wrong way. Pinky agrees with Jhanvi. They hope that Anika is right and succeeds to prove Tej and Shakti innocent.

Shivay talks in Anika’s language. Rudra and Omkara smile as Shivay is getting colored in Anika’s colors. Shivay plays the CD and learns more weird words from Anika. Anika shows the clue. None of them understand what she means to show. Shivay asks where is the clue. Rudra acts to understand clue, to bring effect in scene. Anika tells the movie poster, and describes the movie. Omkara asks the relation between poster and the clue. Anika then tells the clue meaning. Anika says this movie released last month. Shivay tells the girl is saying 5 year old date in the video, if this video is real, then poster can’t be of one month old movie. Shivay says all contents in the video would be fake. Anika gives the lead that maybe this girl is alive. Anika, Shivay, Omkara and Rudra go to some place to find the girl. Will they succeed? Keep reading.