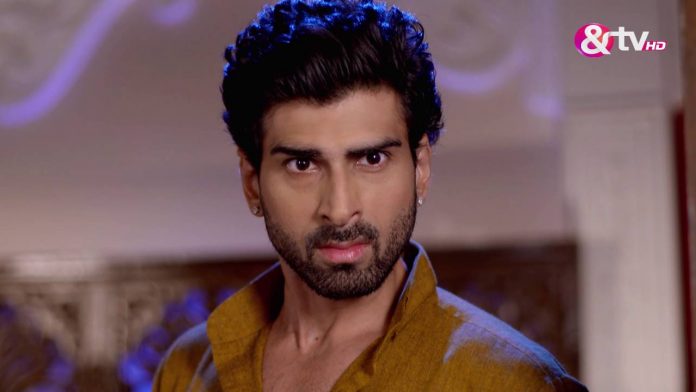 Mannu has taken the Devi’s avatar and has proved Amba’s innocence. Mannu succeeds to seek Amrit’s help and takes her home. Amrit tells Deena Biji that Jagan has planned all this dirty game to defame Amba, and make her leave from the village. On asking for proof, Amrit shows the video in which Jagan is seen planning the evil along with the Dhobi. Deena beats up Jagan and regrets a lot for doing the sin to doubt on her pure character bahu Amba. Amba forgives Deena as it was all Jagan’s plotting against her. Deena tells Mannu that she will take a decision on Jagan.

When Jagan comes home later, Deena slaps Jagan and tells him that the matter will reach village panchayat now, and only panchayat will take a decision on Jagan, to permit him to stay in village or not. Jagan gets shocked and fears to lose his standing in the village. Jagan feels insulted because of Amba and Mannu. After Deena beats him, Jagan decides to show his Raavan’s avatar.

Jagan plans to makes Deena fall from the stairs, which makes Deena critical. Jagan then puts the dirty blame on Amba for attempting to kill Deena. Jagan takes this matter to the panchayat, where Amba is questioned for Deena’s state. Mannu once again has to prove Amba’s innocent in the matter and also prove out Jagan’s wicked mind. How will Mannu win this time, when the blame is too high and enemy is residing inside the house? Keep reading.