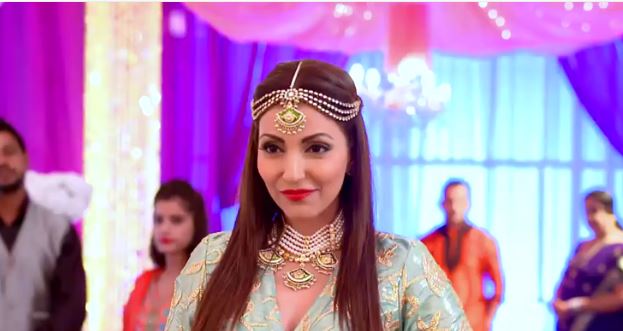 Anika does not find Tia. She says maybe Tia has run away after seeing us. Omkara says the petrol ended in her car, she did not run away. Anika tells them that she has seen resorts brochure in Tia’s purse. Omkara gets the resort details by GPS of Tia’s car.

Anika, Omkara and Rudra come to find Tia at the resorts. Omkara does not find any booking by Tia’s name. Anika tells them that maybe Tia booked by some other name. She recalls spotting swimming suit with Tia and tells them to come for checking pool side area once. Tia and Dushyant spend some time together. Tia sees Anika, Omkara and Rudra coming. She asks Dushyant to hide under the water. He refuses to hide, but Tia insists. Anika spots Tia alone.

Tia tells them that she has come here to de-stress, as Anika is giving her stress at home. Anika asks Tia did she come alone, who is with her. Tia tells Anika that she has come along and told Shivay about coming here. She asks Anika to call Shivay and check with him. Omkara apologizes to Tia. Anika, Omkara and Rudra leave from there. Tia asks Dushyant to come out, as they have left. Dushyant dies which gives a shock to Tia. Tia asks him not to play prank and trouble her. Tia recalls pushing him to hide under water. Tia’s push got him get hit on his head, by which he dies. Tia gets a big shock.

Rudra and Omkara come home with Anika. Rudra asks Omkara to lie to Shivay. Rudra tells Shivay that they did not follow anyone. Omkara tells Shivay that Anika felt to follow Tia. Rudra makes a story and lies to Shivay. Rudra does not let Omkara and Anika speak out. Omkara does not want to hide anything. Rudra tells them that it will be problem if they tell truth to Shivay. Shivay asks Anika what is the matter Rudra was hiding. Anika says nothing spoiled, so Shivay does not need to worry. Shivay asks her to tell the truth.

Anika tells the truth to Shivay. She says I was following Tia, I wanted to catch her red-handed with her husband, but she has failed me once again, she fooled me by her tricks.

Shivay asks Anika why did she follow Tia, when Tia has told him about her trip. He wonders what will Tia think if Omkara and Rudra do not trust her. He asks Anika to apologize to Tia. Anika refuses to apologizes. She asks Shivay to trust her, as Tia is lying to him. Shivay tells Anika that he can never trust her. Anika asks him to speak out when did she break his trust. He shouts on her for spending a night with Daksh and taking 15 lakhs for it. Anika can’t believe Shivay was holding such a big misunderstanding in his heart till now.