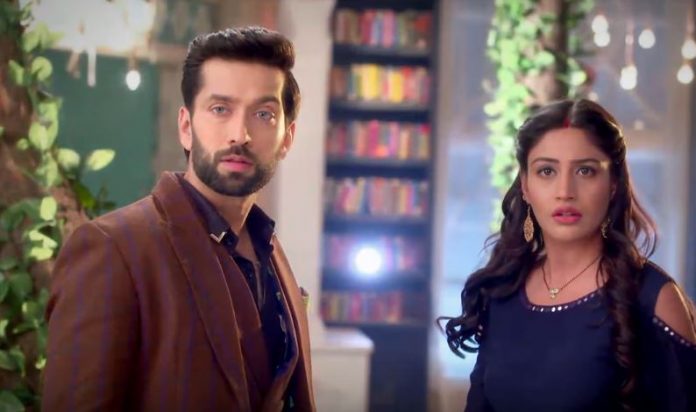 Shivay lifts Anika and takes her home. Anika asks him to leave her. Shivay says I can do anything you say. On seeing his family, Shivay drops Anika down. He makes excuse that he forgot his file and goes, leaving Anika on the floor.

Soumya helps Anika and asks her to take her file from room as well. The family smiles. Anika feels awkward and cooks up a story. Anika covers her Shivay’s doings. Pinky seems to stay unhappy. Shivay takes a namesake file as per his story.

Later, Shivay and Anika laugh on the situation. Anika asks Shivay why is he laughing. She calls him joker, who does not know to laugh. Shivay says I m not a joker, I was laughing here. Anika calls him weird-looking as he laughs once in a year. She starts taunting him as usual. Shivay gives her bat to hit on his head. He sweetly asks her to break all the mirrors/glasses of the house, but not leave talking to him. He prepares his apology for her.

Pinky informs Shivay that Tia’s mom is calling. Tia locked herself in room, she is stating of committing suicide, rush to her. Shivay does not care much. He asks Anika to come along. Shivay and Anika reach Tia’s house. Shivay tries to convince Tia to open the door. Tia pours kerosene on herself after Shivay lands in her house.

Shivay breaks the door. Tia conveniently plots and ignites the matchstick threatening Shivay that she will die. Shivay asks Tia why is she doing this. Tia asks Shivay what can she do now, when he has married someone else. She says I can’t see my dreams breaking. Shivay saves Tia by catching the burning matchstick in his hand. Tia sheds tears. Shivay asks Tia to just stop it. Anika is puzzled seeing Tia’s intense drama. Shivay tells Tia that he will marry her. Tia’s mom tries to pressurize and says we can’t wait till your divorce. Shivay asks what do you mean. Tia’s mom breaks the news that Tia is pregnant. Shivay and Anika get a big shock. Anika is sure that Tia is lying to him.