Avni tells Shweta that Neil and Riya’s marriage is just a business deal. Shweta gets worried for Neil’s future. Fatima talks to doctor and lies to him about Dayavanti. She proves Dayavanti mad, so that doctor keeps her in hospital for more time. Fatima messages Ketan that she has gone out for some important work. Fatima succeeds in the work given by Avni and Ali.

Ali compliments Riya and asks her to try some jewelry. Riya asks him to manage his cafe. Ali tells her that he can never do mistake in identifying real beauty. He suggests to click her picture and sent to Neil to see what Neil says. Shweta stops Prakash from signing the deal. She says our children’s happiness and marriage is important than deal, we can sign the deal when Dayavanti is around. She does not seal the deal and asks Ketan to call Dayavanti. She confronts Ketan about the business deal. She cancels the marriage telling them that she has heard Amol speaking out the truth.

Avni and Neela get glad seeing their plan working. Ketan tries to make Prakash emotional and lies that Dayavanti is a heart patient, she won’t be able to bear this shock. Prakash falls in the trap and apologizes from Shweta’s side. He keeps the marriage and deal matter intact. Prakash respects Dayavanti and worries for her health. Avni gets frustrated by losing to Dayavanti. Fatima meets Neil at Avni’s grave. She tells him Dayavanti’s truth, who has killed Aisha and Avni. Neil doubts Ananya is Avni. He promises Fatima that he will get justice for Aisha and Avni. Neil confirms the truth from Madhavi. She tells him about Avni having the bullet mark. Neil meets Avni and confronts her. 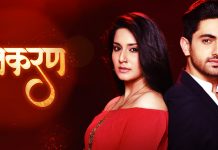 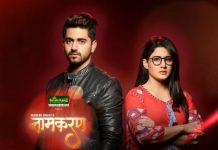 Naamkarann (PicFiction): Neil to learn something surprising about Avni