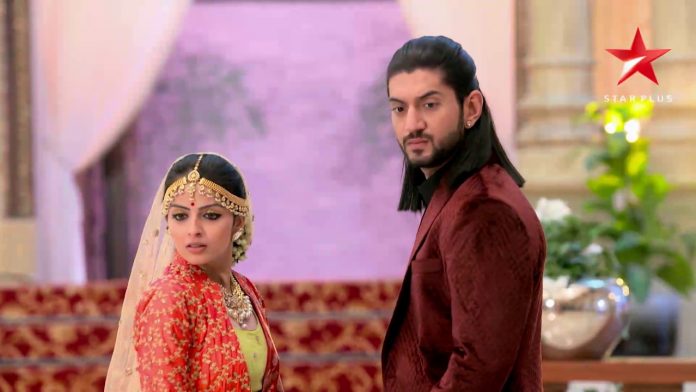 Gauri shares her Dabanng stories with the family. Anika asks Gauri about her love story beginning. Anika tells her that even her story is much similar and rocking. Gauri and Anika’s attacks on Omkara and Shivay fall at wrong places. Omkara asks Gauri not to bond with anyone, she won’t be given a place here to stay. He feels Gauri wants to stay back for money and luxury. He tells her that he won’t do this drama anymore and rather tell them the truth of her fraud. She decides to leave and asks him to tell everyone that she has run away. She says it would be good if they hate me.

Naintara asks some money from Shivay. She threatens him about Sahil and asks him to do what she tells him, only then Sahil will be safe. Shivay does not care for her words. She doubts and calls her goon to ask about Sahil. Khanna makes the goon lie to Naintara. She falls in Shivay’s plans. Naintara demands money from Pinky. She likes Pinky’s necklace and asks her to give it to him. Shivay tries to hear their conversation. Pinky gives the necklace and pays the price for making Anika out of the house. Shivay fails to see Pinky’s face. Shivay tells Anika that someone from family is helping Naintara.

Anika stops Gauri from leaving. She tells Buamaa and Jhanvi that Gauri is feeling lonely. Buamaa asks Omkara to be with Gauri. Omkara asks Anika why did she not leave. She tells him Anika stopped him. Omkara does not believe her and takes her to drop outside. Dadi stops Omkara from taking her bahu anywhere. Pinky suggests about Kulgotra puja, that would have Omkara and Gauri’s name added too. She finds an opportunity to insult Anika. Shivay does not want the puja to happen. Omkara is okay with Shivay’s decision. Dadi convinces Shivay for the puja.