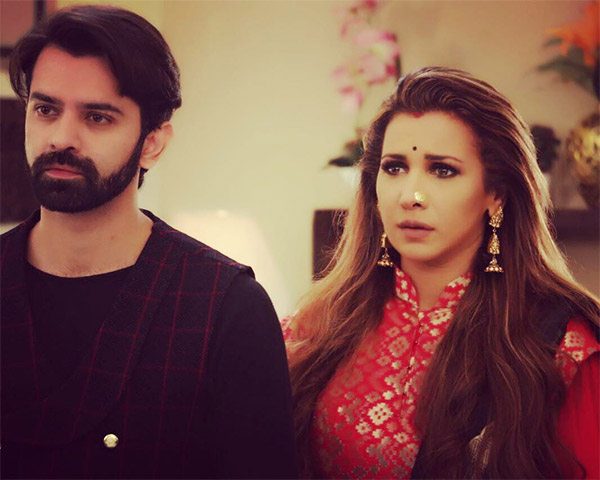 Advay exposes Shagun and Ranjit’s affair. Kajal curses Shakun for cheating her. She scolds Ranjit too. Pratham’s mum insults Indrani seeing the bad relations in her house. She calls off the alliance. Advay succeeds in breaking Chandni’s family and alliance. Indrani slaps Shakun and vents out her anger for breaking Kajal’s married life, her trust and hopes. She asks Shakun to leave from the house. Kajal gets upset when Ranjit leaves with Shakun. Indrani and Chandni offer support to Kajal. Chandni worries for Kajal. Chandni gets stunned when Advay reveals he has exposed Shakun’s affair to break her alliance. Chandni finds him too mean to not care for others, but feels it was important for Kajal to know Ranjit’s truth.

Nani asks Advay to atleast not stab Chandni nd his friendship this way. She feels ashamed of him. Advay tells her that he can never get friendly with Chandni. The girl fears for Indrani’s worries. Mama ji consoles Chandni. Advay tells Nani that Chandni has lied about her mum and everyone felt his mum is a Daayan. He holds her responsible for snatching his family. Advay does not know the other side of story. Chandni wanted to meet Dev once before he left the city. Advay wants her to pay the price of her mistakes. Nani asks him to think once that Chandni may be innocent. Advay is sure that Chandni is wrong. Chandni misses Dev. She feels Pratham won’t agree for marriage now and this will never go well with Indrani.

Indrani gets anger on Pratham’s mum. She reminds the deal between them. Pratham is already married and is marrying Chandni to get a child. Indrani sells off Chandni for 2 crores. Indrani knows Pratham can’t father a child. She still fixes Chandni’s marriage to just go ahead with the money deal. Pratham tells Chandni that he is ready to marry her. He gifts her costly earrings. Advay feels Chandni has no self respect that she is marrying Pratham for money. He misunderstands Chandni. Indrani helps Pratham and asks him to take Chandni out and take advantage of her fears. Advay gets stunned by knowing Indrani’s real intentions.