Tu Sooraj Main Saanjh Piyaji: Kanak is preparing to go to her inlaws. Bhabho and entire family is happy, except Vansh. Meenakshi does bidaai rituals for Kanak. Bhabho showers love on Kanak. They all get happy to send Kanak to inlaws happily. Kanak is also happy to enter her new life. Rathi family is accepting Uma. They give respect to Uma. Kanak gets emotional and takes Bhabho’s blessings. Vansh makes a filmi entry and challenges Uma. Vansh dislikes Uma and expresses his annoyance with Kanak’s decision. Kanak doesn’t want Ved and Vansh to insult Uma.

Beyhadh: Arjun and Saanjh finally got together. They celebrate some moments of peace after they got rid of Maya’s evil. Arjun is trying to assure Saanjh of his true love. Arjun is showering his love on Saanjh. Arjun takes Saanjh on a romantic date to the place where they first met. Saanjh gets much happy when Arjun confesses love to her and proposes her. Saanjh likes Arjun’s surprise. He gets much excited. Arjun plans a series of surprises for Saanjh and asks her not to cheat to spoil the fun. They spend some good time together.

Imli strikes a deal with Bhaiya ji, after knowing he has killed Chakor and made her out of their lives. Imli doesn’t shed a tear for Chakor and instead gets happy over Chakor’s death. Bhaiya ji thinks Imli will inform Suraj and Vivaan about his crime and aims to kill her. Imli stops him from shooting her and tells him the reason of hatred and revenge towards Chakor. She reveals that she is not pregnant and lost the baby long time back, and this truth was told to Vivaan by Chakor. She tells Bhaiya ji that she was also conspiring to corner and kill Chakor. She thanks him for saving her from committing such a crime. Bhaiya ji lets Imli go knowing her plan to deceive Suraj by lies. Imli thinks to lie to Suraj that Chakor has left him. 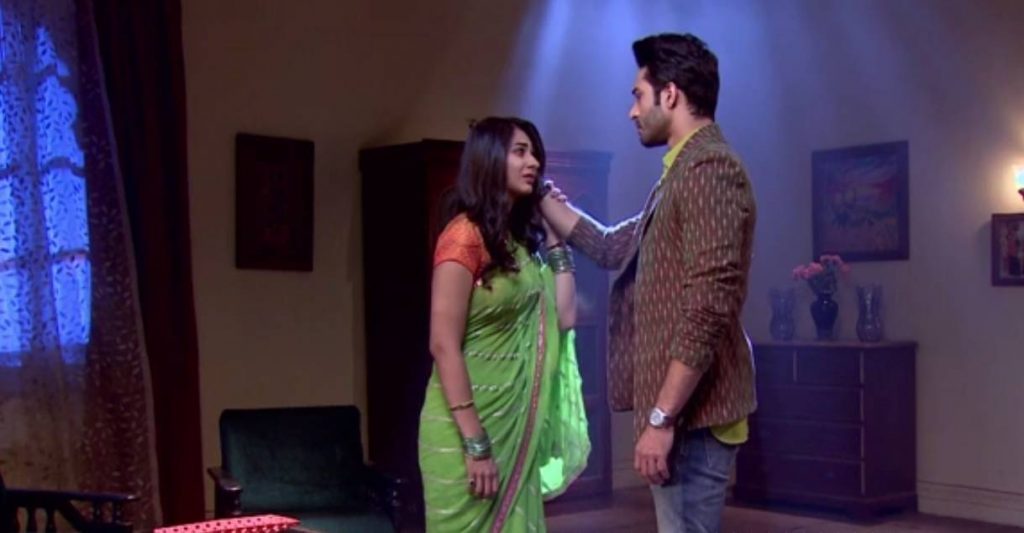 Kalki is given a Mata status by the villagers. Devanshi is against this, but Kusum Sundari and Kukarmi Devi have declared to everyone that Kalki is the next Mata, and she will be honors with the throne within a month’s time. Everyone accepts Kalki as their new temple head. Kalki also feels trapped by them and thinks of something. She asks them to cheer for Kusum Sundari, who is her real mum. Devanshi has always won everyone’s heart. Kukarmi challenges Maiyya to save her temple and devotees from her. Devanshi will be standing as the prime devotee of Maiyya and fight with Kukarmi. Devanshi reaches the temple and sides Kalki.

Dhhai Kilo Prem:
Dipika and Piyush have a lovey dovey eyelock. Dipika sits by Piyush’s side and takes care of him. Piyush is also in love with Dipika. She climbs the wall and comes to meet Piyush once. They care for each other. Dipika believes her choice was always right. Bua breaks their sweet moment. Bua doesn’t want Dipika to stay with them. Piyush misses Dipika. He is facing problems because of her presence. He thinks he is dreaming of Dipika. Dipika tells him that she is really there. Piyush has to convince dad to get Dipika back home. Dipika and Bua get into an argument. Bua puts all the blame on Dipika. Piyush’s dad doesn’t believe Dipika.

Harman wants to convince Soumya by love. Soumya still has annoyance and anger. She refuses to live to Harman, while he is also adamant to keep trying till Soumya changes her mind and accepts his love. Soumya asks him to understand a person’s identity matters the most, even more than love.