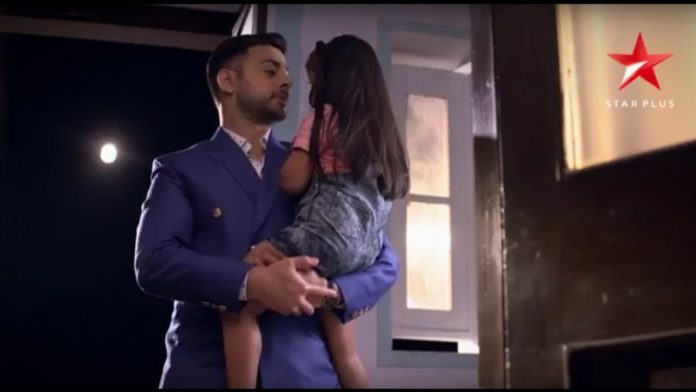 Avni gets Mishti home. She takes care of Mishti. Mishti calls her angel. She is happy to get away from Vidyut. Avni comforts Mishti’s fears. Juhi comes to meet Mishti. She sees Avni and Mishti together. Avni makes Mishti sleep. Juhi longs for her daughter. She feels helpless that she can’t tell Mishti that she is her mum. She wants to hug Mishti and be with her. She gets food for Mishti. She gets away from Mishti, as she has no answers. Juhi wants Vidyut to get punished. Vidyut doesn’t see Juhi in the hospital, as Avni stops her in time. Neil doesn’t want his plan to get revealed. He doesn’t wish Juhi’s life to fall in danger again. Avni and Mishti play a game.

Neil and Avni plan to send Mishti to some safe place. Juhi sees Mishti playing with a doll house. Mishti tells about her family. She doesn’t take Juhi’s name. She gets insecure when Mishti opts for Avni than her. Mishti doesn’t know Juhi is her mum. Juhi wants Mishti to accept her. She gets frustrated. Neela sees little Avni in Mishti. Neela explains Juhi that Mishti regards Avni her friend, but if she gives some time to Mishti, she will definitely realize mother’s love in Juhi. Avni is trying to give happiness to Mishti, believing she is Neil’s daughter.

Meanwhile, Neil interrogates Vidyut. He doesn’t face Vidyut. He sees him from behind the screen. The policemen try to build up pressure. Vidyut tells them that he just wants to talk to Neil. Neil keeps a watch on him. Vidyut asks Neil to stop being smart and come in front of him. Neil tells him that he will get many chances to meet him. Neil and Vidyut show attitude. Neil tells Vidyut that whenever he closes eyes, he will see Neil in dreams and get scared. Vidyut laughs on Neil’s overconfidence.

On the other hand, Avni is troubled as Bebe and Shweta are annoyed with her. Neil asks her relax, everything will get fine, she can manage. He says I trust you, you can manage family problems alone. He gets busy in work. He asks her to let him work. She asks why shall I face this alone when we both planned this together. She gets annoyed with him. Neil wants to complete his surprise arrangement. He wants to bring romance in their lives. He gets a gown to gift her. Neil plans a surprise for Avni.

Neil tells Avni that Vidyut has threatened him about the family. He tells her that he can’t send Juhi and Mishti away. Neil and Avni have a romantic moment. They get lost in each other’s eyes. Juhi interrupts them. She apologizes to them and gets away. Avni asks Neil why did he not say anything to Juhi. Neil tells her that he can’t risk Juhi’s life. Juhi knows Neil has moved on now. She still has a liking for him.

Neil asks Avni not to feel bad by Juhi’s presence. Avni spends time with Mishti. The family is happy as the things got fine. They have fear that Vidyut can come back and create troubles. Avni pledges to save Mishti from all the problems. She wants Neil’s daughter to have a good life. Vidyut reaches home and meets Mishti. He reveals that he is Mishti’s real dad, and he will never let Mishti go away. Avni learns the shocking truth.