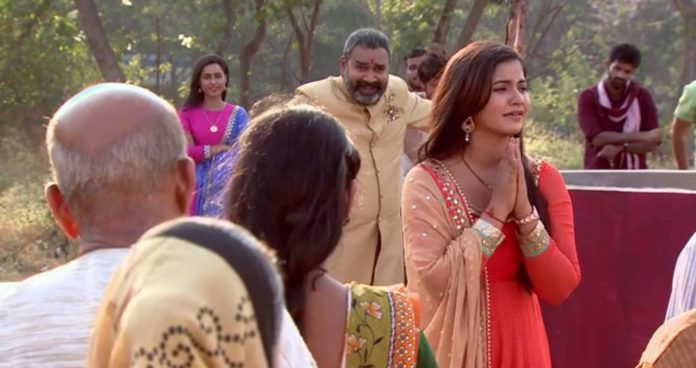 Bhaiya ji gets angry when his plan fails. He can’t tolerate Chakor’s return. Chakor and Suraj have fun time on the way home, while Imli gets jitters thinking of her dreams shattering. Imli vows to knock off Chakor from her way. Suraj worries thinking of Chakor’s hidden enemy residing in Aazaadgunj. He wants Chakor and their child to be fine. He decides to nab the culprit and secure Chakor. Suraj tries to take the lift. Chakor feels nausea and refuses to take lift from any junk van. Imli sends her goons to kill Chakor, but Suraj saves Chakor in nick of time.

The truck driver fails to hit them. Chakor gets angry on Suraj. Chakor argues with Suraj. She says you don’t know how to earn money, you don’t know work hard, how people work all day and earn a living, you didn’t think for me and child. She taunts him that she doesn’t know if Suraj deserves to become a father or not. She feels hungry. Suraj gets watermelons for her. She tells him that he doesn’t understand that pregnant women like to eat spicy food. Suraj deals with her mood swings. He thinks she is frustrated and scolding him. She deals with the problems on the way to home. She asks him to do some work, if he doesn’t do anything in such time, when will he learn.

Suraj surrenders to her anger. He cheers her up. They sit at the bus stop and wait for the next bus that would take them to Aazaadgunj. Suraj promises to prove himself as a responsible man. Chakor then calms down and tells him that she loves him the way he is. They reach Aazaadgunj. Kasturi and Bhuvan get glad meeting Chakor. Kasturi asks them to get married in the temple, so that none can separate them again. Chakor and Suraj look forward for a new beginning. Bhaiya ji loses his cool seeing Chakor. He thinks of taking things in his hands, when Imli fails to do anything.