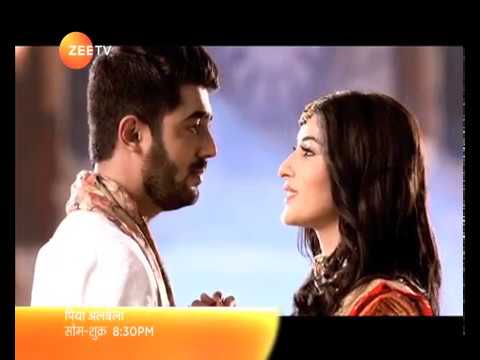 All the misunderstandings end between Pooja and Naren. There comes a big twist because of Mr. Kapoor. Pooja and Naren land in jail for Mr. Kapoor’s murder. Naren gets blamed for shooting Mr. Kapoor, while Pooja takes the blame on herself. Mr. Kapoor publicly threatened Naren. When Mr. Kapoor gets shot, the police sees Naren holding the gun and arrests him. Pooja tells them that she has shot Mr. Kapoor in defense to save Naren’s love. Pooja wants the real culprit to get punished. She says Naren is innocent. She tells Naren that she will bear the punishment, and he should support her decision for the sake of their love. Naren cries seeing her in lockup.

Pooja doesn’t eat the food, thinking even Naren would be hungry. Naren tells Pooja that he will not let her stay in jail. He uses his power and contacts to help Pooja. He gets the lawyer to bail her out. Pooja explains him that she can bear anything for him. She cheers him asking about their pending engagement.

Pooja tells Naren that the good thing is they are still together, their love can’t lose. She gives him a thread instead the ring, which he ties her to her finger, getting engaged to her. They hug and cry. Pooja has chosen the lockup to protect Naren. She thinks Naren has already gone through a lot, and he shouldn’t suffer more because of her. She holds herself responsible for getting Mr. Kapoor in their lives. She makes a sacrifice. She tells Naren that he is needed in the family, he should look after the family and protect them from Rahul and Surbhi.