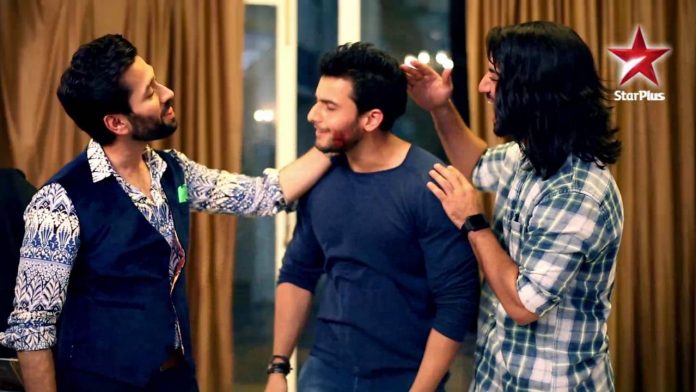 Shivay is spying on Shwetlana. He tries to find the tapes by which Shwetlana is blackmailing him. He doesn’t want the family to face tension. He shares the matter only with Omkara. They discuss their planning to catch Shwetlana. Shivay plans to send Omkara abroad. They see Rudra and have an emotional moment. Shivay hugs Rudra, on finding him low. Rudra hides about his breakup from them. Shivay and Rudra sit awake all night and spend time with Omkara, as he is going away from them. Rudra turns hilarious as he fails to have control over his sleep. Rudra gives his unnecessary tips to Omkara. Shivay and Gauri ask Omkara to take care of himself. Shivay says till we are together, Shwetlana can’t do anything. He promises to be fair towards Omkara and Rudra. Omkara leaves with a heavy heart.

Things begin to change in Omkara’s absence. Oberois get into an argument over the business stake. Shwetlana asks for her share, as she is Abhay’s wife. She tells Shivay that she wants her rights, she will not stay in guest room now. She asks Shivay to vacate Tej and Jhanvi’s room for her. Jhanvi gets upset.

Shwetlana’s drama gets on increasing. Everyone gets angry seeing her. Jhanvi asks Shwetlana to get out of the house. Shwetlana tells Jhanvi that she is the owner of the house now, while everyone else is like her servants. Everyone expects Shivay to do something and stop Shwetlana. Shivay doesn’t do anything. He gives the legal documents to Shwetlana. He tells everyone that he is giving Shwetlana her deserving share.

Shivay names Rudra and Omkara’s shares to Shwetlana. Shwetlana reveals to the family that Shivay has named fifty percent of the shares to her. The family gets a huge shock. Shivay tells the family that he has done what he had to. The family asks him to answer why did he take this decision, when he was the best brother, he has proved that brother is not a brother when its about money. Shivay bears all the taunts. Dadi asks Shivay how can he do this, its injustice with Omkara and Rudra. Pinky asks everyone to stop blaming Shivay.

Rudra knows Shivay took this decision after having a well thought. The family raises a question on Shivay’s love for his brothers. Shwetlana has come to break the family. Rudra shows his belief in Shivay and hugs him. Shwetlana wants to break Shivay and everyone, so that it gets easy for her to manipulate them. Shivay doesn’t answer anyone’s questions. Tej gets much upset with Shivay’s move. He tells Shivay that he will not let him snatch his sons’ rights. Anika gets worried seeing Shivay’s step and feels he is hiding a big thing. Shivay is helpless after seeing the complete video of Kalyani mills incident. Shwetlana tells Shivay that Obros have to bear the punishment for their dads’ mistakes. She shocks him with the evidence. She taunts Shivay for falling weak in front of her. She has got all the power in her hands. She wants to teach everyone a lesson. What will be Shivay’s next move? Keep reading.