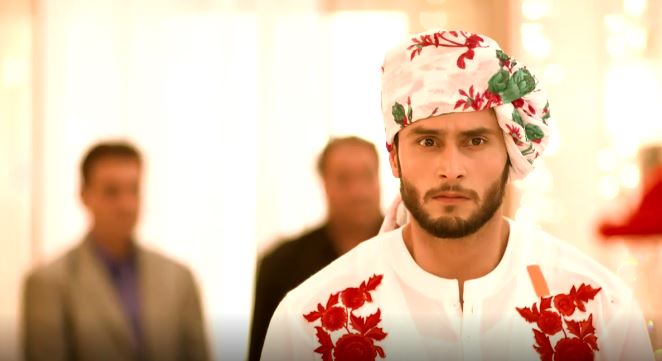 Shwetlana asks Shivay to slap Anika in front of the media. The media insists Shivay for doing justice with Shwetlana. The reporters ask him will he be able to do this. Shivay tells them that he will punish the wrong doer, he will get justice done in front of them. He supports Anika and makes her slap Shwetlana. He tells the media that Shwetlana has planned everything, she has the remote and made the chandelier fall over her to trap Anika. He scolds Shwetlana for cheating them again. Shwetlana gets hurt by the chandelier. Her nose gets hurt and she becomes a fun topic for everyone. Shwetlana gets humiliated.

She curses Shivay to cry for his brothers. She challenges that she will be breaking his family and separate the Obros. She wants to start with breaking Shivay and Anika. Anika gets scared by Shwetlana’s challenge. She tells Shivay that she is afraid to lose him. He tells her that he has made a plan against Shwetlana. He asks her to meet him at office.

Shivay meets Omkara at office and shares his plan. They get a huge shock seeing the video of their mansion blasting. They run to the house to save the family. They get another shock when they find Rudra strapped up with the bomb. They find some way to save Rudra. Rudra warns them to stay away. Shwetlana tells them that the bomb can’t be removed easily. Shivay threatens to kill her. Shwetlana tells them that the bomb is password protected. She asks them to agree to her demands if they want to see Rudra alive. She asks Shivay to reveal the Kalyani mills truth to the media and prove his family wrong.

Shivay refuses to listen to her. She asks him to do this if they want Rudra’s life. She asks Shivay and Omkara to hide the truth from their wives. Anika and Gauri fail to know anything. They try to know Shivay’s planning. Shivay and Omkara try to cover up the problem. Shivay asks Anika and Gauri to go home. He gets worried of Shwetlana’s condition. Shivay tries to give a hint to Anika about the dangers.

Anika and Gauri leave bid them bye. Shivay is sure that Anika will understand his hints and know the danger. Anika tells Gauri that something is wrong. Gauri tells her that Shivay loves her a lot. Anika understands Shivay was lying and trying her about the problem. She tells Gauri that Shivay wanted to warn her about the hidden danger. They spot Shwetlana at the office. They understand Shwetlana has done something. They get prepared to save the Obros. Anika tries to find the threat on Shivay. She understands the hints and learns Rudra’s life is in danger. Shivay and Omkara try their best and save Rudra’s life.