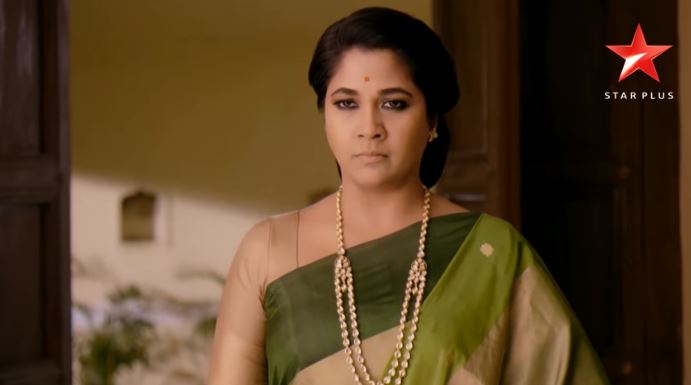 Anami gets into an argument for the conditions she kept for allowing Vatsalya’s project. Satrupa tells her that Sudha is their biggest enemy. She is sure that Vatsalya would have protected the family from Sudha and did the same thing as her. Anami disagrees with her. She tells Satrupa that Vatsalya was selfless, he would have never killed anyone’s dreams like this. Anami agrees to Satrupa’s conditions. She tries to get Sudha’s signs on the papers. Adhiraj is sure Sudha and Purushottam are connected. He sends the officers to Lal Mahal to nab Purushottam. Satrupa vents out her anger on Lakshya. She gets much stressed thinking of Anami.

Anami finds it very tough to cheat Sudha and use her for Vatsalya’s dreams. She doesn’t want to do injustice with Sudha. Anami falls in big dilemma. She gets keen to fulfill Vatsalya’s dreams. Satrupa finds Lakshya upset. She apologizes to him and cheers him up. Lakshya and Satrupa’s friendship continues.

Lakshya sees Anami sad and asks her to talk to Madhu if she is missing her. Anami doesn’t want to create troubles for Murari and Madhu. She calls up Adhiraj to get some help. Adhiraj meets Anami and tries to know her problems. Anami tells him that she can’t trust Satrupa. Adhiraj has a different opinion about Satrupa. He asks her to think of Satrupa, who maybe protecting her and the family by this step. He feels Sudha is wrong. He explains her that many people have different ways to get the desired results. He asks her to understand why Satrupa is doing this. He asks her to test Sudha’s intentions once.

Anami decides to take Sudha’s test. She understands what Adhiraj means. Satrupa is hopeful that Anami will take Sudha’s consent. She feels bad to deal Vatsalya’s dreams for her motives. Dada ji and Satrupa wait for Anami to execute their plan. Dada ji fills courage in Satrupa. He asks her to be strong and bear the pain if she has to protect Anami from Sudha. Satrupa is sure that Anami will see Sudha’s true face soon. Dada ji is upset that Anami is supporting Sudha, thinking Sudha is a victim. Satrupa wants Anami’s blindfold to get removed. She tells Dada ji that Anami is the one who can break Sudha’s plotted Chakravyuh.

Anami meets Sudha and shocks her by the request. She tells about Satrupa and Dada ji’s condition. She reads out the papers to Sudha. She tells Sudha that Narottam and she will have no rights on Lal Mahal, they won’t have any relation with Baldev after signing the papers. Sudha realizes Satrupa has planned well against her. Sudha tells Anami that she will not get back from signing, but this fight is for her son’s rights. She doesn’t want to give up Narottam’s rights. Anami tells Sudha that Narottam is selfless, he will not get back for fulfilling Vatsalya’s dreams. She asks him not to have any anger and revenge in heart. Narottam tells Anami that Satrupa wants to end his existence from Lal Mahal. He asks Anami how can she come with such a request. He refuses to sign the papers. Sudha feels Anami is going against her.