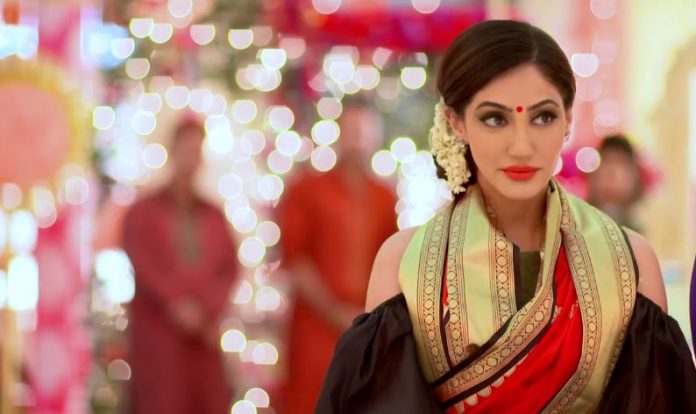 Shivay calls a press conference. He has to do a special announcement, which can create chaos in the house. Shivay addresses the media and tells about his important announcement about Oberoi empire. He knows this can break the family relations. He reveals about the partnership with Shwetlana. He doesn’t get back from breaking the family’s hearts so that he can save them from upcoming problems.

Shivay is blackmailed by Shwetlana. Shwetlana succeeds to create a storm. Shivay is connected to Shwetlana via bluetooth. He is helpless to say as Shwetlana orders him. Shivay tells them that he has called the media to make his decision official, his decision of shifting Omkara and Rudra’s shares to the new partner Shwetlana.

He says there are some changes in our company. Shwetlana then asks him to insult his brothers. Shivay gets freezed for a moment. Shwetlana demands him to do as she says, else she will play the video of Kalyani mills incident. Shivay gets compelled to obey her. Shivay speaks bad about his brothers. Shivay tells the media that Omkara is an artist and doesn’t have any interest in the business. He laughs on Rudra saying it will be a big thing if Rudra manages his studies, what will he look after the business, I don’t remember when Rudra went to the college last time. Anika can’t believe Shivay is speaking against his brothers. Rudra believes in Shivay. Tej gets enraged hearing Shivay insulting his sons. Anika and Gauri know Shivay loves his brothers a lot.

Tej feels Shivay has cheated Omkara and Rudra. Anika and Gauri also witness the change in the family by Shivay’s decision. It gets shocking for everyone. Shivay is not giving an answer to the family. This upsets them even more. Rudra stays silent and supports Shivay, when Shivay insults Omkara and Rudra in front of the media.

Shivay has done this to save Tej, but the latter thinks Shivay is turning a villain for them. The media asks Shivay about his brothers’ reaction on this decision. Shivay tells them that Omkara is not here. The reporter finds Rudra present and asks Rudra about his reaction. The media surrounds Rudra and floods their questions. Shivay protects Rudra from the media. Shivay takes a stand for Rudra when he sees Rudra getting troubled by the media. He asks the media not to involve Rudra in the matter, as the press conference is about Shwetlana. He asks them not to trouble Rudra. Tej stops the media angrily and calls off the press conference. He vents out anger on Shivay for saying nonsense about his sons. Tej loses his cool. Reporters make the family clash a big news. Tej will be soon throwing Shivay out of the house. Shivay’s Vanvaas track will be seen next.