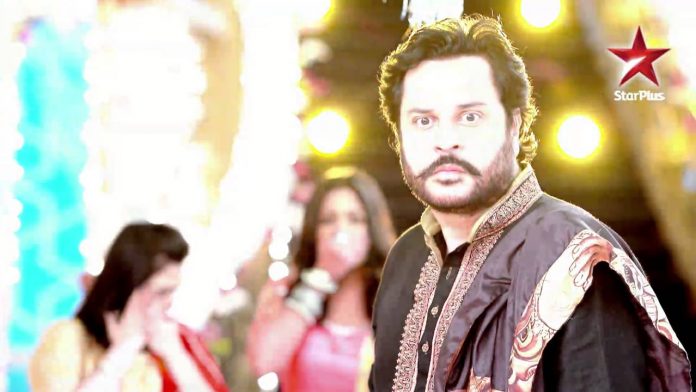 Shivay calls the press conference to make an important announcement. Everyone tries to guess the reason behind Shivay’s move. Shivay tells everyone that his ancestors have worked hard for making the Oberoi empire, which is their real identity and pride. Shwetlana threatens Shivay to just do as she tells him, else she will play Tej’s crime video on the screens. Shivay gets compelled to announce that Shwetlana is his new business partner, who holds Omkara and Rudra’s shares.

Shwetlana keeps a watch on him. The reporters ask Shivay if he has thrown out his brothers from the company. Shivay feels bad to answer. Shwetlana makes the things more tougher for him. She demands him to insult his brothers in front of the media. The media asks him if his family got divided. Shwetlana asks him to get into action and get insulting Omkara and Rudra. Shivay tells them that his brothers don’t deserve any share in the company, as they are not worth it, they are not connected to the business, being incapable of managing it.

Shivay insults Omkara and Rudra to be so immature and brainless that they can’t manage anything else than their life. The family gets tears hearing Shivay’s bitter words. Shivay just speaks everything as per Shwetlana’s written speech. Tej gets angry. Shwetlana asks Shivay to just manage his family’s anger and hatred now. She feels happy seeing Shivay breaking his family himself. The media then targets Rudra. They hit Rudra with their questions. Shivay doesn’t want Rudra to get more hurt. Tia provokes Tej into doing something. Tej shouts at the media and makes them out of the house.

Tej confronts Shivay for his move. He asks Shivay why did he insult his sons in front of the media. He asks if it was not enough that he has snatched his sons’ rights. He warns Shivay to be ready for his move now.

Pinky defends Shivay even after seeing everything. She doesn’t feel Shivay did anything wrong. She asks Tej to know that its just Shivay’s right on the Oberoi empire. She tells Tej that its just Shivay’s hard work behind the company. Shivay sees the family breaking. Anika asks him to reveal the reason behind his move, else the condition will get more worse. Anika asks Shivay did he do everything to see this day. She asks if the reason is bigger than the family issues. Tej collapses, failing to tolerate the changes. Shivay gets a huge shock knowing about Tej’s state. Jhanvi reminds Shivay his vow and asks him to leave from the house. She asks him not to return to their family again.