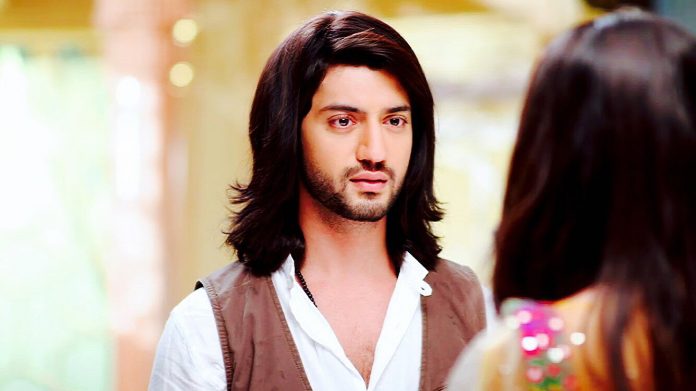 Gauri receives the organic vegetables. The man gives her the bill. Tia instigates Tej again. She asks Tej are they still following Shivay’s decision by buying organic stuff, why are they paying for this, when Shivay has left. Gauri takes Shivay’s side that he ordered organic vegetables for them, even when he is away, he cares for everyone’s health. She defends Shivay, which makes Tej angered. Tej asks Gauri why is she supporting Shivay after what he did with Omkara. Tej raises a question on Shivay’s decisions taken till now, was he deciding for the family’s welfare or his profits.

He says Shivay is selfish, he just cared for his well being, he ordered organic vegetables for himself, its just his favorite vegetables, we will not pay for this. Pinky asks Tej would he not pay for vegetables, after snatching all the business from Shivay. She tells everyone that Tej is feeble minded. She taunts him that Shivay has thrown all his shares on Tej’s face. Tej asks Pinky to pay for the vegetables.

Tia ignites the fire. Pinky asks Tej does he not have such poor standards, can’t he clear a small bill. Tej and Pinky have a big argument over Shivay’s leaving from the family. Tej accuses Shivay for burning their hearts and ruining their trust. Pinky asks Tej not to blame Shivay again. They continue hurting Dadi by their fight. Dadi asks them to stop it, as Shivay is not between them now. Dadi wishes Omkara comes home soon and handles the matter.

Omkara returns home and learns about Shivay’s departure. Rudra tells him everything, how Tej got a heart attack post the press conference, which made Jhanvi order Shivay to leave from the house. He makes a video call to Shivay, who asks him about his trip. Omkara expresses his annoyance and complains. Omkara asks Shivay how did he not think for them once. He gets upset with Shivay. He asks Shivay how could he leave the house without waiting for him.

Omkara and Rudra don’t accept the house division. They question his decision. Shivay tells Omkara that he can’t tolerate his annoyance, it just hurts his heart. Omkara asks him to justify himself, what’s the reason behind this, how could he break his brothers’ hearts. He says even though you are elder, why did you take this decision, we don’t need any business shares, the business and this house will always be yours, we don’t want anything that divides us. He tells Shivay that even his brothers belong to him, no one can snatch anything from him. The brothers have unity and love, while the elders have fights going on. Will Omkara and Rudra convince Shivay to return home? Keep reading.