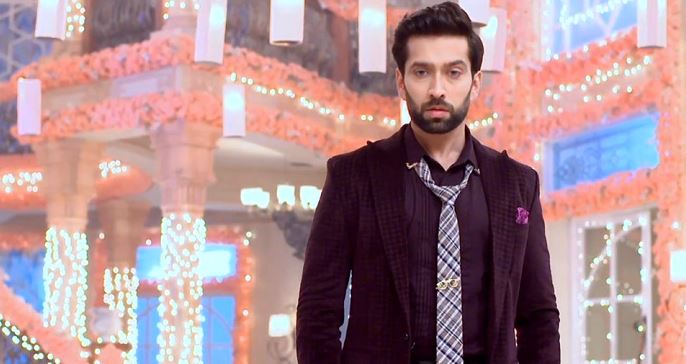 Anika prepares to do the duties of an ideal wife. She senses someone around. She misses to see anyone. Shivay and Anika try to adjust in the new life. Anika finds hard to wake up early. She wakes up late and looks for Shivay. Shivay manages everything by himself. He asks her not to take stress about becoming an ideal wife. He is sure she will manage well some day. Shivay prepares breakfast for her. Anika promises to make better breakfast for him. Meanwhile, Omkara and Rudra miss Shivay at home. Shivay leaves for a business deal. He asks Anika to take good care of herself. Anika suspects someone to be around. Omkara gets upset with Gauri for failing to stop Shivay and Anika. Gauri apologizes to him.

He couldn’t forgive himself. He gets burdened by Tej’s mistakes. Gauri asks him to get Shivay and Anika back. Omkara asks her to keep the family united and help him in fulfilling the task. She agrees to support him. Shivay goes to meet an estate officer. He gets to see misbehaving people in the office.

Shivay tries to get the documents for establishing his business. The man asks for bribe, to which Shivay refuses. He gets much upset seeing the bad way of people’s work. Anika prepares food for Shivay. She senses someone in the kitchen. Shivay angrily breaks the phone. He goes to buy a new phone. He gets into a funny conversation with the shopkeeper. He breaks phones he dislikes and breaks more records of his act. The shopkeeper controls his panic. Shivay asks him not to panic and buys plenty of phones to vent out anger.

Omkara and Rudra make a video call to Shivay and express their annoyance over his leaving. The brothers have an emotional talk. Omkara doesn’t want Shivay to bear everything alone. He tells Shivay that everything will belong just to him. He complains that Shivay didn’t do good to leave without thinking for them. Shivay asks them to be positive and accept the change. He is sure they will become responsible from now on. He asks them to consider this as their brother’s holiday. Omkara and Rudra don’t forgive him for his big move.

Omkara doesn’t want to see Shivay away from them. The brothers vow to stay united forever. Anika fears to tell Shivay that she has burnt the dish. She lies to him that she didn’t like the vegetables and didn’t cook anything till now. She asks him to get his favorite vegetables. Shivay gets a task to visit the market and shop for grocery. Omkara and Gauri start managing the house and business. He gets grateful to her for her forever support.