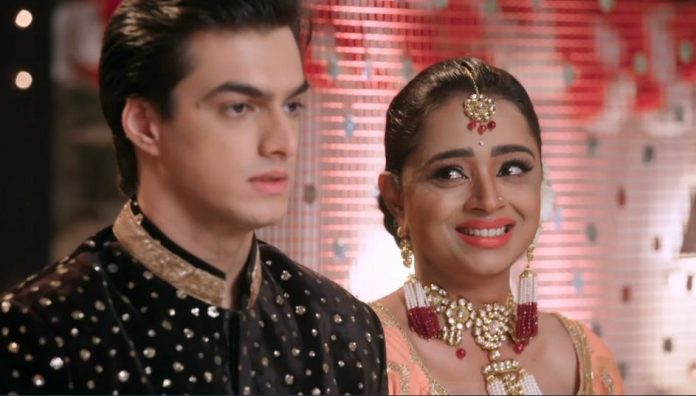 Naira and Kartik try to explain Suwarna’s pain and sacrifice through a skit about Devki’s sacrifice of giving away her son Krishna. Kartik and Naira play Vasudev and Devki, and try to highlight that it was much tough for Devki to give away her son. Naira raises the question if Vasudev supported Devki only when she shared her decision with him, would any man not support his wife if she takes such a sacrificing decision and abandon her son without his consent. Aryan gets angered and stops the play. He scolds Naira and Kartik for supporting Suwarna. He tells them that Devki’s fear for her son was justified, but Suwarna is not any Devki, she was selfish to abandon her son for her greedy motives.

He points a finger at Suwarna for showing her great sacrifice and hurting him. He gets insulting Suwarna. He tells them that he can never make any relation with her. He angrily hurts Suwarna, while Kartik comes in between to save her. Aryan ends ties with Suwarna. His hatred hurts her a lot. Kartik asks Aryan to understand his mum. Aryan tells Kartik that Suwarna will get punished one day. Kartik doesn’t like to hear anything against Suwarna. He addresses Suwarna as his mother, which emotionally connects to her heart. The family gets happy with Kartik’s acceptance and love for Suwarna.

Kartik tells Manish that Suwarna has done everything for them. Kartik apologizes to Suwarna for not realizing her love till now. Kartik and Suwarna have an emotional moment, which drives Aryan more crazy. Naira gets happy with Kartik’s doings. She thanks him for everything. They hope Manish comes in the party and forgets his annoyance. They wish Manish and Suwarna unite. Everyone prays that everything goes fine in the anniversary party. Akhilesh and Surekha support Suwarna. They are happy that Suwarna’s wait for getting Kartik’s love got over. Dadi fears things can go wrong because of Manish’s annoyance. Aryan attends the party and waits to see Suwarna’s sorrow over Manish’s absence. Kartik and Naira wait for Manish’s arrival. Aryan is sure that Manish will not forgive Suwarna.