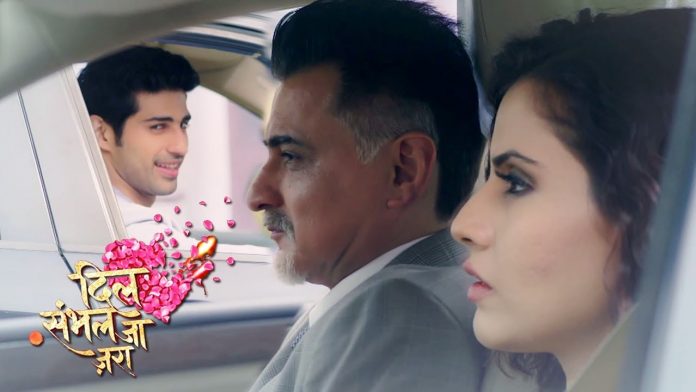 Ahana misses her dad. She thinks of his words and realizes she has to go ahead in her motives. She doesn’t want to forget her aim. She makes a promise to herself that she will not let her marriage break. She vows to become a good wife. She decides to win Roshni and Aarav’s trust. She doesn’t want to lose Anant at any cost. Roshni asks Anant to permit her to meet her friend. Anant refuses to her, which turns her upset. Anant thinks to meet Rehaan and call him back. Anant meets Rehaan. He asks him to come back home for everyone’s sake. Rehaan gets glad that Anant called him back. He tells Anant that he will come once his studies finish. Anant asks him to come home and finish studies. He invites him for lunch at Laila’s house. He wants Rehaan to complete his family. Rehaan accepts his invite.

Ahana asks Anant to trust Roshni and let her go. She promises to safeguard his children. She asks him not to stop Roshni and instead support her. She asks him to let Roshni go to her friend’s place, as girls make memories this way, its quite normal in her age. Anant worries for Roshni’s safety.

Ahana tells him that Roshni will rebel if he stops her. She asks him to fill trust in Roshni by his support. Anant asks Roshni to go to her friend’s place. Roshni gets glad knowing Ahana convinced him. Roshni hugs Ahana and thanks her. Ahana feels Rahul’s teachings are helping her in making everything fine. Roshni calls her friend and confirms that she is coming. Anant and Ahana spend some time.

Anant tells her that Yamini is mature, she understands they need privacy and left with Aarav. Ahana asks him not to praise anyone in front of his wife. Ahana promises him that she will take care of Roshni and Aarav. Ahana and Anant spend some romantic time. Rehaan prepares to go home. He shares his tensions with his girlfriend. He feels he should have told the truth to Anant. He doesn’t want Ahana to take more advantage of Anant. Vyoma asks him not to worry for himself, and go ahead to tell the truth to Anant. Rehaan doesn’t get self centric. He tells her that he loves Anant a lot, and he can do anything to protect him. Rehaan comes home and breaks Ahana from Anant with a shocking revelation.

Rehaan tells Anant that he has to tell him the truth, since he loves him a lot. He exposes Ahana’s truth. He tells Anant that Ahana married him just to outdo her mum’s plans. Ahana gets worried and tries hard to convince Anant. Anant gets upset with Ahana. He feels Ahana cheated his love. Anant’s happiness gets down. Rehaan’s imagination comes to an end when he sees Anant and Ahana romancing. He thinks of the consequences that can ruin Anant’s happiness. He decides to stop himself from breaking Anant and Ahana’s marriage.