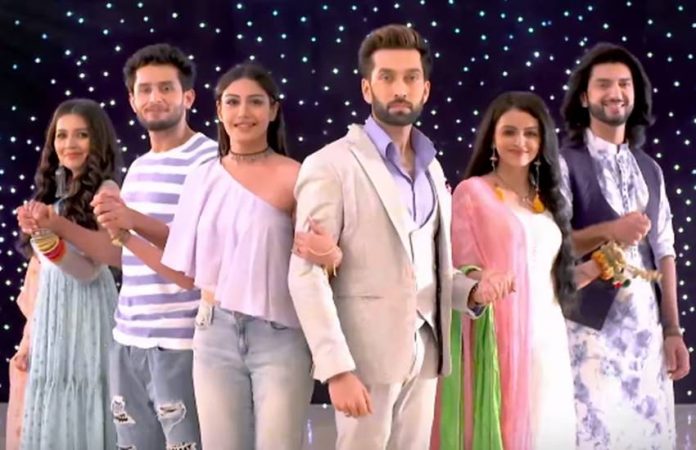 Obros and Oberoi bahus enjoy a kite flying competition. They show tashan to their competitors. Gauri tells the servants to look after all the guests well, as they are new here and have to maintain their family standards. Gauri manages the arrangements. She doesn’t know the guests well. She doesn’t want anyone to complain. Omkara surprises Gauri. Omkara and Gauri have a moment. Their romance will be seen after a long time. Shivay, Omkara and Rudra try to fly a kite and celebrate Makar Sankranti festival. Dadi invites the neighbors for the festival. Omkara asks Shivay whose idea was it. Shivay says its not my idea. Rudra tells Omkara about the competition planned by Dadi.

Shivay says we could have refused to Dadi, we don’t know anything, how will we win now, it won’t look good if we lose. Omkara asks whom are we competing. Rudra says with some kids. Shivay says they aren’t kids, they are grown ups, look there. They see the guys waiting to defeat them. Shivay and Omkara get worried, while Rudra happily takes the challenge. He boasts of his talents and asks the guys to get ready to lose.

Shivay asks Rudra not to boast much. Omkara says Gauri also said the same. Rudra gets hurt. He steps out of the game. Shivay asks Omkara what will they do now now. Omkara says I didn’t have any hope from Rudra, we both have to manage this. Shivay vents out frustration on Rudra. He gets relaxed and doesn’t want to lose. Rudra asks Shivay to mentor him, he would be knowing kite flying. He asks Shivay not to get violent. Shivay gets angry on him. Rudra says its just a kite, not an airplane. Shivay says you can’t fly it. The guys ask Obros did they lose before competing. Shivay follows some online tutorials to fly the kite in the sky.

Anika tells Shivay that she can help him, she is best at kite flying. Oberoi bahus shows the style and smartness. Anika says they are taunting so much, just cut their kite. Rudra says we are not cutting their kites, as guests are like Lord, we can’t hurt them. Khanna offers help to Shivay. Shivay asks Khanna does he know this. Khanna says I m a champion in kite flying. Khanna helps Obros and threads the kites. Anika asks Shivay why is he taking help from Khanna.

Oberois bahu see them struggling to fly a kite. They get things in their hands and fly the kite to compete with the guys. The guys ask Obros don’t they know flying the kites, why did they call the girls to compete. Anika asks the guys not to pity the girls, they are not lesser than anyone. Anika asks Gauri to hold the thread roll. Gauri and Bhavya support Anika. Anika defeats the guys and cuts down their kites. She tells them that Oberois never quit and never lose.

The bahus save the family respect by winning in the competition. Shivay, Omkara and Rudra feel proud of their partners. Dadi blesses her bahus and dances with the family to celebrate their win. Obros shout Kai Po Che and get happy for their win. Shivay and Omkara romance their wives. Veer too becomes part of the festival in an attempt to separate Shivay and Anika. Veer admires Anika. Rudra asks Veer to join them for dance. Veer gets praising Anika’s smile.