YRKKH: Naira prepares for her dance event, while Kartik prepares for his meeting. Naira wishes she keeps up to Akshara’s dreams. She prays that Kartik too fulfills Manish’s expectations. Naira calls up Kartik to invite him for the event. She asks him to be at the academy on time, so that all her low spirits get a boost. Kartik promises to be there for her. He wants to encourage Naira. Kartik feels bad that Naira is just pushing him for the business. He doesn’t understand why is Naira distancing herself. Manish gets glad when Kartik presents the work files on time. Aryan feels left out once again. He thinks to find a chance to impress Manish again. Manish tells Kartik that clients aren’t coming on time.

Veer tells Shivay about Tej’s critical state. He tells Shivay that Tej won’t be able to survive if he gets a heart attack again. Tej’s condition gets stable after Veer treats him. Tej begins his drama to convince Omkara and Rudra. He tells Shivay that he really wishes to apologize to them. Omkara turns caring towards Tej. Shivay assures Dadi that the bad time will end soon, Lord is just testing them and their strengths. He gives her new hopes and courage. Dadi feels Shivay is a blessing for her. Shivay cheers up Dadi.

Raman badly misses Ishita. She calls him up, knowing he is missing her a lot. She doesn’t want him to come home. She tells him that there is a party going on at her home. She asks him to finish his talk on phone. She manages to balance her dual roles. She feels sad to cheat Raman. Ishita tries to know about Ruhi. Ruhi stays terrified. Simmi tries to relieve her fear. Ruhi tells Simmi that Nikhil has come to stay in their building. She stops Simmi from meeting Nikhil. Simmi doesn’t listen to her. She scolds Nikhil for troubling Ruhi. She asks Nikhil to leave the house. Simmi takes his class, while Nikhil is happy that Ruhi is staying afraid of him.

Rehaan gets drawn towards Ahana. Ahana likes his company. She asks him never to tell her secrets to Anant. He explains her that he couldn’t see her in pain, he had to tell Anant so that she can get help. Ahana doesn’t want Anant to know anything so that he doesn’t get hurt. Roshni feels Anant is single-handedly mending his relation. Yamini advises her not to interfere in her parents’ relation. Roshni makes up her mind to end Anant and Ahana’s relationship.

Satrupa wants to get rid of Sudha. She throws Sudha out of the house. Sudha doesn’t lose. Sudha tries to buy some time by using her tears. She asks Satrupa to let her stay for one day, so that she can complete her fast for Narottam’s happiness. Satrupa asks her to leave the next day, without breaking her patience. Dadi keeps a peace puja for Anami. She feels Anami won’t come to attend the puja. Satrupa feels Anami has to understand the family’s efforts. She wants to prove that she has done everything for her betterment. Anami wants Satrupa to withdraw the case against Adhiraj. She makes a plan to pressurize Satrupa.

Neil tricks Vidyut by using his father’s murder truth. He tells Vidyut that his mum has revealed his crimes. He asks Vidyut to admit the truth to save himself. He wants to know who has killed Juhi. He interrogates Vidyut. Vidyut feels betrayed by his mum. He thinks his mum has done this to snatch Avni from him. Neil threatens to put Vidyut behind bars. Vidyut frames his mum in Juhi’s murder case. Neil succeeds to break Vidyut and Ragini Pandit. Neil asks Ragini Pandit to accept the blame, as Vidyut is the witness this time. Ragini Pandit asks Vidyut not to fall in Neil’s trap.

Meri Durga:
Gayatri imagines Sanjay knowing her past and ending ties with her. She fears that Sanjay can learn her truth some day. She recalls Durga’s threatening. She doesn’t want to lose Sanjay at any cost. She plans to hide her dark past from Sanjay and family. Durga understands Sanjay’s planning to learn the complete truth. She is happy that he is at least believing her, against his parents. Sanjay and Durga have a romantic moment. He doesn’t let Durga know his plans. He spies on Durga and Gayatri. Gayatri tries to hide her truth by training Durga and keeping her promise. Sanjay sees Gayatri training Durga. He hears their arguments and gets close to hear the secret they both are hiding. He gets restless to know the complete matter. Gayatri scolds Durga for using her secret. Durga apologizes to Gayatri. She tells her that she didn’t mean to trouble her by reminding the bitter past. Sanjay gets curious to know about Jassi. He gets a huge shock when he learns Gayatri is Jassi. He decides to know Jassi’s past. 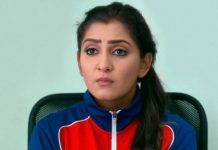 Aarti surprises Durga by a true advice in Meri Durga 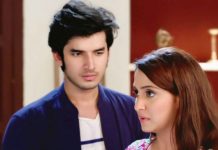 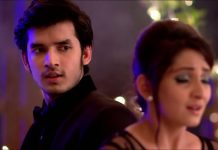