Lakshmi breaks out Durga’s pregnancy news. She scares Durga of miscarriage. Bhagat learns that Durga is pregnant. He asks Durga is this true. He asks her to focus on her training and not waste the hard work. He encourages her to believe in herself. He has much hope seeing her courage and determination. He tells her that she can still do it. He leaves the choice to her. He feels she has cheated herself, her fate and her teacher. He explains her that her life has just one meaning, that’s to make a name in the running world. Durga doesn’t want to back out. She tells him that she is in dilemma because of the pregnancy, being a woman, she has to think of the child.

Bhagat advises her to make a wise choice about her pregnancy and career. He reminds her motive, that’s to run for the nation, for the people who derive inspiration from her. He asks her to make a sacrifice if needed. Durga feels she should talk to her family and have their opinion.

Yashpal and Brij get thankful to Gayatri for saving Shilpa. Sheela gets emotional and realizes her mistake to shoo away Gayatri from home. Brij asks Sheela to see Gayatri’s big favor on them. Sheela apologizes to Gayatri. She heartily asks Gayatri to stay with them. The family bonds again. Durga calls up Sanjay and urgently meets him to reveal about the pregnancy. She tells him that she is pregnant. He asks her to just think of their families and run in the race. He supports her. 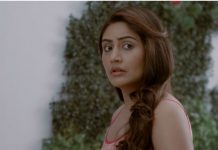