Jiji Maa:
Jayant wants Suyash to get busy in work, so that his sorrow doesn’t follow him. Suyash goes to some NGO for Jayant’s work. Suyash comes across Falguni on the way. She meets him in Lazer’s avatar. He still identifies her. She tells him that she isn’t Falguni, she is a resident of Ambua village. Suyash can’t believe her. She scolds him for hitting a vegetable vendor. She asks Suyash to pay the man for his loss and also apologize. She yells on him for being an arrogant rich guy, who doesn’t value anyone’s life.

Suyash clarifies that he didn’t hit the vendor, and instead drifted his car aside. Falguni thinks of meeting Suyash as Lazer to stay in his life, since he doesn’t want to see Falguni’s face. Suyash gets interested to know who is Lazer, and if his doubt about Falguni is true. On the other hand, Uttara gets happy on seeing Vidhaan dancing with Niyati. She wants Vidhaan to forget the pain of losing his unborn child. Niyati and Vidhaan make some useful knowledge videos to post on net, so that Niyati stays occupied in work. Vidhaan totally supports Niyati.

Kanhaiya tells Daali that he will tell his real identity to her when time comes. He asks her to have some patience and let him finish an important task. Daali searches for the clues when Kanhaiya sleeps. She gets to know Kanhaiya’s big truth by checking his bag. She gets moved by knowing his truth. She learns he has some connection with her childhood. She then prepares to surprise Kanhaiya. She organizes a feast for Kanhaiya. She invites Rathod as well. She asks Rathod about Kanhaiya. She compels him to reveal about Kanhaiya’s secret identity. Rathod reveals the mystery by telling her Kanhaiya’s real name. Daali gets happily surprised to know Kanhaiya is her childhood love Shaurya. Daali makes up a mind to win his heart. She gets happy that Shaurya kept his promise and returned in her life. Daali aims to prove Shaurya’s innocence in the theft case.

Saisha and KK confront Kamini for planning such dirty things against Avni. Kamini accepts her doings. She tells them that she will punish Avni and send her to jail. Saisha gets warned by Kamini. KK feels ashamed of Kamini. He wishes Kamini changed into good. Kamini doesn’t want to mend herself. Saisha stays worried for Avni. Avni gets a surprise by Mogli and kids. She asks Saisha what is bothering her. She doesn’t want Saisha to take any stress during her pregnancy. Saisha tells her about Kamini, who is hell bent to take revenge. She asks Avni not to worry for her, as KK is with her. Avni asks Saisha to just focus on her life. She wants Saisha to stay strong and happy.

Satya offers lift to Susheel. She doesn’t trust him. He conceals her identity and drops her to Sarthi/Fighter Didi’s house. Susheel gets back to the point from where she started. She thanks Sarthi for supporting her journey. She tells her that she wants to get justice for herself and her family. She didn’t imagine she will hide from everyone, because of Leela. Sarthi tells Susheel that very soon everything will get fine. She explains Susheel that Satya has helped them a lot. Susheel tells her that Satya has cheated her, abandoned her by insulting her for everything. She doesn’t want to tolerate wrong. Sarthi tells her that Satya was provoked to go in a wrong direction by Leela and Soumya, but he has realized his mistake and rectified himself.

Mayavi Maling:
Antara requests the tribal chief to spare Chegu’s life. She makes Chegu promise that he won’t keep any relation with Maling Rajya. She warns him against befriending princess Eshwarya. Chegu gets to spot Eshwarya in Kalkivan. He alerts her about the dangers. He asks Eshwarya to return to Maling. He finds the weather stormy. He tells Eshwarya that he will drop her to the palace for the final time. He makes her promise that she won’t return to Kalkivan again. Angad and his brothers meet with an accident while they hunt for sharks. Angad plans the accident so that he lands in Maling Rajya to spy on Eshwarya. He follows Madhumali’s orders. He tries to know from where did Eshwarya attained the special powers.

Shil Aditya learns about Angad’s accident. He gets Angad and his brothers treated by Vaid ji, fearing for their lives. Pranali wishes Angad to be fine. Vaid ji assures Maharaj Shil Aditya that the guests are recovering. Angad gets close to see Chegu when the latter drops Eshwarya to Maling. Chegu manages to escape. Angad pretends to stay ill. He uses the ring given by Madhumali to control Pranali. He asks Pranali about Eshwarya’s whereabouts. He learns that the ring is losing its effect. He couldn’t get any answers from Eshwarya. He then learns that Eshwarya had visited Kalkivan.

Naira and all the women capture Kabeer. They show him that a woman can take Durga’s avatar when someone attacks their esteem. They want to prove to Kabeer that women aren’t weak, they can take any avatar in the time of need. Naira tells him that they are very much capable of protecting themselves, they will not give any right to such men for hurting their dignity. They punish Kabeer for stalking Naira and cheating them. Kirti beats up Kabeer. She vents out her anger as she has lost her child because of him. Suwarna scolds him for misusing their trust and goodness. Naira asks Kabeer how could he stalk her. She explains him the crime of stalking someone. Kartik rushes home to protect Naira. Kartik and others get to see Naira punishing Kabeer for his crimes.

Raman plans to surprise Ishita. He gets a pretty dress and ring for Ishita. Raman’s surprise gets happily accepted by Ishita. Ishita gets touched. She thanks Raman. Ishita wears the gifted dress. Raman and Ishita romance. Their happy moments are seen. Raman wants Ishita to always keep smiling, so that he can also stay at peace. Ishita likes the new flavor in her life. She thanks Raman for the wonderful surprise. He tells her that they will always keep their life full of romance, so that no tensions touch them ever. He wants to spend time with her. She feels lucky to get him. Iyers get glad knowing everything between Adi and Aaliya is getting fine. Iyers try to make their relations with Bhallas better.

After Anika’s return, everyone gets more pampering Anika. Gauri spends time with Anika. They recollect their childhood moments with their dad. Shivay gets glad to see them happy. He wanted them to have this happiness in life. He tells Omkara that both of the sisters deserved this happiness. Omkara tells him that they should leave them to themselves. Shivay takes him along for a serious talk. Rudra joins the brothers and adds his humor effects. He asks them if Gauri and Anika have thrown them out of the rooms. Shivay clears that they have given them some time to spend. Rudra asks them not to turn jealous seeing the sisters’ bonding. Shivay asks him to spend time with brothers like before. Rudra feels lucky that Bhavya is free to be with him. Shivay and Omkara miss out their wives, who talk non stop for hours. Rudra tells them that their chance will never come. 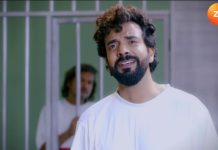