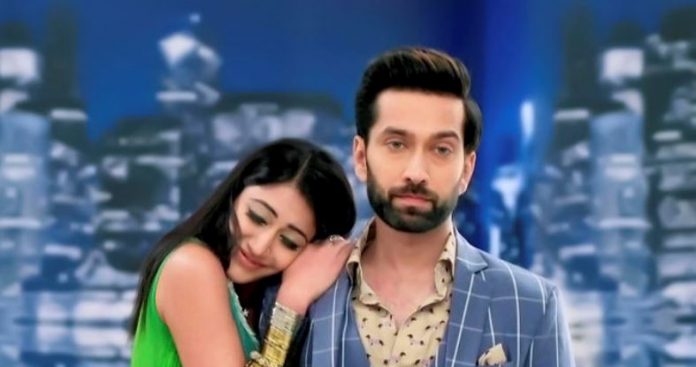 Anika and Shivay have a cute argument. She asks him whether he really doesn’t know about Ishq wali selfie if he is a true Ishqbaaz. He tells her that he has no idea about Ishq wali selfie, he has just heard about Ishq wala love. She tells him that she wants a lovely selfie with him. She teaches Shivay how to pose for the special selfie. She gets taunting him when he boasts of himself, comparing himself to a filmi hero. She asks him not to think he is SRK. She asks him to tone down the style and pose with her. Shivay and Anika have their romance going while taking selfies. Anika gives him some love lessons. She asks him to open his arms and hug her, while they pose for the picture. Shivay happily surrenders to her and clicks selfies with her.

After the selfies, he kisses her and tells her that he has a good news for her. She asks him if his meeting went well, that he is very happy and agreeing to all her silly requests.

Shivay tells her that she has guessed right, the meeting was amazing and the clients are sealing the deal with them soon. He gets much excited for the Japanese collaboration. She congratulates him. She tells him that she will post their special selfie on the social networking site. He doesn’t want this to happen. He asks her not to post their personal pictures online. She says the entire world does this.

He tells her that he doesn’t like his personal moments and life to reach out to people, he wants to have his privacy. She asks him what will happen if the world finds them happy together. She gets upset with him. He asks her to forget the matter. She tells him that Omkara and Gauri have posted their pictures too, and she also wants to post pictures to show their perfect marriage to the world. He tries hard to convince her not to do so. She doesn’t listen to him and posts their selfie pictures and funny dance video online. The clients get to see Shivay’s dance video on the networking site. They cancel the deal with Oberois. They feel Shivay doesn’t own any brand, as he looks like a common man. Shivay gets insulted by the clients. They call off the deal. Shivay gets angered seeing the video playing on the screen. He rushes home to confront Anika for her stubborn move.