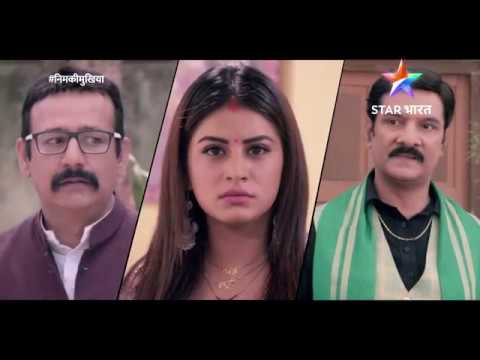 Abhimanyu is upset with Nimki, as she has joined hands with Nahar Singh. He questions her about joining her enemies. He gets too angry in his speech. Nimki tries to explain him that she has to work with Nahar and Kundan for the welfare of the village. She asks Abhimanyu to think of the developments. He reminds how Nahar played with villagers’ life. She tells him that Tetar was defamed in the scam, she has to find proof in Tetar’s favor and send it to Babbu. He asks her if she is doing everything for Babbu Singh and in-laws. She taunts her for becoming a good Mukhiya in a political way. He asks her if she is just concerned for Tetar Singh.

She then explains him the real motive behind her move. She makes him hear the recording where Nahar and Kundan accepted their crimes. He asks her why didn’t she get them arrested.

She tells him that she is blackmailing Nahar and Kundan by using the recording. She wants to develop the village by making the wrong people help the cause. She explains him the deal. She says Nahar has taken much money from public, and that’s why I made Nahar serve the public back, getting the culprits arrested won’t help the villagers. She explains her smart move. Abhimanyu still wants to go legal way. He tells her that blackmailing and compelling Nahar isn’t right, she should seek help from police.