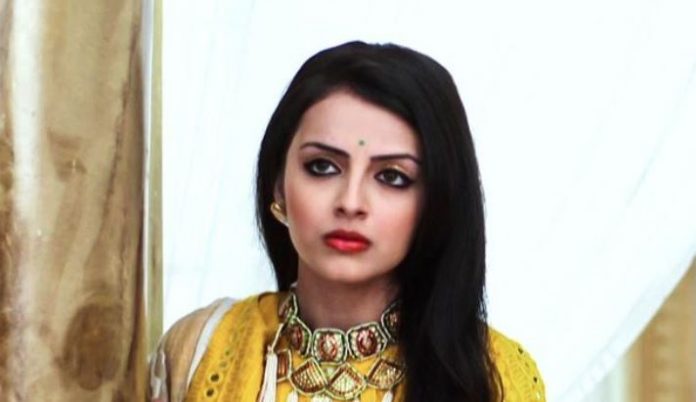 Everyone believes that the superstar Abhimanyu is a gem at heart, who is in much love with his wife Roshni. Anika too wishes that Shivay becomes lovey dovey like Abhimanyu. Gauri tells Anika that Shivay loves Anika a lot, which is very much evident. Rudra shows off his physique to Abhimanyu to gain the media attention. He turns everyone tired of his silly reactions. Rudra wants to prove his physique is better. Gauri wants a selfie with Abhimanyu. She is his big fan. She wants to meet him and have a talk. Everyone doesn’t show interest in supporting Rudra in his weird plannings. Shivay helps out Gauri and introduces her to Abhimanyu. He tells Abhimanyu that Gauri is his big fan and wants a selfie with him.

Abhimanyu finds himself lucky to get Gauri with him in the frame. Gauri turns nervous to talk to Abhimanyu. Abhimanyu tells her that he respects beauty. He tries to flirt with her. Gauri falls in his words when he makes excuses and corners her for taking a selfie. She dislikes when he behaves improperly and holds her in a wrong way. She tells him that she doesn’t like to get close to the celebrity. He tells her that he has held her as every fan wants the celebrity to get close. Gauri feels Abhimanyu isn’t a right man. She gets confused over his behavior. She tells Anika that Abhimanyu is strange, the way he held her was cozy, which she didn’t wish to tolerate. Shivay upsets Anika by not complimenting her enough to make her glad. Anika tells Shivay that she will leave from the house. He finds her dramatic.

Omkara connects with Roshni and wants to present his art so that he can get a boost in career. He asks her to see his art collection. Abhimanyu seems more interested in Gauri. Roshni likes Omkara’s artistic paintings. Abhimanyu asks Omkara if Gauri is his inspiration. He compliments Gauri’s beauty. Omkara and Roshni get busy in the art exhibit, while Abhimanyu misbehaves with Gauri. Gauri understands his evil intentions. He asks her to value his attention. He doesn’t get scared of Omkara. He tells Gauri that Omkara is doing the same, as he is impressing Roshni to sell his art. He asks Gauri to please him, if she wants Omkara’s career to form well. Gauri warns him against his misbehavior.

Abhimanyu tries to take advantage of Gauri. Gauri runs away from him, while he chases her right inside Oberoi mansion. Shivay looks for Anika to make an apology. He gets a letter from Anika, and learns that she has left the house. Anika pulls his leg by hiding inside the room. She wants to see if her leaving affects Shivay or not. She expects him to call her. Shivay informs Khanna to confirm all his meetings, as he got tension free since Anika has left. She gets upset with Shivay. Abhimanyu tries to molest Gauri. He turns creepy. Gauri tries to seek help from the family. She attempts to save herself.

Shivay goes to check for Gauri. He gets called by the guest. He fails to reach Gauri. Anika gets angry on Shivay. Anika decides to teach him a lesson. Shivay asks Anika if she didn’t leave. He asks her why is she here. Anika questions on his change. He taunts that she doesn’t change ever, so he wanted to spice up his life by changing himself. Anika asks Shivay why did he hurt her this way, he has shown her real worth in his life. Shivay tells her that he has seen her inside the room and reacted that way. He mocks Anika for her silly plans. He tells her that he doesn’t need to praise her, as he knows she won’t leave him ever. He then praises Anika’s beauty and pleases her heart. They have a sweet moment. Oberois will take a stand for Gauri, against Abhimanyu’s cheap act. The important of woman’s dignity will be highlighted next in the show. Keep reading.