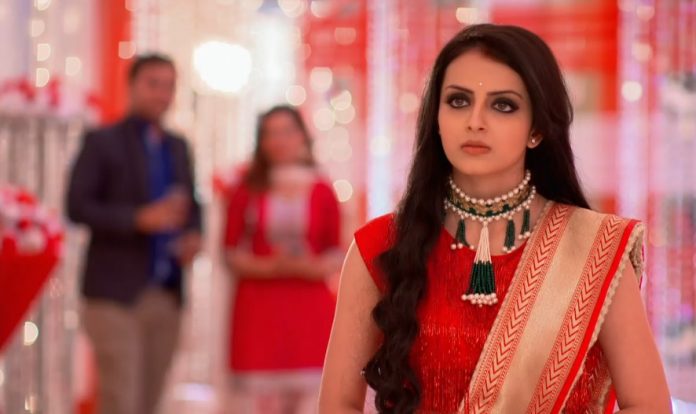 Shivay tells Bhavya that Anika knows well what to do and how to expose Abhimanyu’s true colors. Anika brings out Abhimanyu’s cheapness out in front of the world. Shivay, Anika and Bhavya make the media watch Abhimanyu’s dirty moves live. They learn about Abhimanyu’s truth. Abhimanyu flirts with Anika and asks her for indecent favors. Anika slaps him and gets him caught by Abhimanyu. Abhimanyu gets thrashed by Shivay, right inside the party. Shivay tells the media that Abhimanyu is a molester, he has a dirty character, unlike he is projected in movies. He tells them that though Abhimanyu plays heroes in movies and saves the heroine in the scene, in real life, he is a womanizer. Abhimanyu denies the blames. Anika then reveals her identity and tells them that she has done this to expose Abhimanyu’s truth, which the world deserves to know.

Abhimanyu tells the media that this is just a publicity stunt planned by Shivay, so that his mobile brand gets a hype. He tells them that he has earned a big name by his hardwork, he isn’t any struggling actor to fall low and try such things. Shivay tells Abhimanyu that many people know his truth, who has worked with him and know his evil intentions. The girls come ahead and testify that Abhimanyu has misbehaved with them as well. Shivay wants to get justice for all the girls, disrespected by Abhimanyu. Shivay asks Gauri not to stay silent, as it will be her failure. He encourages her to open up and not feel defeated. Anika tells Gauri that they aren’t weak to bear the tortures. She asks Gauri to punish Abhimanyu in front of the world.

Omkara gets a big shock on knowing Abhimanyu’s dirty crime to disrespect Gauri. He consoles Gauri and asks her not to feel guilty. Omkara reacts angrily and beats up Abhimanyu. He doesn’t want to spare Abhimanyu’s life. Omkara totally supports Gauri. Shivay tells Omkara that Gauri isn’t weak, that she needs anyone else to bash up Abhimanyu. He asks Gauri to answer Abhimanyu. They all encourage Gauri to gain courage and fight back. Gauri slaps Abhimanyu and exposes his true colors, by revealing the bad incident of her life. She tells them that she has managed to save her respect, but her wound on the heart won’t get less because of his misdeed. She tells them that Abhimanyu tried to stain her character. She proves Abhimanyu’s crime.

Abhimanyu tells the media that Gauri is framing him when he refused to have an affair with her. Gauri reprimands him for using someone’s goodness and patience. She doesn’t want to bear the injustice. She vents out her anger on him. She tells the media that she is lucky to get a supportive family, but the girls whose families don’t support them aren’t lucky to come out and expose the culprit. She wants such men to be punished, so that girls don’t face such traumas in life. Shivay and everyone salute Gauri’s bravery. Shivay tells them that the world is changing, but he regrets that the society’s customs and thinking are still the same, as a girl is blamed for any bad incident, the criminal isn’t blamed.

He tells them that they have to together take an initiative by teaching men to respect women. He tells them that its their firstmost duty to spread the awareness and protest against such wrong doers. Media targets Abhimanyu, when he fails to prove himself. He denies the blames and wants an easy escape from the party. Roshni gets inspired by Shivay. She finally speaks up and exposes Abhimanyu’s truth. She doesn’t want to cover up Abhimanyu’s crimes further. She tells the media that she was silent for her public image and family pride. She gets fed up with Abhimanyu’s dirty mind. She breaks up with him. She tells him that they aren’t a couple anymore. She tells the media that she is the witness of Abhimanyu’s lewd doings. She slaps Abhimanyu and dumps him. Omkara feels sorry that he couldn’t protect Gauri. He asks her to forgive him. Gauri apologizes to him as he lost the deal. Omkara tells her that she matters to him than any deal. Shivay tells them that the matter doesn’t end here, they have to get Abhimanyu punished.