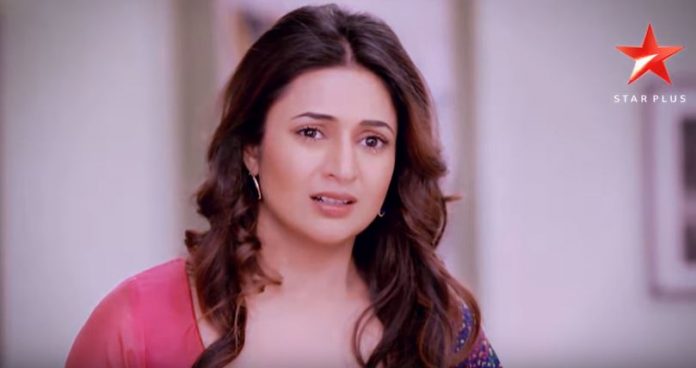 Raman recommends Ishita as a dentist to someone. He tells his friend that Ishita is the best dentist in town, she treats everyone well. Ruhi gets happy hearing Raman’s sweet words about Ishita. Raman’s friend meets Ishita at her clinic and asks her to treat his tooth ache. He reveals that Raman has recommended her name. Ruhi tells Raman that she likes him when he appreciates Ishita. She tells him that she took Pihu to Ishita to get her tooth problem treated. She feels Raman is changing for the good. Aaliya meets Shagun. Shagun thanks her for motivating her. Shagun decides to listen to Aaliya and resume her NGO work. Shagun asks Aaliya to meet a guy, whom she has chosen. She wants Aaliya to remarry.

Aaliya doesn’t want to remarry and refuses to her. She tells Shagun that she just wants to focus on her career. Shagun wants to find some way to convince Aaliya. Ishita asks Roshni to stay at home and not go anywhere. She wants Roshni to take care of herself. She reminds that her appointment with doctor is fixed. Raman helps Pihu and spends some time with her. He tells her that he got a leave today and would play with her. Pihu tells him that she wants a gift if she wins. He agrees to her condition.

Mihika tells Romi that they won’t shift anywhere. He tells her that he is tired of helping Raman, Ishita and their chilren. He feels he didn’t get any love in return, no one worries for him. He wants to shift to a new house and also start a new life by adopting a baby. Mihika doesn’t agree with him.

Pihu asks Raman to take her out to the icecream parlor. Raman meets Shagun, Aaliya and Ruhi at the place. Shagun tells them that she wants Aaliya to remarry. Shagun justifies that Aaliya is young, she can’t waste her life. Raman asks Shagun not to compel Aaliya for marriage. He wants Aaliya to be happy the way she is. Aaliya doesn’t want Shagun to pressurize her. Ishita happens to visit the same place and learns the matter. She asks them not to force Aaliya, as Aaliya isn’t able to cope up with Adi’s death. She asks them not to ruin Aaliya’s life, as Aaliya values Adi’s love even now.

Aaliya recalls Adi’s deceive. She wants to get out of Adi’s memories. She tells them that Adi never loved her, Adi doesn’t deserve to be in her memories. Ishita asks her if she will forget Adi this way. Aaliya reminds Ishita that she has shot Adi and snatched him from everyone. Aaliya decides to remarry. She asks Shagun to fix her meet with the guy. Ishita persuades Aaliya to move on by using reverse psychology. Mani realizes that Ishita has done everything to help Aaliya. He gets grateful to Ishita. She feels guilty as she has ruined Aaliya’s life. She wants Aaliya to understand her deed.

Mani asks Ishita not to feel sorrowful. Ishita tells him that she misses her family, who got distant from her after Adi’s death. She wishes she could get back to them. She apologizes to him as she can’t leave Roshni alone in such a state. Mani hates Roshni as she has come between Adi and Aaliya. Ruhi tells Aaliya that Ishita is their well-wisher. Ishita asks Ruhi to stay with Aaliya and support her. She wants Ruhi to move on in life too. Ruhi tells her that she is too occupied to think about this. She wants to focus her mind in uniting the family. Ishita feels proud and lucky to have a daughter like Ruhi. Raman deals with his dilemma to accept Ishita back. He cries for Ishita and then recollects how he lost Adi by Ishita’s mistake.