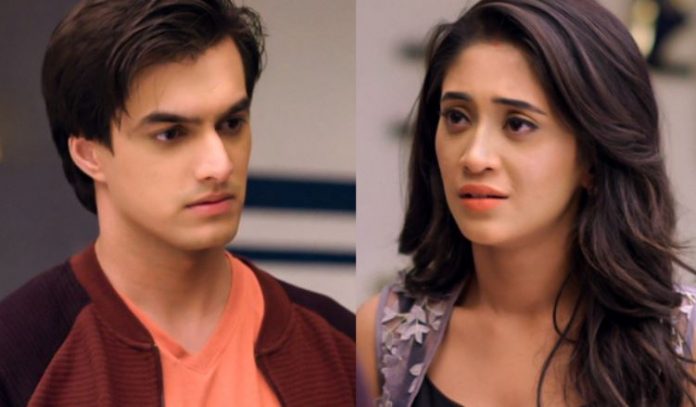 Kartik and Naira think of not going to college so that they can avoid each other. Suwarna worries for Kartik while talking to him on the call. He tells her that he doesn’t want to take the lectures. He finds Suwarna in tension and hides the matter from her. He tells her that he will talk to her later. Sudhir meets Naira and tells her that he got to know her decision of leaving Imperial college, so he got a list of other colleges so that she can get admission. Naitik asks Naira to find any good college and not waste the academic year. Naira hides the fact that she left the college because of Kartik. She goes to the college to collect her transfer certificate. She happens to meet Kartik again.

She learns Kartik has joined the college as the new trustee. The principal tells them that they have hurt themselves. Kartik tells him that some times people hurt others deliberately. Suwarna stays cautious about Kartik. Kartik goes to tell his decision to the principal. Naira meets the principal to get her transfer certificate. She changes her mind on seeing Kartik’s attitude.

She decides not to leave the college, as Kartik doesn’t care for her at all. Kartik thinks she had come to complain about him. They both make minds of continuing in the same college. A guest talks to Suwarna about Kartik’s marriage, which infuriates Suwarna. Suwarna’s wounds get fresh. She hates Naira. She has grown the gap between Kartik and Naira. Kartik bumps into Naira again. He takes the class for the freshers. He finds Naira not interested to attend the class. He asks her to leave again.

Naira gets angry and joins the class back. Kartik gives a lecture. Naira thinks of his promise. Kirti spends time with her in-laws. She wishes Naksh understands her silence and unspoken words. Kartik loses focus on seeing Naira. He gets little rude towards her. He vents out his frustration on her indirectly. Naira understands what he is up to. Kunal tries to put Naira in trouble. Kartik gets scolding Naira when he finds her disturbing the class. Kartik thinks Naira has changed her identity and name too. Kartik then helps Naira by keeping his ego aside.