Yeh Hai Mohabbatein:
Raman and Ishita reach the garage to get the car repaired. Raman’s clothes spoil. He removes his shirt. His mood spoils. Raman and Ishita reach back home. Ruhi and Pihu find Raman shirtless and make fun. They ask Ishita to help Raman. Mrs. Bhalla decides to get Roshni home for the sake of the family heir. She tells Raman that she wants Adi’s baby to get born in their presence, so that Adi’s soul can get peace. Parmeet increases the tension at home. Shagun tells Mrs. Bhalla that she will take Aaliya with her. She tells them that Aaliya should move on in life. Aaliya is much attached with the family. She tells Shagun that she wishes to live in Bhalla house. Mrs. Bhalla doesn’t let Aaliya leave. She hugs Aaliya and wants Aaliya to live with them. She scolds Parmeet for spoiling their relation. Aaliya loves the Bhalla family.

Raman asks Ruhi to help him join the family again. He doesn’t want anyone to break the family. He worries that Roshni’s entry can upset Aaliya. He apologizes as he couldn’t help Aaliya. He explains Aaliya that he will always support her, he knows her pain. Aaliya doesn’t want to accept Adi and Roshni’s child. The child will bring the family together again.

Kaleerein:
Meera falls in trouble. She gets surrounded in fire. Vivaan saves her life. She feels guilty when he asks about the baby. He takes care of her. He falls sick. Meera then worries for him and takes care of him. She talks to him while he sleeps. She apologizes to him and tells him the secret that she isn’t pregnant, she was just lying for a motive. She expresses that she loves Vivaan. When he wakes up, he finds Meera’s foot injured. He applies the ointment to her foot. Meera feels bad seeing his care. They understand each other’s pain and step ahead to aid. Meera always cared for Vivaan. He too has much concern for her. They have a cute moment.

Ishq SubhanAllah:
Zara tells Kabeer that she will always be with him. He is in pain thinking of the bad accusations. She tries to pacify him. Kabeer observes silence as there is a storm going on in his heart. Zara tells him that he shouldn’t feel guilty, she trusts him and is sure that he can’t do wrong. He tells her that he is a human and maybe he has committed something wrong, he should talk to Ruksar and know if he is at fault. He doesn’t trust himself after hearing Ruksar’s strong accusations. He doesn’t want any injustice to happen with Ruksar. Zara doesn’t understand what he means to say. She fears that Kabeer may regard Ruksar true. She hopes Kabeer’s fears prove out to be false.

Krishna Chali London:
Krishna learns that Radhe has visited the wrong places before marriage. She creates a scene and accuses Radhe for meeting Shabnam Bai. She gets the matter in front of the family. Saajan manages the problem and puts the entire blame on Krishna. Shukla gets angry on Radhe and Krishna. He tells Krishna that he has spent lakhs of money to make her bahu of Shukla family. He asks her not to take them for granted, if she is educated. Krishna doesn’t support the weird things happening in Radhe’s family. She is against their illiteracy and wrong thinking. Radhe’s mum purifies him and asks him to lead a good marital life. Krishna is trying to break the marriage by cropping issues and then go to London for studies.

Sikandar and Kulfi are together in an emotional moment. Kulfi tells the truth to Sikandar. She breaks down and tells the entire truth to Sikandar. He shatters on knowing Kulfi’s truth. He learns that Amyra has snatched Kulfi’s voice. He tells her that he will get her rights and fame which she deserves. He hugs her and expresses intense emotions. His heart melts seeing her innocence. Her words touch his heart. He feels proud of her. He asks her from which village did she come from. She then tells him that she is Nimrat’s daughter, she used to live with her uncle after mum’s death, her uncle dropped her to the train station and missed to accompany her. Sikandar stays drunk and tired. Till she tells about his background and family, he falls asleep. Kulfi finds him asleep and hugs him. She takes care of him and obtains his blessings by touching his feet.

Kartik and Naira shed tears in each other’s memory. They are distant, but always close by their yearning hearts. Kartik imagines Naira around him and feels sad. Naira sees Kartik’s ring and cries. She thinks of the time Kartik and Suwarna ousted her from the house. Naitik asks Naira to take care of her health. He doesn’t want her to go out without having breakfast. Naira tells him that she can’t miss her important lecture. Naitik is happy that Naira is getting busy in studies. He hopes she moves on in life.

Vivaan informs Suraj that Chakor has lost her mind, she is after Saanvi’s life. Suraj worriedly tries to find Chakor and Saanvi. Chakor behaves mad when she imagines Saanvi as Imli’s doll. She takes Saanvi with her and tells Suraj that she will throw away Imli’s doll and every memory. Suraj stops Chakor from the madness and asks her to realize that Saanvi is their daughter. Chakor doesn’t listen to him. She is fed up of Imli’s games. She tells Suraj that she is tired as she didn’t succeed to prove anything. She has failed to prove Imli’s existence.

Pooja and others wait to welcome Angraj. Naren excitedly introduces him as Harish and Supriya’s biological son who was declared dead when he was born. Harish and Supriya get glad and emotional on meeting Angraj. Naren tells them how he located Angraj and was searching him for few months. Angraj meets his parents and family, but it was a scary moment for Angraj as he came with the motive to get her. Anuj tells Pooja that he will beat Angraj. Pooja stops him and asks him not to tell anyone and Naren about Angraj’s past with them. Some unfortunate thing happens in Vyas mansion. Supriya throws Pooja out of the house and accuses her for one of the son’s death. Pooja cries and gets shattered. She regrets and wishes if she could change the happenings which happened three days back. She is thrown out of Vyas Mansion and has nowhere to go. 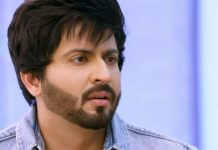 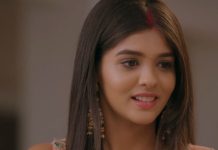 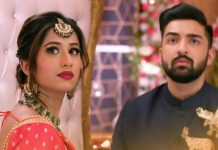