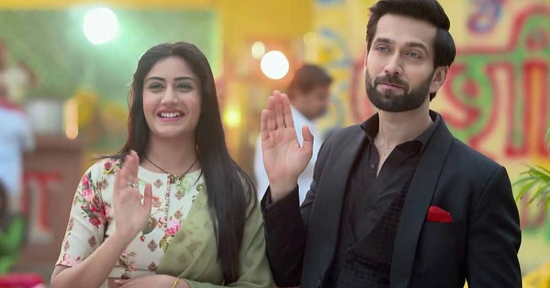 Anika meets Lallan, the man behind her designer sandals. She asks Lallan to have tea. She introduces Shivay. She tells Shivay that Lallan is the maker of her footwear. He asks her why did she call him home, they are rich and they can call any shoe designer home. Anika tells him that she is still the same and believes in saving the money. She bargains and buys the sandals for a cheap rate. Shivay asks Anika not to embarrass him by bargaining. Anika asks him not to meddle up. She tries the slippers. Shivay tells her that its not good to bargain with a poor man. She tells him that money shouldn’t affect their relationship. Rishabh sees their cute love fights and suggests that they should come for a radio show. He insists Shivika to come for a talk. He asks them to debate like always, the listeners will really like them. Shivay asks Anika how did she find Rishabh. She feels Rishabh loves Rakesh a lot. She finds him a nice guy.

Rudra and Bhavya have an argument. Bhavya tells Shivay that she wants her financial freedom, she would like to work again. Rudra tells her that he is independent in the sense that Shivay manages all his money issues. Shivay explains them that money isn’t important than relations. He is sure that their family is strongly united. Anika agrees with Bhavya and asks her to earn money, so that she stays confident. She tells Shivay that the one who spends money feels happy. She asks Bhavya to join her duty again. Omkara and Gauri congratulate Bhavya. They tease Rudra. Bhavya asks Rudra to pay for his bills himself. Shivay stays worried for Rakesh. He goes out and gets troubled by Disco. He makes his way and runs to hide. He gets to hear Rishabh’s radio show.

He sees Rakesh at his home. He finds Rakesh very let down. Shivay observes Rakesh’s behavior, which seems too depressed. He keeps a watch on Rakesh to find the truth. He feels Rakesh is fine. Shivay and Anika then visit Rishabh at his radio station and have their own show to entertain the listeners. Rishabh likes their nok-jhok and enjoys the show. Shivika goes on air and fights publicly on the radio show. Rishabh tells them that money comes between relations and turns the good terms bitter. He also gives his view on money. Shivika justify themselves and their perception. Rakesh listens their show on radio. He then gets electrocuted in his room. He dies on the spot.

The house help hears Rakesh screaming and calls up Rishabh. Rishabh plays the song and attends the call. He gets a big shock. He reveals to Shivika that Rakesh is dead. Shivay gets suspicious about Rishabh. He feels he has lost in saving Rakesh. Anika sympathizes with Rishabh. Shivay gets unclear about his death. Bhavya interrogates the house help to know how did Rakesh die. Shivay also gets to know the entire incident. Shivay suspects that there is more to it, its not just a case of electrocution. Bhavya tells Shivay that this death was accidental, the case is closed. Rishabh mourns for his brother’s death. Shivay doesn’t fall in his crying drama. Shivay tells his family that Rishabh has plotted Rakesh’s murder. They get together to prove Rishabh guilty.